RMAA Group case study: the promotion of a German online game in Russia

For a long time I have been meaning to write an article about the projects that the RMAA Group deals with. In July 2013, our team completed work on a fairly large project for a world leader in the development of browser-based online games - BigPoint company,whose head office is in Germany.

The task we were faced with was to attract a new audience to the product DRAKENSANG, by using new channels of promotion which had not been applied before. The Browser Game DRAKENSANG has been known to Russian gamers for quite a long time, so our job did not consist of a “rollout” of the game from scratch.

BigPoint contacted our office in mid-January, set us the tasks, and we started to develop the initial strategy. Negotiations were dragged out a little bit, but in general rather smooth... BigPoint’s marketing team approved all three areas that we had put forward. I often encounter situations where a foreign brand operating in the Russian market follows a set pattern, using the experience of the successful promotion of the product in other countries. But it does not always work! The market of each country has its own peculiarities. So I was very pleased when BigPoint really listened to our expert opinion.

According to our strategy we proposed that the client place adverts in two magazines for gamers called Igromania and Game Land, TV adverts (federal advertising on MTV channel [now it is known as Friday channel] and cable channel A-one [advertising in the game reviews]) and to use viral marketing. SMM, SEO and media-contextual advertising were not part of our job description; BigPoint supervised the whole Internet marketing using its own resources. 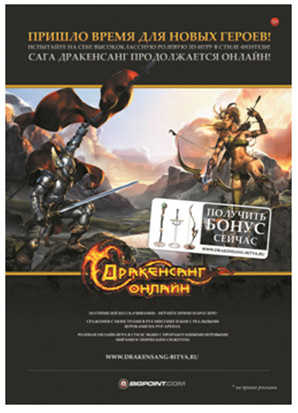 (Advertisement layout for magazines was developed by BigPoint)

I will not go into the details of the advertisements on TV and in the press, I willskip to the most interesting and creative project of our advertising campaign - viral advertising.

To begin with, who is the target audience for the advertised game?

The core of the DRAKENSANG online following are teenagers and young people aged 12-30 years (teen audience prevails). As the basis of the viral campaign we took so-called popularity gaining “let`s play” videos. What does “let`s play” mean? Imagine that you are a child, you visit your friend and watch him playing and commenting on the game. This is essentially what a “let`s play” video is. A videobloggerrecords his gameplay, and at the same time he makes funny (or not) comments. "Let`s play" video is a very popular and hyped concept in the video blogging world. For example, YouTube videos longer than an hour sometimes gain up to 1.5 million of views. Well, for those who are out of the picture, it is very popular among schoolboys :)

To create videos we employed popular Runet videobloggers: anchors of the popular show “I Like” and videoblogger Sam Nickel (the man who touched thousands of breasts in the video with Vladimir Putin). In the scenario, our bloggers are quarrelling and a dispute as to who would be best to write the “let`s play” arises between them. Basically, the idea was to organize a battle between popular Runet videobloggers to determine the best “let`s play” maker. It is important to realize that “let`s play” by itself does not have any viral component, especially if it is written by a well-known blogger.The video will score views a priori thanks to the blogger's established audience. To provide the necessary viral effect we decided to record “let`s play” in unusual places.

As a result, five viral videos were made:

1) The involvement of the audience - quarrel and dispute of bloggers:

3) The second let`s play took place in a sauna:

"moonlighter" helped Sam Nickel to run through a game level;

5) The summing-up of a battle, and a meeting of all the bloggers in one place.

I want to emphasize that we, on our part, guaranteed to the customer 300,000 views of each video over 1.5 months, i.e. we had to score 1.5 million views in a very short time.

Here we were faced with a very interesting challenge that I would like to tell you more about. We were not afraid of failing to get the promised number of views. The main problem was how to keep a record of the total number of views and how to sum it up. The point is that our main target audience is pupils and students, most of whom do not watch videos on YouTube, but directly through VKontakte. Not everyone knows that recently vk.com changed theirdisplay record algorithm. This change means the following: 1 view on VKontakte is now set as equal to 0 views on YouTube. That is, if a user watches a video on the social network vk.com, it will not be counted on youtube.com.

What has the client received as a result of the campaign? It was a fundamentally important issue for us. Our team "wrapped up” the project in three months, and we expected it to succeed.

So after the project was completed, we asked the client about the impact of the finished campaign, and we received a quite sincere answer with all the pluses and minuses pointed out. BigPoint was a bit worried about the negative comments that people had left on YouTube. Though the client realized that we encouraged the audience to "speak out", to respond and to take part in discussion. All the negative comments were connected with the discussion of the bloggers and their actions. So there was no damage to DRAKENSANG’s brand reputation. The modern Internet audience is very aggressive, because the Internet provides the opportunity to express an opinion, while staying anonymous. Negative attitudes toward adverts are quite a predictable reaction. Perhaps the most important thing is to understand the way a user selects a new game; most of them make decisions founded on the recommendations of their friends and acquaintances. In this case, ‘a popular blogger in “authority” plays a new on-line game, why shouldn`t I try?’

The overall result of the campaign according to the customer was quite positive, and the team at BigPoint underlined that it was a success thanks to the mix of different marketing tools.

With these remarkable words, I would like to end my post. We have already placed the project on the custom card of RMAA Group, where you can also read a letter of thanks, which we have recieved as a result of our cooperation with our German partner.