In 2019, the monthly number of Russian web surfers came to 96 million people. According to MediaScope, the number of web users in Russia increased by 5 million in the second half of 2019, as compared to an identical period of 2018.

Positive dynamics was demonstrated by absolutely all online advertising formats. At that, the largest growth was accounted for Out-Stream, with +165% as compared with 2018. In general, the subsegment of video ads in the Russian web is growing at the fastest pace.

Yandex and its projects traditionally make the top of online projects as per monthly reach of Russians (nearly 84 million). The second place is taken by Google that laid aboard its competitor. This being said, when it comes only to Google and Yandex search networks, the first one takes a powerful lead. According to Liveinternet.ru, in February 2020 56% Russian web surfers used Google and only 41% Yandex.

By so doing, Russian web users spent most of their time on YouTube and in VKontakte social media. 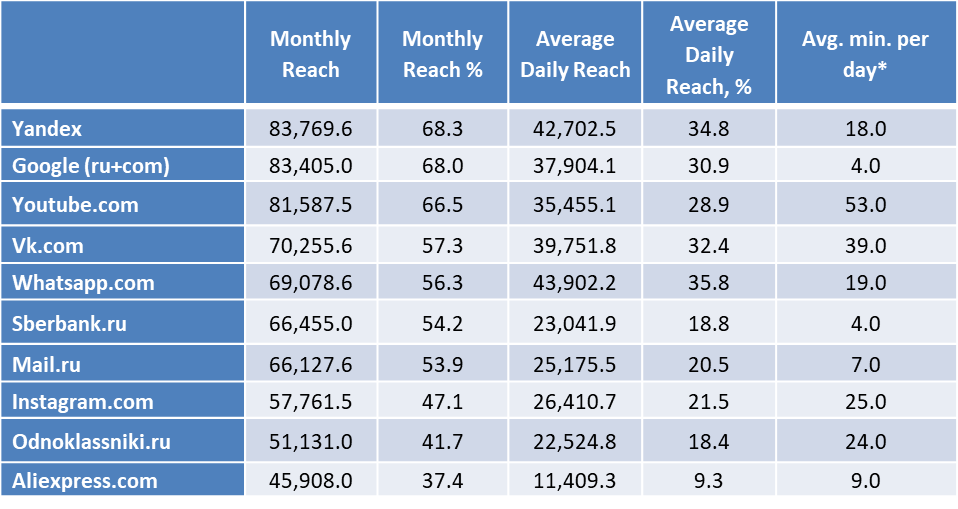 Most Popular Social Media in Russia in 2019

YouTube and VKontakte are the most popular social media sites in Russia. More than 25 million Russians visit VK and more than 19 million YouTube every day.

The video-sharing social networking service TikTok is becoming more and more popular in Russia. Priori Data, an app analytics company, shows that TikTok has been downloaded 19.9 million times in Russia in 2019 (by November).

At the end of the last year, App Annie, a company dealing with mobile industry analytics, named the most popular apps in Russia in 2010-2019, and it turned out to be WhatsApp.

According to the data from Mediascope, the media research company, more than half of Russians aged 12+ used WhatsApp in December 2019 (69 million people or 56.3%). The second place is taken by Viber with the monthly audience of 37.3 million people and 50.5% of all Russians. Top 3 is closed by Telegram with the audience of 20.5 million users, or 16.8%. The fourth and fifth ranking positions are taken by Skype and Discordapp.com with 5.6% and 4.2% respectively.

What is more, top three messengers also keep going in view of the results of a study about brand mentions in social media conducted by Brand Analytics in August 2019.

WhatsApp, as the leader, got 39% of all mentions of messengers by Russian users. For the first time in almost three years, WhatsApp outran Viber, a changeless winner of previous rankings. 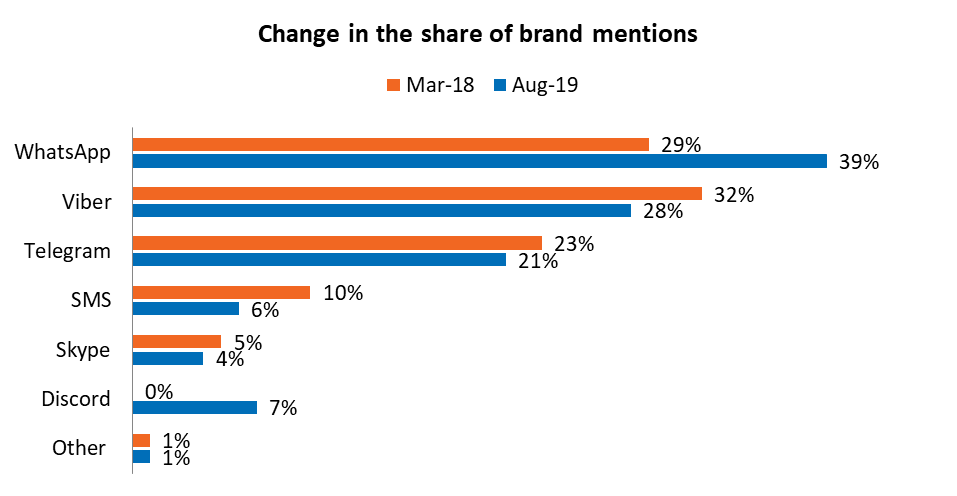 In late June of 2019, WhatsApp added “Broadcast Only” function (an opportunity to make posts only for admins) letting transform group chats into an alternative of public channels. By so doing, the messenger seems to be going to duplicate the success of the Telegram media platform. However, nothing special about this novelty is in evidence yet. The main growth driver of WhatsApp is still group chats about daily stuff.

Viber went down to the second ranking position among Russian social media, with the 28% share of all messages devoted to messengers. As compared to the previous year, its share dropped by 4%. Viber relies on public communities able to contain up to 1 million users, as well as on official business accounts for brands to interact with clients. However, at the same time, this is a major barrier for a wider use of the messenger—of all social media, the spam problem is often associated with Viber.

Telegram closes the top three most discussed messengers in social media. Its share of mentions has dropped a little bit from 23% in March 2018 to 21% in August 2019. This is a minor adjustment after an explosive growth riding on the wave of discussion of the federal media watchdog blocking Telegram in spring 2018. The basis of Telegram’s popularity in social media is public channels. Today, the forbidden messenger is a full-fledged medium having an impact on the public opinion on a par with traditional mass media.

The dark horse of the top list is Discord, the most popular text and voice chat for gamers. In 2018, mentioning of this dark horse was at the level of a margin of error, while in August 2019 it got 2% of all messages in our study without any media channels and additional functionality working for popularity of top-rated messengers. Discord is growing on the back of the major trend of ‘young RuNet’—domination of games among interests of youth under 18.