The popularity of mobile Internet is growing rapidly. In 2012, the average user spent 74.4 minutes per day on the Internet, in the second quarter of 2014, this figure reached 108.6 minutes. Following last year, the share of mobile traffic was 4%, and it will increase 15% by 2019, J'son & Partners Consulting study said.

The active subscriber base of mobile data is growing significantly faster than on PC: + 36% versus 10% for 2011-2014. Nowadays there are about 99 million subscribers in Russia, the number increased 10% in one year. At the same time, mobile Internet connectivity has reached 70%. 3G/4G network deployment, increase of user audience and consumed traffic has boost the number. 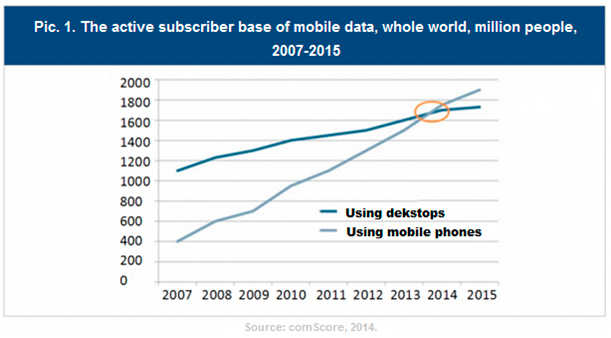 J'son & Partners Consulting says, that the main reasons are popularization of smartphones and tablets, low cost of traffic, the popularity of geolocation and video services, the growing demand for 4G. The company estimates that the average traffic for an active subscriber was 1.6 GB per month in 2014.

In Russia, the most active users are smartphone owners - 52.6 million subscribers. Although second and third places go to mobile phones and modems, in subscriber base growth they are inferior to tablets. As compared with 2013, the number of active subscribers on tablets increased 86%, while the mobile phone lost 33% and modems added 5%. Experts expect that by the end of 2018, the subscriber base of mobile Internet will exceed 150 million.

Nevertheless, there are great prospects in the appearance of ultra budgetary branded devices. When operators offer subscribers to replace an outdated phone with a modern smartphone or to buy a tablet with a package of services, they encourage customers to use more actively familiar communication and explore new opportunities.

In the conditions of economic crisis, people are less likely to save money for mobile communications, and the Internet becomes a budget way to get entertainment, as well as communicate with other people for almost free. It will boost the mobile Internet. According to mobile operator "MegaFon", sales of budget smartphones in the salons of the operator increased 35% in 2014 and the growth in the whole market was more than 100%.