Online video advertising is one of the most promising types of media ads in the world and, in particular, in Russia.

The year of 2018 became breakthrough for mobile video in terms of not only audience, but also budget. According to GPMD (the biggest seller of video ads in the Russian Internet), the expenses of advertisers who still underrate this type of placement grew more than twice. As estimated by GPMD, the share of mobile video ads in 2018 reached 40%, or 4 billion roubles of the total in-stream volume vs. only 20%, or 1.6 billion roubles a year before.

By estimate of the NSC expert group, the video advertising market in 2018 increased by 20.4% up to 10 billion rubles. At that, NSC clarified that this entails evaluation of ads that are shown in a video player during demonstration of video content (in-stream) while ads that are integrated into the website content, including texts (out-stream), are not included into this number. NSC experts expect that in 2019, in-stream growth rates will be nearly 15%.

The number of viewers increased thanks to aged people who turned to online video more often. The trend proved to be among users aged 35-64 who began watching more videos via mobile (+24%) and fewer via desktop (-17%). As a result, the average growth of video consumers in this segment made up 9%.

In the face of raised interest to watching video on smartphones, the mobile video audience increased by 11%. In December 2018, it reached 58% of the population of Russia in cities of more than 100,000 inhabitants, equal to 30.9 million people.

The number of people who watched video solely on mobile devices reached 14 million people. The exclusive audience of this type of media grew by 21%: in 2017, there were only 22% people like that among the whole Russian population; in 2018, their number ran up to 27%.

However, desktop computers and laptops still lead by time spent on video watching: in 2018, Russians spent 48 minutes a day at average on watching video websites via them and 29 minutes using mobile devices.

In 2018, the volumes of targeted placement or targeted ads with application of data, allowing the show of video only to those people whom a brand needs, went on growing. According to GPMD, in 2018 advertising with the use of demographic and behavioral targeting was almost 7% more than a year before.

However, the most demanded one is still demographic targeting that lets determine the sex and age of the audience, used by the majority of brands, while the share of campaigns conducted with the use of behavioral or interest targeting holds steady (nearly 8%). In addition to the above, for certain categories of advertisers this indicator can be many-fold higher. So, according to GPMD, in 2018 the share of placements targeted by users’ interests reached 37% in financial services, 30% in real estate, while manufacturers of cars and associated goods placed 19% of their video ads using this model.

The number of brands placing video ads without targeting, on the contrary, went on reducing and reached the lowest point for the last years. According to GPMD, the share of such shows in 2018 made up not more than 25% of the total placement volume. At that, among certain categories of advertisers the share of non-targeted shows was even lower, sometimes equal to 5%.

Mail.ru Group, another large Russian Internet holding, noted a growth of advertisers’ preferences for not just video format, but for out-stream technology: 77% investments account for it. The most popular format in this category is native video posts with an autoplay in social media feed (92% expenses in the out-stream category). The other 23% expenditures on video ads are related to in-stream videos—pre-rolls to video in social media, in the projects of Mail.ru Group, in the affiliate network. 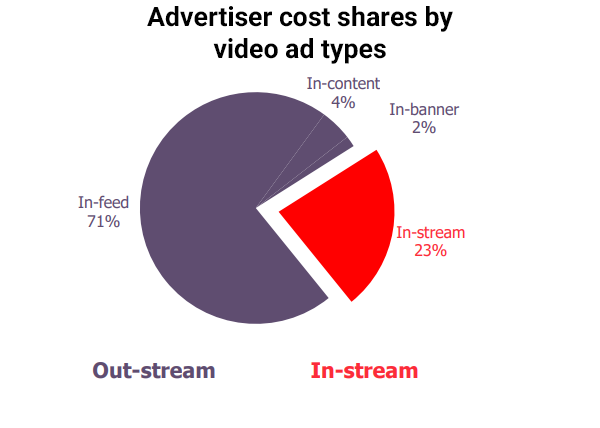 Video ads help companies raise brand awareness and loyalty (image tasks), as well as motivate users take desired actions (performance tasks). By means of in-stream clips, advertisers mostly solve the first type of tasks. In out-stream, 85% investments are used to solve image tasks and 15% to performance tasks. In-stream and out-stream clips can effectively attract audience to a website or increase conversion rates. The formats enable adding a call-to-action button that motivates users to link to a shop website or a company’s page or to install an app.

Experts analyzed how advertisers in various goods categories distribute their budgets between out-stream and in-stream video in the marketing mix. In all segments, more than half of expenses fall on out-stream clips, though in some categories the in-stream is only slightly inferior. For instance, the highest shares of investments in in-stream were noted in medicine and health (49%), telco (45%), and mass media (43%). The highest preference for out-stream video ads is given in games (97%), education and work (96%), and retail trade (92%).

The largest category, in terms of investments, turned out to be FMCG, having 26% of all investments in in-stream and 27% in out-stream video ads. Top 3 in-stream leaders are also medicine and health (11%) and beauty ware (10%). The second place in out-stream is taken by leisure and entertainment (17%) and the third one by e-commerce (7%). 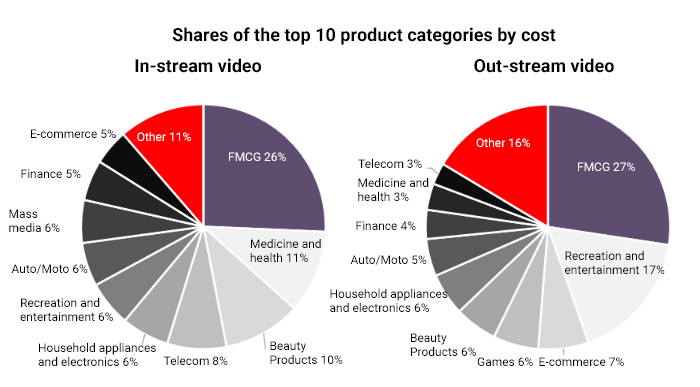 In 2019, video ads carry on gaining pace. If you do not promote your business via video yet, it is high time to start doing this, while our recommendations will help you get the most from your ads placement:

1. Record video of good quality. This is a trite rule but the majority forgets that users perceive video information much better than, for example, texts. What your video will be like will affect the impression of your brand and product that the audience will fall under.

2. Combine in-stream and out-stream. This is the only way how you will be able to get the maximum reach.

3. Experiment with video formats and ads placement technologies. This is the only way to place video ads with the maximum efficiency.

4. Cooperate with experts. RMAA experts will help you plan your budget and make a media placement plan that will let you win the Russian audience.

Do you want to know more about the Russian digital market? Download our White Paper Russian Digital Market Overview 2019 and learn how to attract Russian customers through online channels.