The Internet’s role in human life keeps on growing 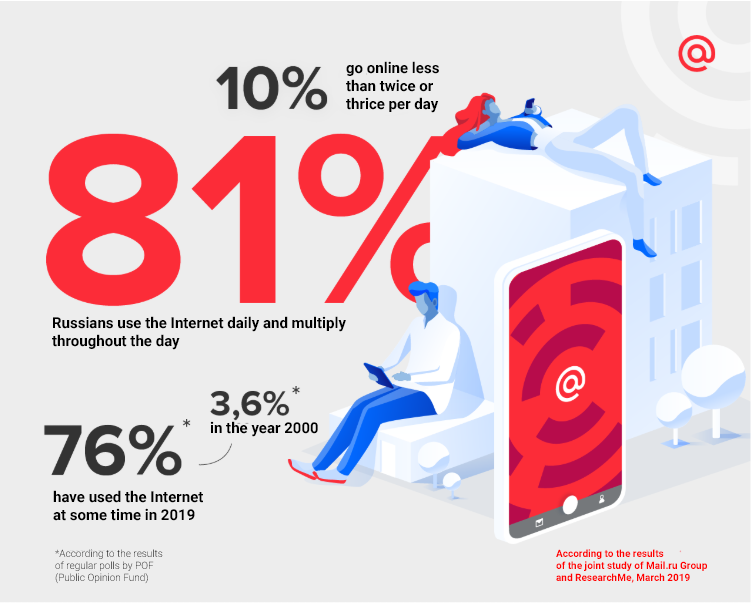 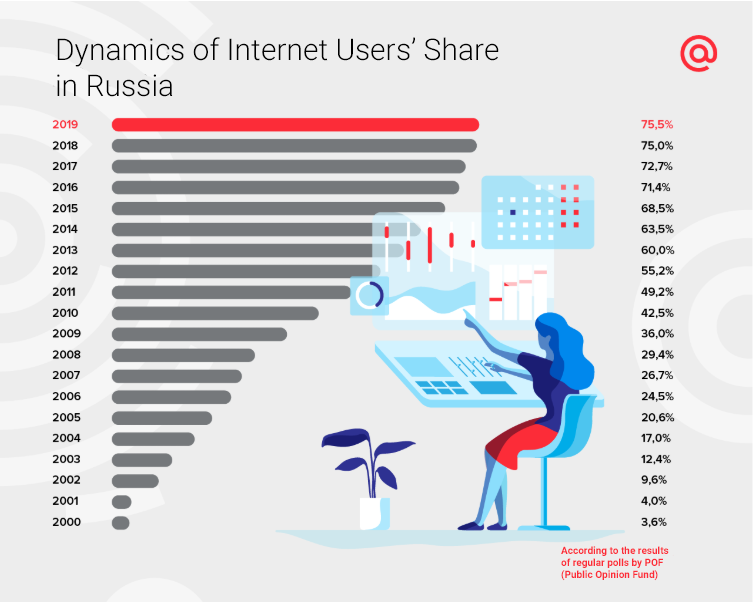 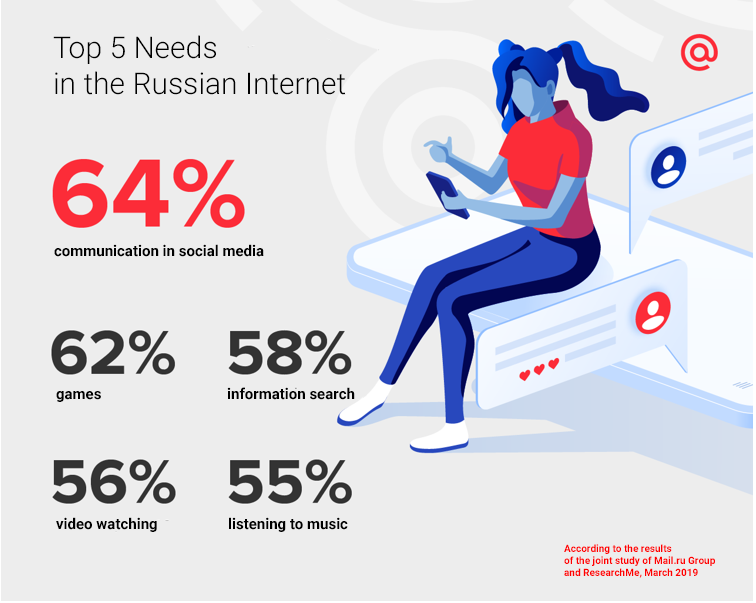 71% respondents have smartphones and mostly go online using them; 62% respondents also use laptops; every second one (52%) is a PC user; 37% noted that they use tablets, and almost one third of respondents (28%) have Smart TV. 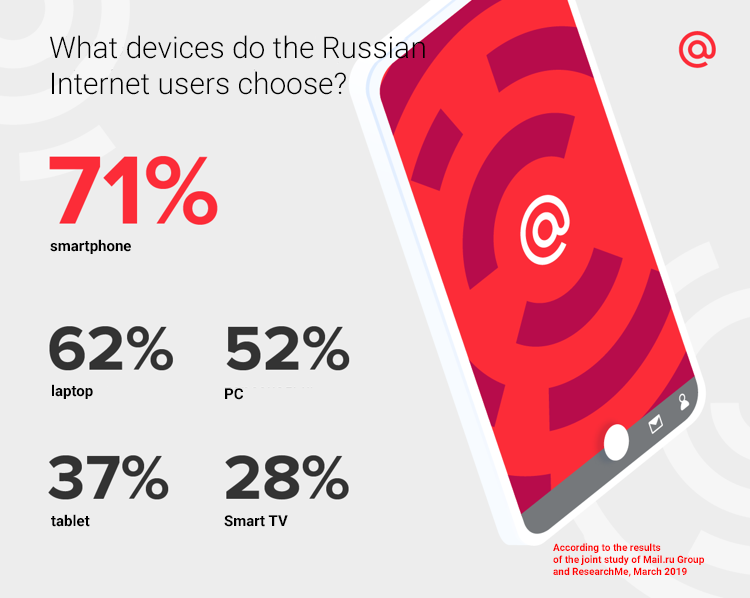 Key trend for the last years is mobile Internet growth

The activeness growth mostly happens thanks to women (71% vs. 61% men) and people under 45 years old. At that, users note that for going online they have lately started using laptops (44%) and PC (42%) more actively. One third of respondents (29%) started going online by means of their tablets more often.

The most widespread online activity became video watching—74% users noted that they had watched video online within the last year. Study results detected transformation of online consumption: people address the Internet more and more often to find convenient services that save them from routine and make their lives simpler. The second and third most popular activities became taxi requests (45%) and selling or buying goods through bulletin board services (43%). Nearly one third of respondents (30%) ordered meals online, and almost every fifth respondent (18%) visited online educational platforms. Two thirds (67%) believe that online education will become a main form of study in 25 years. 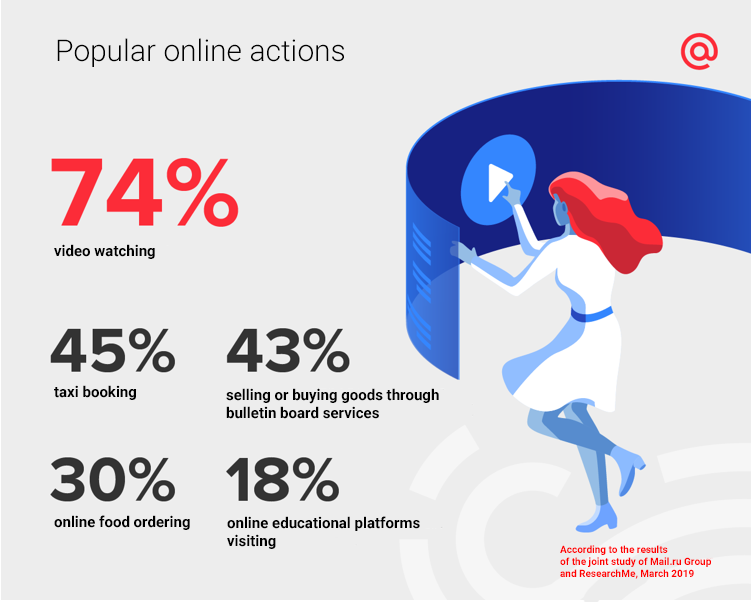 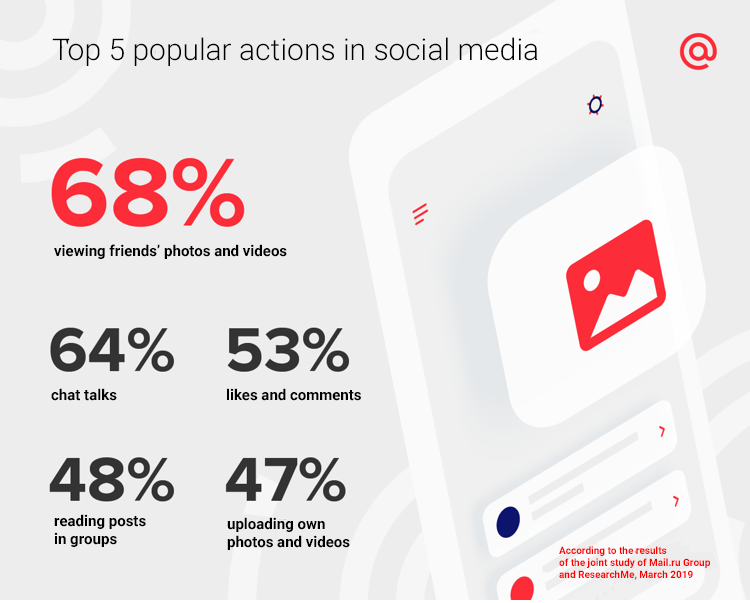 Users aged 14-24 years old cannot already imagine their day without listening to music (39% respondents tell that), while people aged 45+ actively use search services (45%). The findings disprove a stereotype that young audience spends more time playing video games. 58% respondents under 35 years old, as well as those who are more than 35 years old say that they spend three and more hours a day on games. 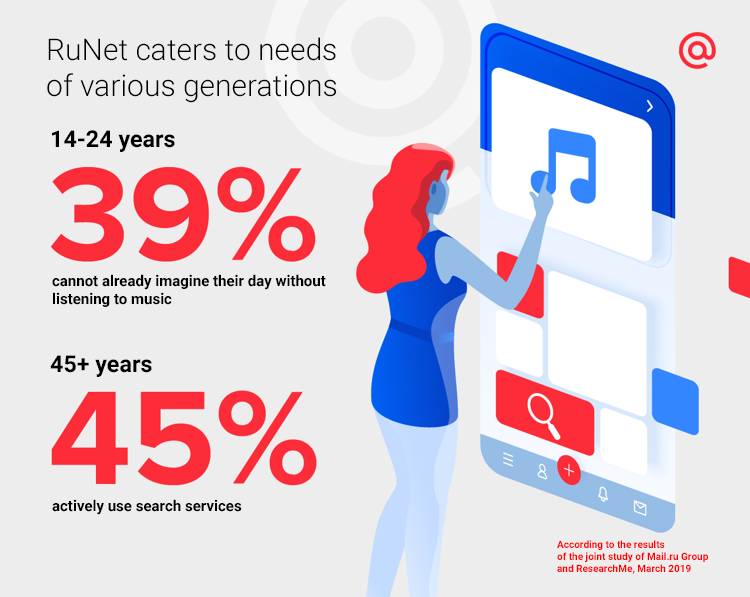 More than half of male respondents (58%) are sure that in 25 years the Internet will be helping people become happier (vs. 49% women). Men and women play games with equal activeness (63% and 62% respectively). Men are less Internet-addicted than women. 41% men and 53% women cannot imagine their day without social media. What is more, women have more strongly pronounced needs to search information, watch movies, and communicate in all ways online. Russian Internet: Past vs. Future

In order to recall what the RuNet was like in its infancy and how people used it, the experts addressed the audience of the Mail.Ru Group blog on Habr portal. According to the results of the poll in which 1,700 users of the Mail.Ru Group blog on Habr portal took part in, 66% respondents have been using the Internet for more than 16 years. Top 3 resources from which the RuNet began were Rambler (60%), Mail.ru (58%), and Yandex (49%). One third of respondents also mentioned such websites as Anekdot.ru (34%), Google (34%), Altavista.com (33%), Bash.org (33%), and Lib.ru (32%). 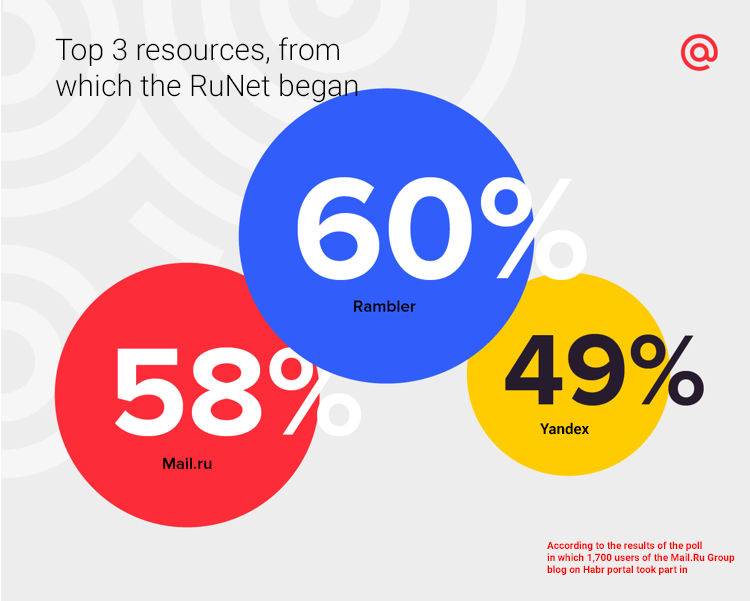 Future of the Russian Internet

Most respondents (79%) are sure that the Internet will give us even more opportunities for development; 78% consider that voice assistants will become indispensable, while 64% are sure that in future we will use VR glasses, headsets and other smart devices daily. Besides, 70% respondents are sure that in a quarter of a century many jobs will be replaced by artificial intelligence. 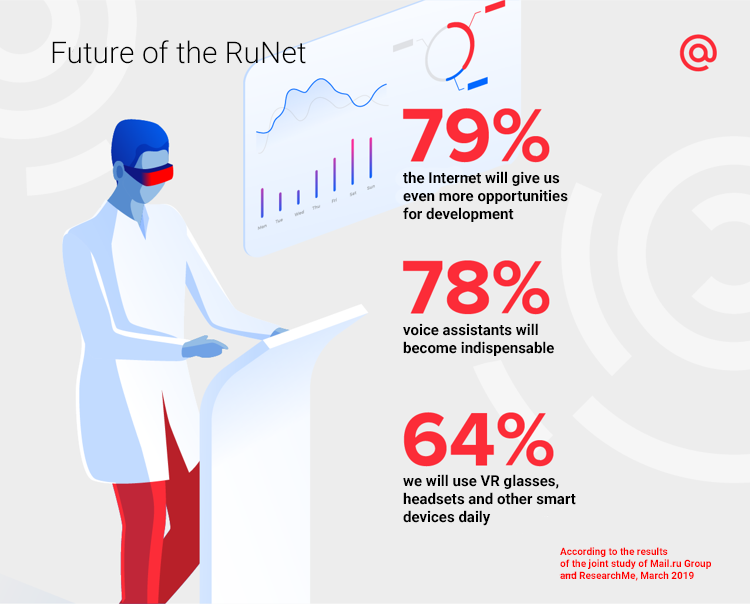 The poll was conducted in March 2019 jointly with ResearchMe, a partner of Mail.Ru Group in marketing studies. 9,600 Internet users in Russia took part in it from their desktop and mobile devices. The company also used the data of the Public Opinion Fund and the results of the poll of the audience from the Mail.Ru Group blog on Habr portal.