Popular queries of tourists give an insight into what destinations they prefer, what they are interested in with regards to one or another destination (hotels, food, guided tours etc.). That is why it is so important to keep an ear to the ground and follow online interests of users.

Based on web requests, Yandex experts decided to learn where Russians spend their holidays this summer, which countries and resorts have become fashionable in recent years and which ones, on the contrary, became less visited. For this, tourism queries were studies, i.e. ones, to which Yandex replied with links to popular tourism websites.

In order to find the most popular destinations of this holiday season, travel queries in June were studied: according to Yandex.Travels, in June people were looking for tickets for mid and late summer most often.

The most popular tourism in Russia is domestic: this year in June, more than half of all requests about travel destinations were devoted to vacations in Russia. The next popular option is to fly to Turkey. Top five main countries for travelling also got Italy, Greece, and Spain this year.

According to Yandex search, June 2019

Among foreign cities, the most marketable foreign resorts on the list are Turkish Kemer and Alanya.

Measuring by large regions, most often Russians who are going to go abroad look towards the Middle East and North Africa—these regions accumulate more than one third of queries about travel destinations, mostly thanks to Turkey. European countries are asked about a bit less. The third place is taken by countries of the near abroad. East and South Asia are interested in pretty as much as actively, or in every tenth query. Sub-Sahara Africa, America, and Australia, taken all together, accumulate a bit more than 5% queries about travel destinations. 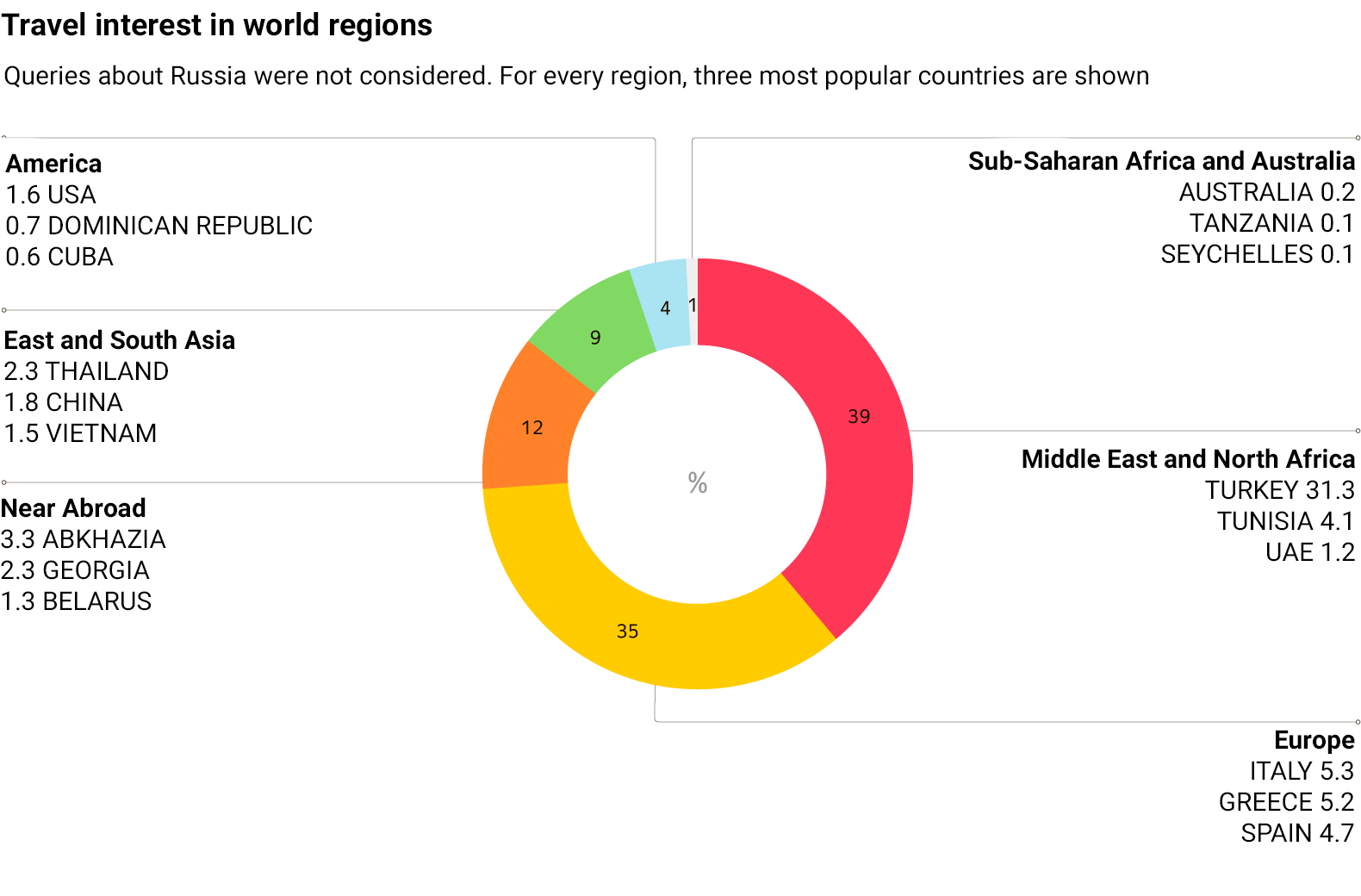 According to Yandex search, June 2019

Inhabitants of some cities are notable for heightened interest to one or another destination. For example, in Kazan the share of queries about travels to the Middle East and North Africa is 50% higher than in large cities on average. Natives of Omsk ask about travels to Kazakhstan four and a halt times more often than average, while natives of Krasnoyarsk are interested in Vietnam, China, and Thailand three and a half times more often than average.

Travelling in the Span of a Year

Within the year, the distribution of travel interests between countries may vary. The share of queries about the countries of West and Central Europe, for instance, about Austria and Germany, is much higher in winter than in summer among all travel queries. The same can be said about countries where in winter it is warm enough to swim—for instance, about Thailand, Egypt, and India. There are also such countries whose share of queries does not almost vary within the year, for instance, Russia, Portugal, and Morocco.

Top 10 countries that were most interesting for Russian tourists in Yandex this summer are as follows:

How tourism changed after the 2014 crisis

Because of the crisis in 2014, the share of queries about the majority of popular travel destinations decreased sharply. Many European countries, for example, Spain, Greece, Italy, Czech Republic, have not won back their positions in Yandex search yet. Others, including France and Germany, did it only this summer. The demand for travels to Southeast Asia has dropped against the background of crisis, too. Thailand suffered most: by 2017, the interest to it has almost been regained, but then it waned, probably, because of the growing interest to Vietnam and China.

The popularity of queries about vacations in the Middle East and North Africa has been much about the same against the background of the 2014 crisis, first and foremost, thanks to a stable demand for travels to Turkey and Egypt. The interest to the region turned sour roughly in 2016 after Russia enforced a ban on organization of charter flights to Turkey in autumn 2015 and entirely broke flight connection with Egypt.

Simultaneously with the general drop in interest to foreign travel, there was an increase in the share of queries about travels to the countries of the near abroad, for instance, to Belarus, Abkhazia, and especially to Georgia. After massive protests in Tbilisi in mid-June and news about the stoppage of direct flight connection between Russia and Georgia, the interest to the country dropped drastically, but in the end of the month the number of travel queries about Georgia began growing again—on the 30th of June, there were just little fewer of them than on the 1st. 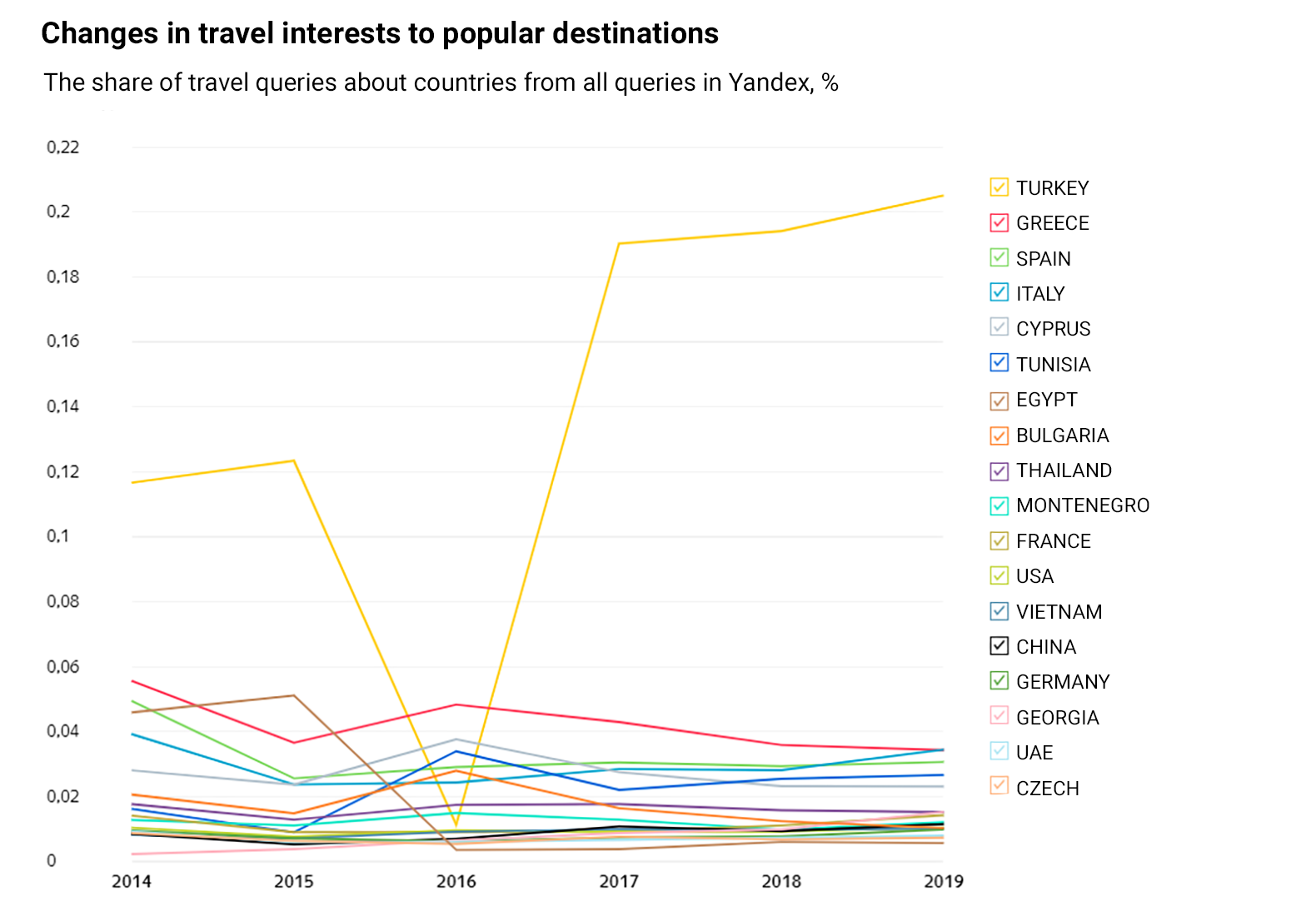 What Destinations Became Most Popular?

If we talk about the real statistics of outbound tourism, according to the interim results of the high summer season announced by Maya Lomidze, Executive Director of the Association of Tour Operators of Russia (ATOR), the most popular destinations in 2019 for Russian tourists became Turkey, Spain, Greece, Tunisia, Cyprus, Montenegro, Bulgaria, Thailand, and Vietnam. Basically, all destinations show an increase of 10% to 18%. For example, Italy and Spain were up nearly 15%.

If you want to learn more about the travel market environment in Russia, download our study Russian Tourism Market Report: Trends, Analysis & Statistics.