Russia plays a significant role in the global travel market. According to the research "Russian Tourism Market Report: Trends, Analysis and Statistics", in 2017 Russia moved up from rank 11 to rank 8 (+13%) and hit TOP 10 again.

Today we will talk about the results of the year 2018 for the Russian travel market.

Dynamics of the Russian Travel Market in 2018

In 2018, Russians’ travel growth rates (far abroad) dropped almost five times, compared to ones in 2017. According to the results of three quarters of 2018, the tourist outflow grew only by 7.34% (in 2017, the growth was +35.9%). Similar growth rates—nearly 7-8%—are also expected upon results of the whole year of 2018. At the end of the day, according to forecasts, there will be nearly 31 million of Russians’ trips far abroad recorded in 2018*, while the total outflow will grow in size to 44.7 million people.

*The Russian Federal State Statistics Service has not published any consolidated data as of 2018 yet, but, as soon as there is some news, we will immediately let you know the updated statistics. Subscribe to our blog!

Russians’ tourist outflow growth rates in 2018 dropped due to a natural deceleration after an explosive growth in 2017, a reduction of real disposable population incomes, and a severe weakening of the ruble’s exchange rate since spring 2018. World Cup 2018 joined these factors, too, having left a significant part of solvent people at home (in Russia) at the top of the season (a large number of people in big cities who were servicing the World Cup, from rescue workers to doctors).

Where Do Russians Prefer to Travel?

As the year of 2018 gone by showed, Russians ‘choose low-budget tours with a short flight, with a minimum of extra services and excursions, and with a price range of 50-60 thousand per person—this is an average price’, according to Maya Lomidze, Executive Director of the Association of Tour Operators of Russia (ATOR). 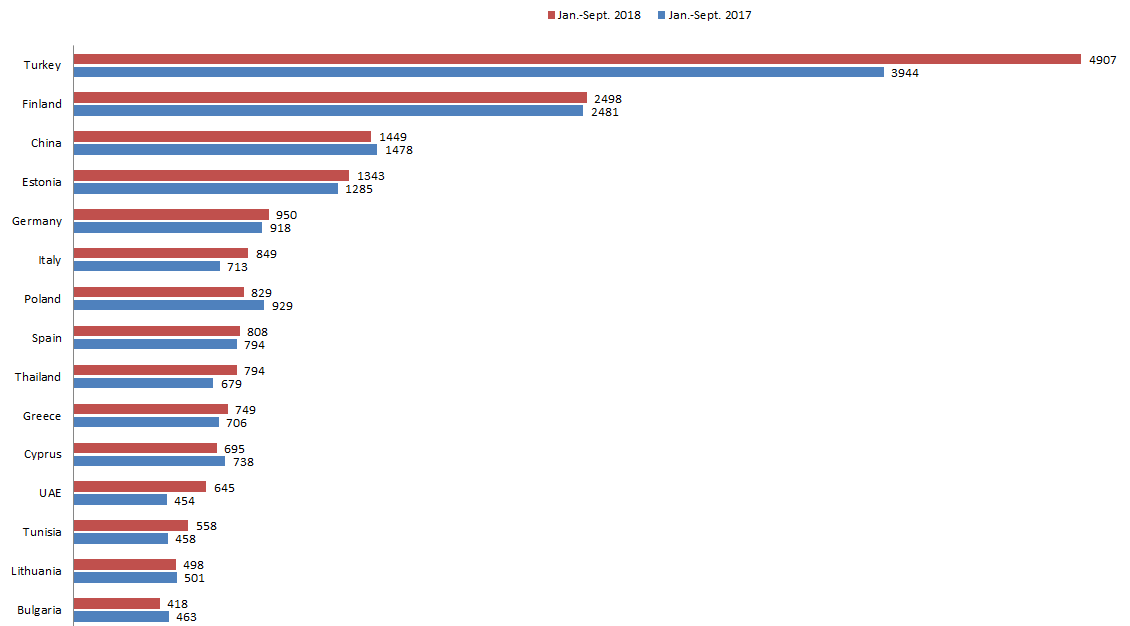 In 2018, the United Arab Emirates showed significant dynamics in the Russian travel industry market. The tourist flow thereto grew by 42% within nine months of 2018, compared to the same period in 2017.

Turkey still grabs a huge tourist flow share from Russia—as per experts’ estimates, almost 6 million Russians visited Turkey in 2018, while the growth made up +24%. In 2018, low prices of early booking were for the benefit of Turkey, a number of companies sold 40% to 50% of the total volume thanks to early booking.

Besides, Tunisia showed a significant growth in Q1-Q3 of 2018, compared to the same period in 2017. As ATOR notes, in 2019 Tunisia intends to develop its success in the Russian market. In March, Tunisia’ tourist office will take part in the MITT exhibition: René Trabelsi, their new Minister of Tourism and Handicrafts, will come to get to know tour operators. Besides, Tunisia is going to participate in regional tourism exhibitions to be closer to local tourism business. Support of leading tour operators’ events, a seasonal advertising campaign, info tours, workshops, and retail seminars are budgeted for 2019.

Among expensive premium Asian directions, Maldives show a growth of 20-25% in per year terms; Japan has shown a record growth in the number of Russian tourists—more than 20% in total as per year.

The drop in the tourist flow in per year terms is noted, following the results of three quarters, for such markets as the USA (-11%), Great Britain (-2%); there is also a slight decrease in the tourist flow to a number of Western European countries such as Norway, Belgium, the Netherlands, Switzerland, Sweden etc.

According to ATOR, taking into account all companies that went out of business in 2018, the total amount of tourist’s losses from bankruptcies of tour operator companies comprised more than 2.5 billion rubles (more than $36 million).

Because of this, more than 27 thousand tourists could not go on a planned trip.

The largest losses were incurred by tourists because of the exit of the tour operator Natalie Tours from the market. The total loss, in this case, comprised 1.8 billion rubles (more than $26 million).

However, bankruptcies did not disturb stability of the travel market: only small companies and one average-sized tour operator left it.

The loss scale is incomparable with the events of 2014: at that time, more than 73 thousand tourists suffered from only two tour operators (Neva and Labyrinth), while the loss comprised 3.2 billion rubles only in these cases (nearly $57 million at a rate as of the end of 2014).

2019 Trends and Tendencies in the Russian Travel Market