The major reason why Russians purchase real estate abroad is an opportunity to have a permanent holiday place in a warm climate country. Apart from that, Russian-speaking buyers are interested in commercial real estate. They consider housing purchase to be an asset that can be sold later.

Learn how to market international properties to Russian buyers – download the White Paper “Guide to Foreign Real Estate Promotion in the Russian Market”.

‘Often housing in Bulgaria, Greece, Montenegro, Cyprus, or even Egypt is cheaper than ours in Sochi or Anapa. Besides, warm season in southern Europe, on islands, and in Africa lasts practically all year round, unlike on the Black Sea coast of Krasnodar Krai. That is why people purchase such a distant summer house with a view to come there for a comfortable holiday at any season’, Oleg Repchenko, Director of the Real Estate Market Proxies Analytical Center, noted in an interview for Rossiyskaya Gazeta (RG).

Today, Bulgaria is the most popular country among Russians in terms of buying foreign real estate, confirm experts of the Financial University under the Government of the Russian Federation, who conducted a study of Russians’ readiness to purchase real estate abroad, upon request of RG.

As explained by the Vice Rector of the Financial University Alexey Zubets, apart from Bulgaria, Russians are interested in housing in Germany, Czech Republic, Turkey, Cyprus, and Montenegro. For instance, for the last two years the demand for real estate in Turkey has grown almost four times; in Bulgaria, 2.5 times; in Germany, Czech Republic, Cyprus, and Montenegro, almost twice.

However, the growth of demand for real estate in Spain turned out to be far below average (only 20 percent), although this country used to be of more interest for Russian real estate buyers. The demand for housing in France, Greece, Great Britain and many other European countries stayed equal to ones from two years ago or even reduced.

However, on the other hand, a demand for real estate in Armenia and Georgia livened noticeably. It is quite possible that both native Russians and comers from these states are ready to invest in purchase of real estate there for investment purpose, in reliance on economic revival in these countries, as well as for doing business, the University highlights.

83 percent of the total demand for real estate abroad accounts for houses and apartments. As Oleg Repchenko explains, the most popular format is a suite of rooms. For instance, a suite of rooms with an area of 100 sq. m. on the coast of the Black Sea in Bulgaria will cost nearly 100,000 euro or 8 million rubles. One square meter there costs nearly 1,200 euro. In contrast, one square meter in Sochi can reach up to $3,000-5,000.

In summer 2018 in Bulgaria, Russians chose suites of rooms at the seaside in gated communities with infrastructure—swimming pools, children’s playgrounds—most often. At that, serviced apartments were in demand—with a concierge, security, as well as with a service organizing apartment letting for gaining passive income. Intense interest of Russians in Bulgarian real estate, according to Moscow Sotheby's International Realty, is caused, first and foremost, by low budget, as well as lingual and cultural proximity. As a rule, such deals are made within €30,000-50,000.

In summer 2018 in Spain, Russians invested funds in retail. In Italy, their interest was paid to hotel real estate where investors reckon on 5% profit margins per annum. At that, such facilities are mostly purchased for redevelopment.

Russians show interest in Italian resort real estate on the coast of the Mediterranean sea, as well as near Lake Como and Lake Garda, adds Marina Shalaeva, Director of the Foreign Real Estate and Private Investment Department in Knight Frank.

In the USA, suites of rooms in skyscrapers of New York, as well as sea view apartments in Miami enjoy most popularity.

The most attractive country, from the investment point of view, is still Germany. Taking Brexit into consideration, it accumulates all investment demand, as Moscow Sotheby's International Realty believes.

Of special interest for Russians are mansions in Munich, apartment houses in Berlin, and castles in Bayern. ‘In Germany, Russian clients willingly buy a pool of apartments or a ready-made rental business’, clarifies Marina Shalaeva.

In Greece and Cyprus, a demand for villas by the sea remains stable. In Greece, suites of rooms in Athens are popular as well. In Cyprus, Russians invest in apartments in communities with infrastructure in Limassol and Paphos, as well as in new development investment projects with apartments and villas.

The demand for real estate of the insular republic is explained by action of the investment citizenship program. To become a citizen of Cyprus, it is enough for an investor to buy residential or commercial real estate costing €2 million and more.

‘Facilities of such value include suites of rooms in Limassol or resort Ayia Napa, a hotel or an office in Nicosia, a restaurant or a coffee house in Larnaca. Besides, many businesspeople obtain a Cyprian passport to become island residents and significantly save on taxes for their company. For instance, several clients of ours have recently moved their offices to this country’, tells Marina Shalaeva.

At that, real estate prices in Cyprus vary a lot, depending on the city and the facility type. In Limassol, the most popular city of the island, housing prices can reach up to €16,000-20,000 per 1 sq. m. This refers to facilities that are new for the city—residential towers with 5-star hotel infrastructure.

‘While in Montenegro the demand for real estate among Russian has dropped twice, in Cyprus within the period from 2015 until 2017, on the contrary, 50% demand growth is detected. At that, as for big budget housing starting from €2.5 million, the number of deals increases almost thrice; within the budget from €1 to €2.5 million, almost five times’, tells Irina Mosheva, Managing Director of Sotheby`s International Realty.

‘In resort markets, most often, people consider small villas or apartment nearby the sea. In cities such as Vienna, they are more likely to buy 2-3 bedroom apartments in the downtown within the limits from €500,000 to €2 million’, adds Yulia Ovchinnikova, Director of Foreign Real Estate Department in Savills, Russia.

In London, small apartments in the downtown are in Russian demand, for both rental and sale. ‘Most often our fellow nationals choose apartments in new buildings because their planning is more convenient. Besides, there is underground parking, a concierge, security, often a swimming pool or a gym. You can never find it in old communities of the British capital. Spending on such purchases is, as a rule, £1–3 million’, comments Yulia Ovchinnikova.

Larger purchases are made by Russians who come to the Great Britain for permanent residence. In such cases, buyers consider apartments with a bigger area or separate houses in the downtown of London. According to Moscow Sotheby's International Realty, in summer 2018 contrary dynamics began to show in the Great Britain: many owners either listed their luxury facilities for sale or declared their intentions and are waiting for proper economic conditions.

Russians invest their funds in income-generating properties of Albion more and more often. For example, they purchase student dormitories, nursing homes, or parking lots (as a rule, in cities like Manchester). As told by Irina Mosheva, such real estate shows no less than 7-8% profit margins per annum.

Commercial real estate abroad is of higher interest for Russians than housing. The latter is mostly purchased for own occupancy. However, even in this case it is important for buyers when real estate can earn, tells Irina Mosheva. Clients look at housing as an asset than can later be sold, ideally quickly and without price losses. Another important condition is that residential buildings must generate passive income from letting. Such capacity is considered by Russians as early as at the buying stage.

This is also proved by results of an annual poll by Tranio: the vast majority of Russians purchase apartments and houses abroad for their letting. This option is chosen, as a rule, by 60-80% respondents. ‘We conduct a poll among our partners concerning Russian investors abroad. This year, 476 real estate marketers from 33 countries have taken part in it’, Tranio told. The study of 2018 considered commercial real estate, which leaders became bed-and-breakfasts and rental houses that got 33% and 31% votes respectively. 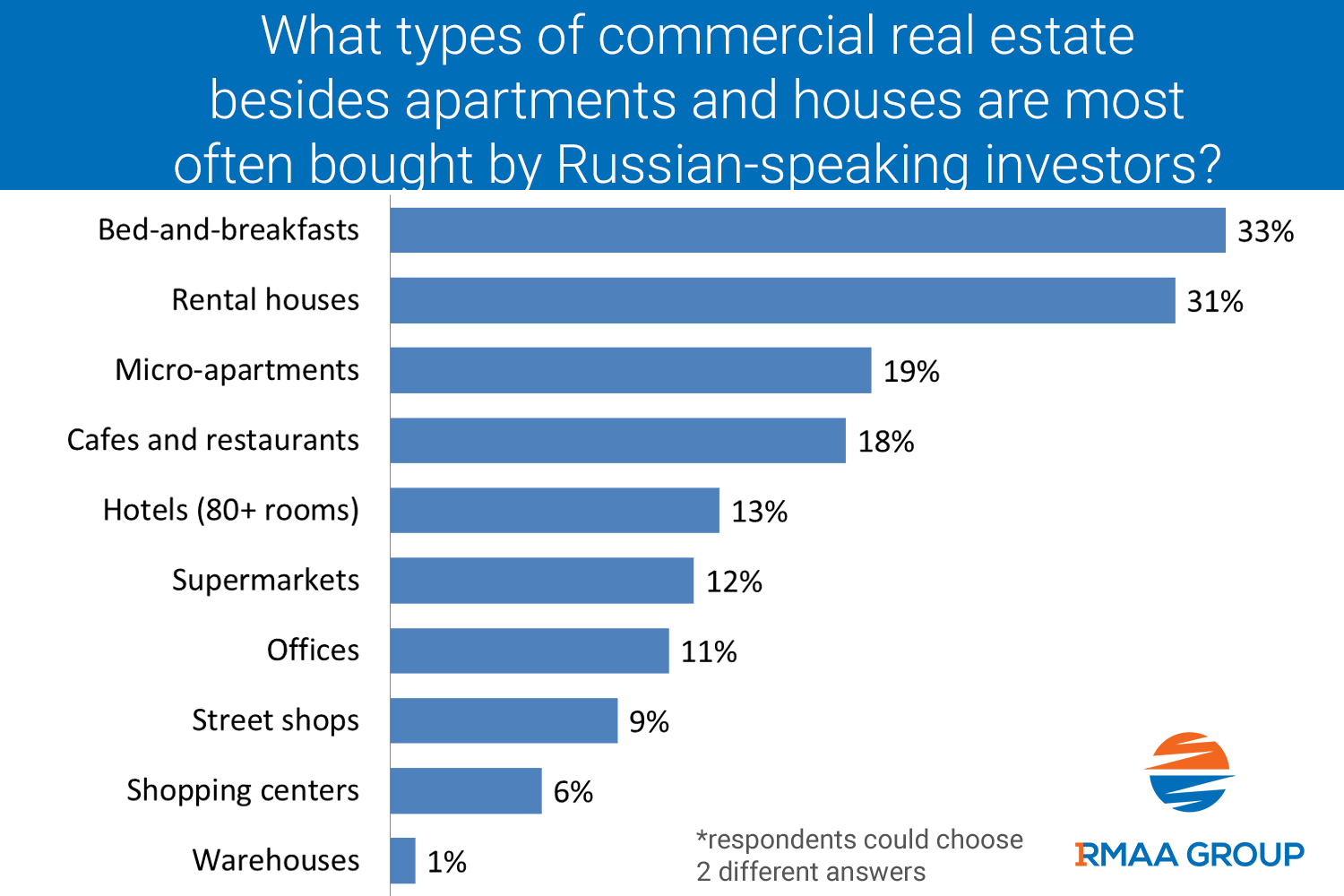 ‘Russians are more attracted by investments, which substantial part is within the price range up to €3 million. Predominantly, these are inns, residential realty for further letting, small cafés and restaurants’, explains Ekaterina Phonareva, Director of Real Estate Department in Colliers International.

As explained by the expert, Russian-speaking clients became more rational. ‘Just some five-ten years it was almost always an impulse purchase. Now we calculate some financial models almost for every facility. This is so common’, adds Irina Mosheva. Besides, the time for decision making became shorter. It is enough for a client to spend two or three days to choose two or three most suitable properties out of ten offered ones.

If you decided to promote real estate in the Russian market, but do not know how to sidestep your rivals, RMAA Group experts will elaborate a marketing strategy for you, which will make you stand out in the market and attract the maximum number of only interested buyers from Russia.

Guide to Foreign Real Estate Promotion in the Russian Market

Learn how to market international properties to Russian buyers 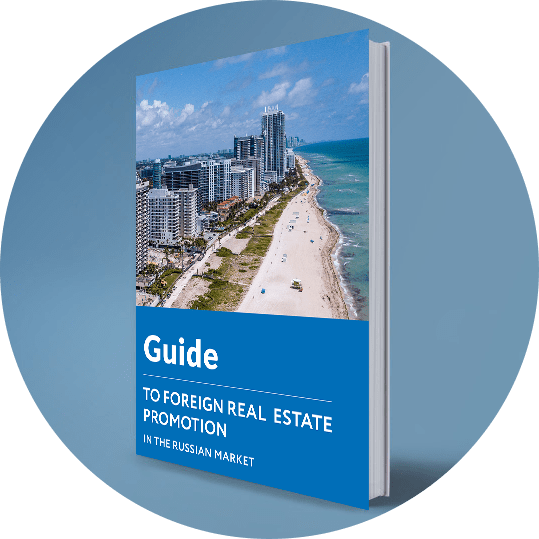