For the pharmaceutical industry, the COVID-19 year became sort of a challenge and a test of strength. Sale uplift due to the roaring demand for medicines, rise of the national segment, increase in the value and speed of adoption of legislative proposals—all of this had a significant impact both on the overall market dynamics and on its conditions. Moreover, all of it was going on in a changing environment, to which we all had to get used.

One of the most important legislative proposals of the government became introduction of a fast track (a procedure for accelerated approval of medicines and medical products in the event of an emergency). This provided domestic manufacturers with an opportunity to promptly get approved and introduce two medicines intended to treat the coronavirus disease, Favipiravir and Levilimab.

The accelerated approval also opened the way to the introduction of local vaccines against COVID-19 and to the beginning of a mass vaccination as early as in January 2021.

The pharmaceutical market value in Russia in 2020 exceeded 2,040 billion rubles, which is 9.8% more than in 2019. In terms of dollars and euro, there was stagnation in 2020. The March ruble depreciation resulted in a situation where the market capacity did not really grow when translated. So, in dollar terms, the market value in 2020 amounted to 29 billion dollars, which is just 0.2% more than a year before. In euro, driven by a higher increase in the exchange rate (11%), market dynamics is even negative (-1.6%).

Sales of medicines in kind dropped by 4%, equal to 6.17 billion package items. 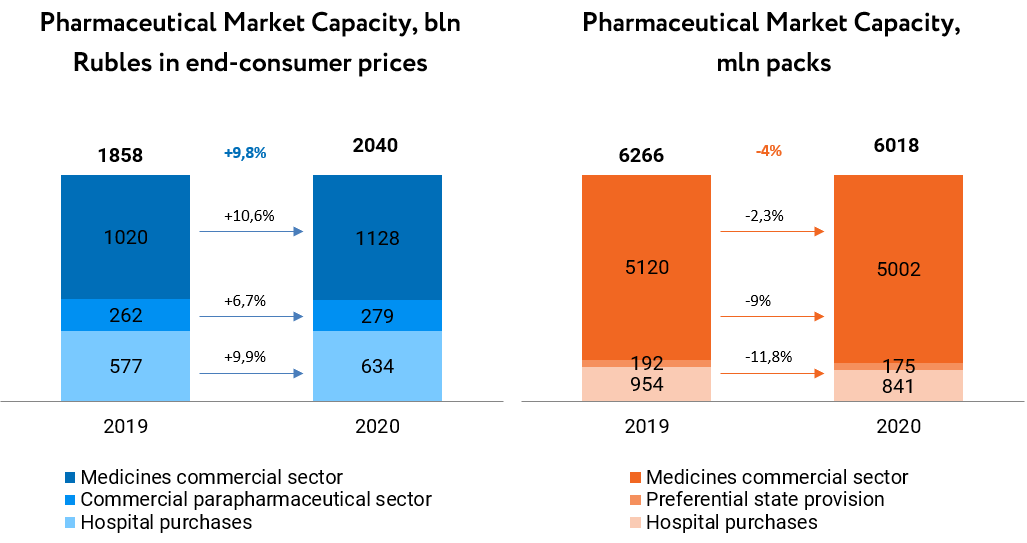 Dynamics in the commercial segment of medicines in 2020 was hard to forecast: all trends that had been forming over extended periods collapsed. The sales gain noted in March 2020 turned out to be one of the most substantial ones over the past number of years. Such panic buying was caused by the beginning of the coronavirus disease spread and an exacerbating economic crisis. Russians began buying up medicines left and right, waiting for a price rise in the midst of an exchange rate leap and for a shortage of necessary drugs because of restrictive measures. Naturally, after this advance buying the sales dynamics was weak and even turned negative during some months. Only in December the market got back to growth rates that were in January and February (before the coronacrisis). The growth driver, starting from April, was 'anti-COVID drugs'. Their composition could vary, but due to a considerable demand for them the market demonstrated overall positive dynamics in rubles (+10.6%) and only dropped by 2.3% in package items.

The total share of imported medicines in the market totaled 56.3% in rubles and 31.4% in package items at year-end 2020. The market growth in kind was negative both for drugs produced in Russia (-4%) and for foreign-made medicines (-3%). In ruble equivalent, locally made medicines increased by 13% and imported ones by 8%.

In 2020, the leadership on the drug sales top list by volume as per ATC (Anatomical Therapeutic Chemical) groups was taken over by Group A: Alimentary tract and metabolism (15.09%). The second place is taken by Group N: Nervous system, with the market share of 14.34% by volume. Top three is closed by Group R: Respiratory system (12.86%).

Influence of COVID-19 on Retail Demand for Medicines

However, the spread of a new coronavirus disease markedly altered the whole market environment. Any new information about drugs that were included into a list for coronavirus treatment or prevention led to a feverish demand for them and their disappearance from drugstores. For example, at the start of the pandemic it was an antimalaria drug with an INN of hydroxychloroquine that was believed to be promising in combating the coronavirus. As a result, average monthly sales grew almost twice in April-December as compared to the pre-COVID sales level (nearly 35-40K package items per month vs. 20K in 2019).

In 2020, there were neither seasonal patterns nor specific regularities that are common to the pharma retail market. Antiviral drugs and antibiotics became leaders of customer demand during the pandemic. What is more, even in summer sales in these categories were notably higher than in previous years.

At year-end 2020, the retail sale market gain equaled to 11%, while turning negative in package items (-2%). Therefore, nearly 5 billion package items of medicines totaling to 1,128 billion rubles (in retail prices) were sold on the retail side.

The growth of the locally made medicines' share is an already long-held trend for the pharmaceutical market. Since 2012, this rate has grown from 36% to 44%. In package items, the dynamics is less evident: for 8 years, the share has only increased by 1.6%.

In spite of the fact that the number of Russian and foreign manufacturers in the market is generally almost the same (nearly 540 and 560 companies respectively), there are more foreign medicine brands presented in drugstores (around 3,368, which makes 9,053 SKU). This figure for domestic drugs is 36% less, equal to 2,480 brands (8,615 SKU). Therefore, it is apparent that foreign manufacturers sell more 'unique' units—original medicines and branded generics. Russian medicines are issued in bulk in form of non-branded generics by several companies simultaneously.

Top 10 Medicine Manufacturers by Total Worth in 2020

The leader in the pharmacy segment at year-end, already as ever, is Bayer (4.6% in rubles), which pharma sales have increased by 18.1%. The German corporation's portfolio includes 68 brands sold in drugstores. The first place by sales volume gain (out of Top 10 Bayer portfolio brands) is taken by an antacid Rennie (+40.7% as compared to the 2019 sales level).

The second place is taken by the Novartis corporation with a 4.2% share. A number of the company's leading medicines was characterized by a notable sales increase—Broncho-munal (+156.8 as compared to the 2019 sales level), ACC (+54.3%), Amoksiklav (+35.7%).

The Russian manufacturer OTCPharm (+4 position) moved up to the third ranking position, having fallen to the leader with just a 0.6% share difference in rubles. The company's sales in 2020 increased by 37.1% as compared to the previous year. Russian drugstores sell 37 brands of the company. Out of them, a remarkable growth of demand was recorded for antivirals Arbidol (+353.9%) and Amixin (+104.7%).

In April, the State Duma enacted a law on distance selling of medicines. In 2020, the rules covered over-the-counter medication, but in the event of an emergency and a disease distribution threat, which is dangerous to people, the government is entitled to temporarily permit online sales of particular Rx drugs, too.

Despite of appearance of a 'new' sales channel—online—its main participants are still pharmacy chains. That is why the volume that is currently accounted for by online trade almost entirely remains in pharmacy retail. The volume of pharmacy eCom in 2020 equaled to nearly 93.2 billion rubles (medicines and parapharmaceuticals jointly), which corresponds to 6.6% of the pharma market capacity). At the turn of the year, in January, it was already at a rate of 8.2%. However, if market sales dynamics in general is about 10%, the turnover that accrued to online has increased by 62% as compared to 2019.

Pharmaceutical brands traditionally give their preference to TV ads, but in the new reality, online ads showed good progress: in the first half of 2020, the medication online advertising market increased by 43%.