Within a year, the investments into online ads increased by 20%, equal to 244 billion rubles—this is almost one half of all advertising budgets in the country. Out of home stayed at the level of the last year (43.8 billion rubles). TV budgets dropped by 6%, press by 16%, and radio by 5%. 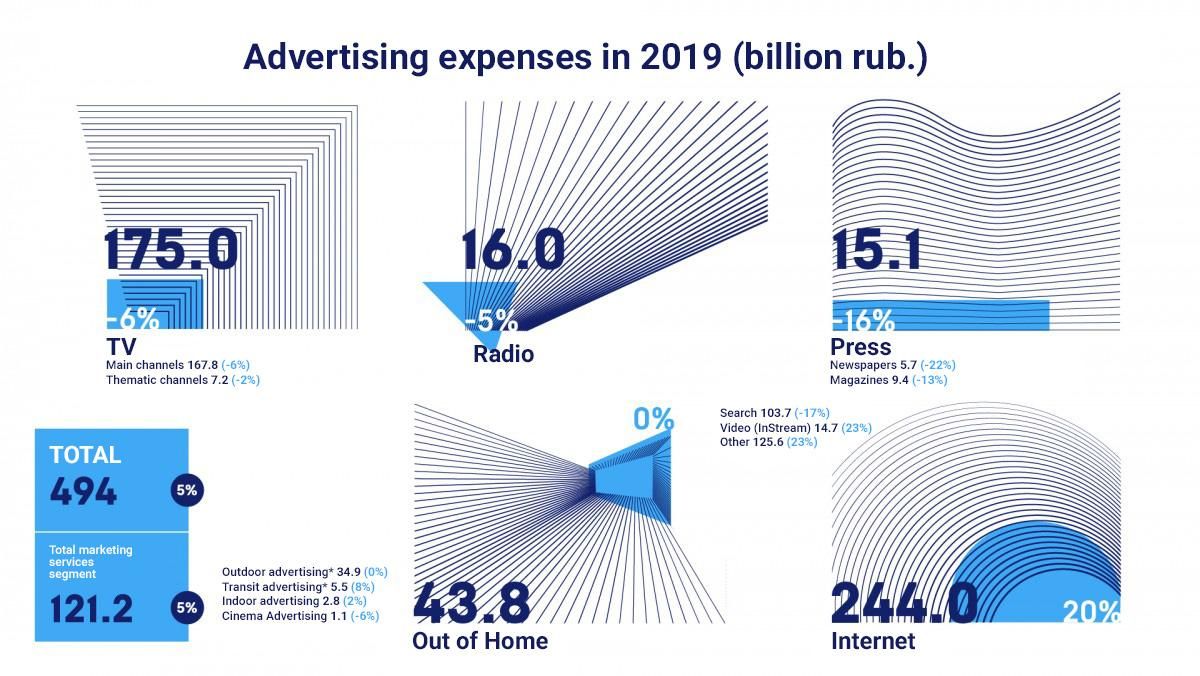 The most prominent dynamics, with the volume being still moderate, was demonstrated by digital audio ads (increase by 83%).

Earnings of TV channels, a major platform that manufacturers use to promote FMCG, dropped by 6% in 2019, down to 175 billion rubles. At that, just a year before, in 2018, this channel demonstrated a 9% growth.

As Mikhail Raibman, Deputy Business Development Director in Mediascope, noted, ‘The largest advertising category on TV is still drugs and dietary supplements, getting a quarter of the ad inventory on TV. Top 3 also includes retail and food.’

However, TV is still a mass medium with the largest coverage in Russia, as Mediascope notes. In 2019, 98% inhabitants of large Russian cities aged 4+ turned on TV at least once a month. 66% of the population did it daily. The coverage values have not changed much within the last three years.

In 2019, the income of Russian radio stations from ads dropped by 5%.

In general, the decrease is higher in regional markets than in the Moscow segment. The share of the regional segment is 53%, noted Alexey Zyatitskiy, Co-Chair of the Committee of Online Mass Media Selling Agencies in ACAR.

According to Mediascope, 87% Russians aged 12+ (107 million people) listen to radio at least once a month, and 57% residents (70 million people) turn on radio every day. Radio is still one of the most covering media in Russia, and this is the only medium that reaches all age groups equally, from teenagers to retirees. At that, Russians listen to radio during all activities in the course of the day.

The printed press feels worst: publishers lost another 16% income from ads within the year. Experts explained that by a decrease of readership circulation, a reduction in numbers of sales points, and a rise in paper prices. However, there is an important trend in this segment as part of advertising budgets of large publishing houses goes to digital.

As Pavel Miroshnikov, General Director of the Audit Bureau of Circulation or ABC, noted, ‘in spite of a thin time that they have, the press and publishers in Russia generally try to hold their own in the advertising market. First of all, the press remains a communication channel that has a high level of credibility as it warrants longevity and high quality of contact (readers are ready to make special time for reading, during which they focus on it and do not get distracted by other activities). It preserves an image of magnitude (every event becomes more significant for people when covered by the press). It remains the only media channel that enables to involve all five senses—vision, smell, hearing, touch, taste—by an advertising message, guarantees ad placement in a safe editorial environment and compliance with all advertiser’s requirements and current law. Finally, thanks to integration of all platforms and creation of multimedia projects publishers have an opportunity to widen the coverage by engaging a new audience today.’

Internet continues to be the most emerging segment: the volume of online ad market increased by 20%, equal to 244 billion rubles.

Read more about the results of the Russian digital market development in 2019 here.

What is in store for the Russian advertising market in 2020

Russian offices of international advertising groups reconsider a forecast of the Russian market development made before an economic downfall in the market. The decline on the Russian advertising market because of the ruble depreciation may be 4-8% in 2020 in the worst-case scenario, Dentsu Aegis Network does not rule out as reported by RBK.

Besides, the virus causing COVID-19 that has spread all over the world will have a negative impact on advertising in Russia, at least, in the short run.