Marketing of Eastern and Western European Tourist Destinations in Russia

As a reminder, Top 20 countries of the far abroad, except for bordering countries, where most Russians went in 2018, look like this. 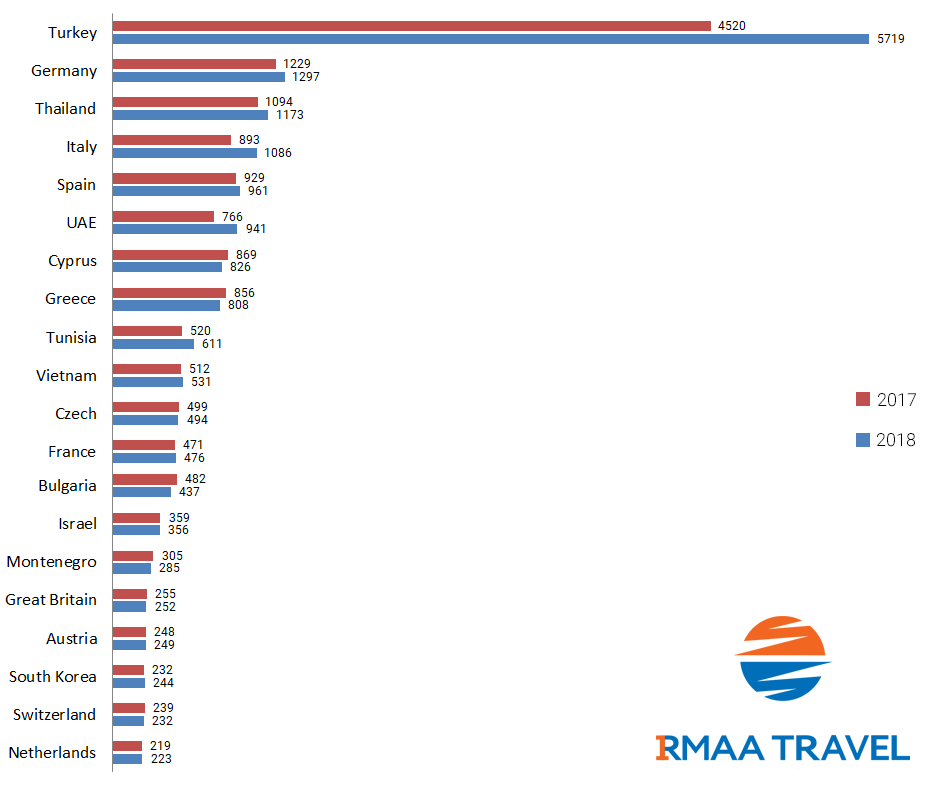 According to the statistics, five leaders in outbound tourism among countries of Eastern and Western Europe (except for bordering countries) are as follows:

Today we will look at examples of how these countries promote themselves in the Russian web space.

In the Russian public perception, Germany is associated with high-quality machines, punctuality of locals, and excellent national cuisine. Although travelling to this country from Russia has never been mass-market, it has good prospects, and the results of the latest years show it.

Some of the most popular German cities amount Russian tourists are Berlin, Munich, Dusseldorf, and Leipzig—there are direct flights there by Russian or German airlines.

Berlin magnetizes tourists, including youth, being the capital of Germany, the city of arts, creativity, and fashion. At the same time, it is Bavaria with Munich as its capital that is the most often visited state of Germany (by Russians) and the most powerful region of the country in terms of economy. Bavaria has a prolific sunny climate and a lot of architectural tourist attractions. Dusseldorf is in demand by business travelers; besides, this is a fashionable capital of Germany. There are a plenty of showrooms and boutiques there, and it is safe to say that Dusseldorf is one large mall where beautiful and original clothes are in abundance.

Germany is a universal destination, ready to offer absolutely any types of tourism: excursion, family, medical, inclusive, business, as well as culinary tourism.

Let’s see what online channels are used by the German National Tourist Board in Russia and CIS for promotion.

We inform about up-to-date offers, events, and news on the Tourist Region of Germany. Emails can contain travel offers from our partners with links to third-party sites that may use tools for conversion tracking.

Attractive travel destinations of the Czech Republic are presented in the Russian market within the terms of a marketing campaign “The Czech Republic — Land of Stories”, which aim is to spark the interest in potential tourists by means of engaging stories, which travelers can open and live through first-hand. 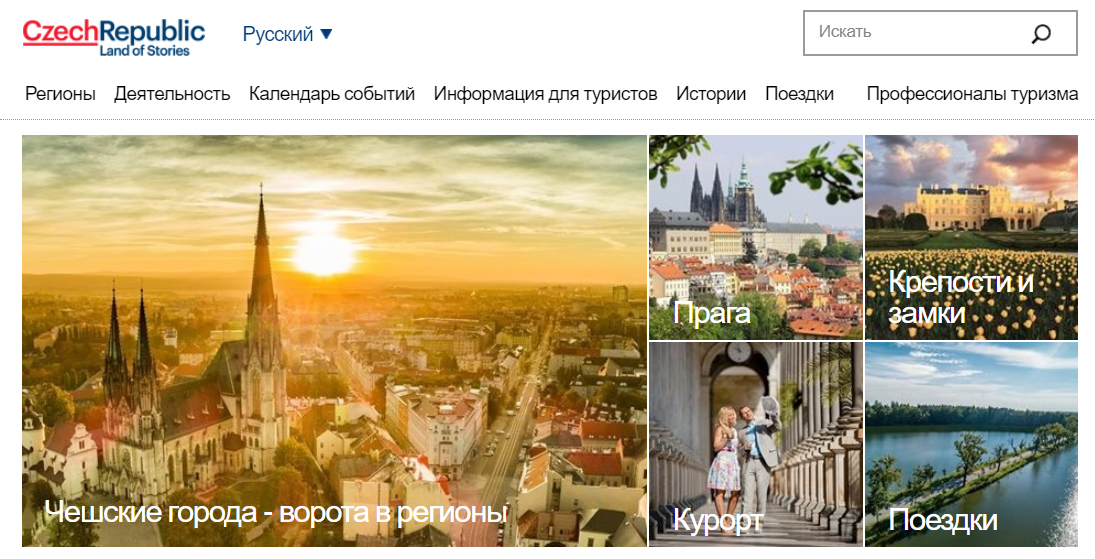 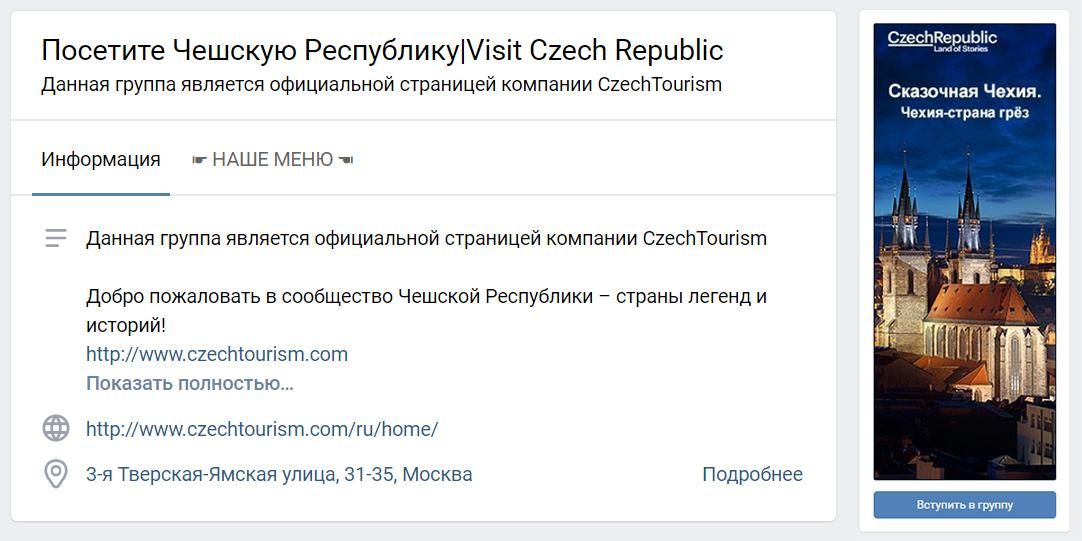 For most Russian tourists, France is associated with the most romantic place on earth.

Among reasons that chiefly beckon tourists to this wonderful country, the first thing to note is the Eiffel Tower that is the capital’s showpiece day and night, when the whole tower is brightly illuminated. If you do not have a picture with the Eiffel Tower on the background, then the trip is kind of a faliure, since it is the landmark of France.

The capital of France is also famous for its numerous cultural and architectural sites. As for those that are must-see, it can be Notre-Dame de Paris, which beauty and majesty just takes your breath away.

France is replete with diverse resort zones for both active and passive relaxation. In the former case, it is worth paying attention to Courchevel, one of the most well-known ski resorts in the world; in the latter one, to Saint-Tropez, a no less popular resort on the coast. Besides, the Corsica Island is worth attention, too, being a motherland of Napoleon himself, where there is still his home. It is simply a paradise for history lovers. 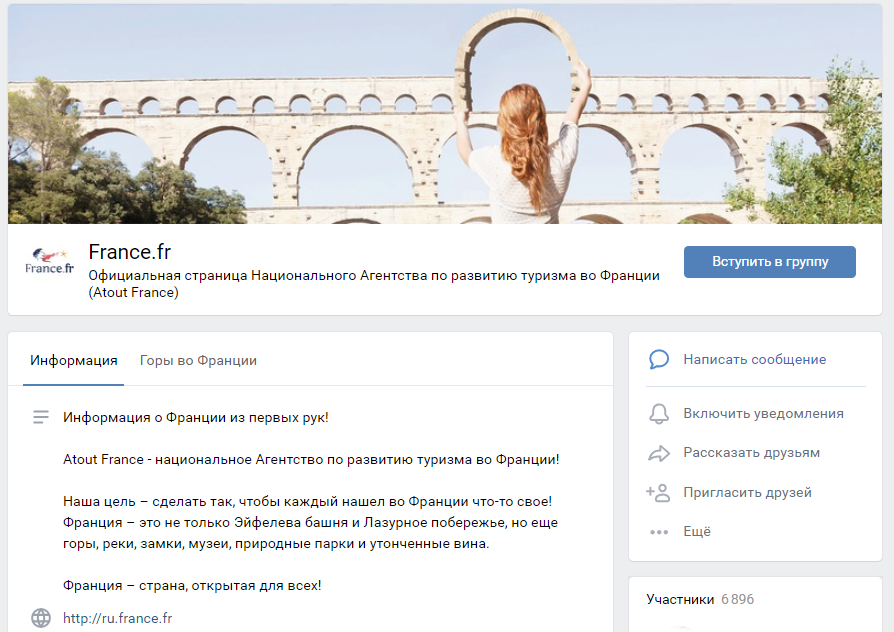 Atout France actively maintains a channel on Youtube. Unfortunately, there is no separate playlist for the Russian-speaking audience, but all channel videos are handily distributed into categories: regions, landmarks, and themes, for example, cuisine. And this is a promo clip about France as a touristic destination on their channel:

Rich cultural heritage, scenic landscapes, flamboyant and hearty people are all these things that act as a magnet for travelers.

Bulgaria attracts Russian tourists, first of all, by its ski resorts. Of course, they do not beat Austrian or French pistes, but will still strike a chord with our Russian mountain lovers, especially thanks to the pricing.

A great attraction for tourists is the eastern coast of the Black Sea in a warm summertime. At that time, tour operators offer not only options for beach holidays in comfortable hotels, but also extreme and diving tours. Besides, Bulgaria attracts tourists by wide opportunities for balneal and spa recreation.

In early March, Russian and Bulgarian representatives signed a Program for Joint Actions for Tourism for 2019-2021, aimed at increase of a mutual tourist flow of both countries. Now let’s see in what Internet channels Bulgaria is officially presented as a travel destination.

Great Britain can hardly be called a resort country, but, anyway, people come there from all over the world to enjoy the charm of the Albion, equally different from hot seaside resorts and European mountain ski regions with their near Alpine chalets. Those who like a mild, temperate climate will quite enjoy the coast of Great Britain—it is no coincidence that there are so many health resorts there.

The United Kingdom is a country of the acting monarchy with the richest history and culture: cathedrals, palaces, parks, museums, pubs, solemn ceremonials, musicals, opera performances, and street performers. 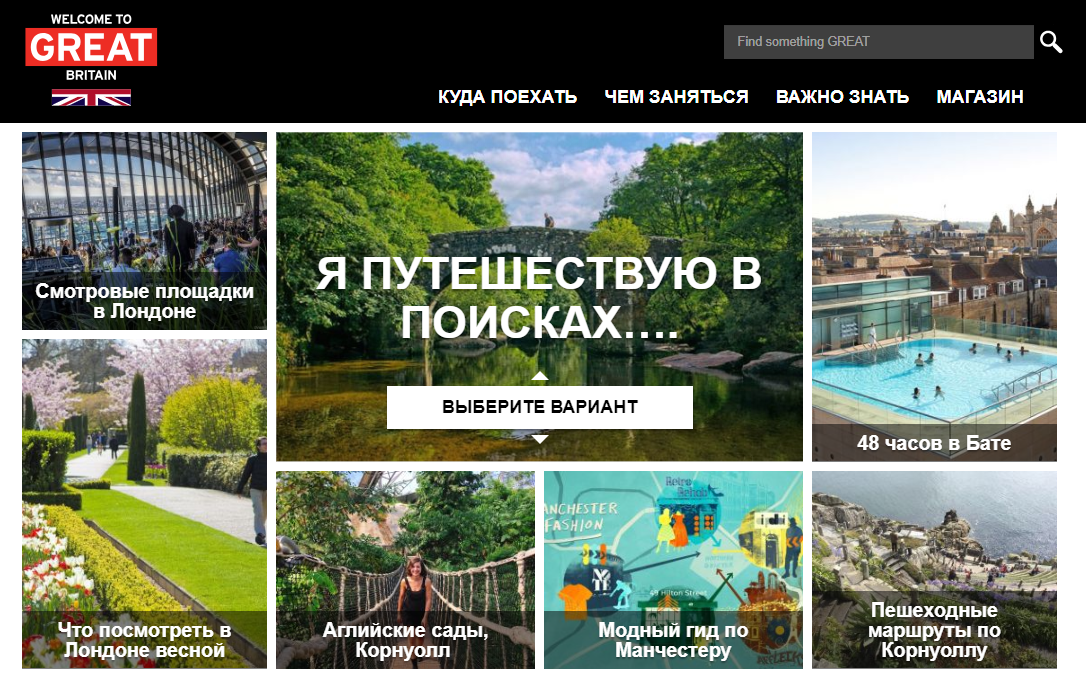 360° videos on the Youtube channel helps to get to know more about the country’s cities and attractions and awakes a desire to walk along the streets of London live.

We looked through the examples of how the European countries that are most popular among Russian tourists promote their travel destination online.

If you decided to promote your travel destination in the Russian market or to enhance your marketing strategy to win hearts of Russian tourists, you need to do the following:

1. Study our paper “Russian Tourism Market Report: Trends, Analysis & Statistics”, which will help you learn more about the environment and specificity of the Russian market.

2. Contact experts from RMAA Travel who will help you create and implement a marketing strategy to promote your travel destination in the Russian market.