Lead: September 30, photo-sharing service Instagram has launched an official advertising service in Russia. Many companies have been looking forward to this option, but their expectations have not been met. What caused that? What are the pros and cons of the new service? How not to lose but to win the audience of the Russian Instagram by means of official advertising? Read in the material of RMAA GROUP.

Advertising on Instagram on the world market appeared two years ago, the most famous American designer - Michael Kors - was the first who tested it. The picture presented watches of gold, in the far background there are popular macaroons, the color of the picture is warm and pleasant. Instagram users put "delicious", stylish and unobtrusive advertising 100,000 likes. Following the designer, all the major companies from different professional fields has begun to use the official service and it has paid off: ads took root and brought additional sales. 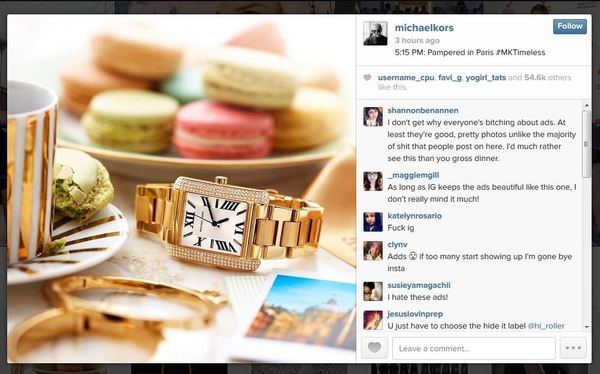 Among 400 million of Instagram users 16 million accounts for the Russian Instagram, our country ranks 5th in the number of users of this social network. According to the company's statement, the number of users in the country is growing by more than 25 percent every year.

Less than two months ago, large Russian companies rejoiced: on September 30, Russia was given the start of the official advertising on Instagram - service that significantly expands the possibilities for business promotion on the platform of fashionable and popular social network and makes it possible to reach all 16 million of users. 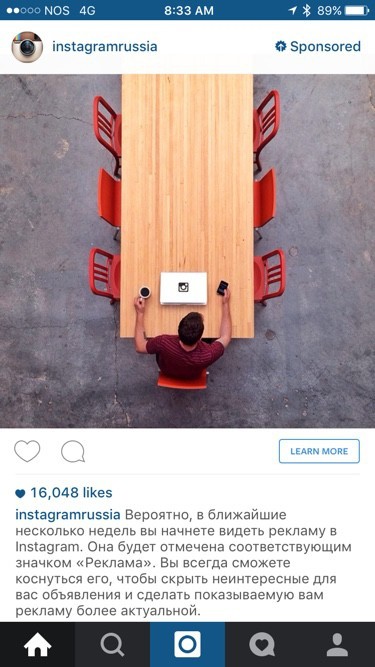 Probably you will see the ads on Instagram in the coming weeks. It will be marked with “Promoted” sign. You will always be able to click it to hide the ads you are not interested in and make displayed ads actual for you.

The option has many cons:

+ By means of targeting shows ads the right audience only,

+ Gives you the opportunity to publish a video up to 30 seconds (15 seconds for standard users),

+ Gives you the opportunity to use a new form of advertising - Carousel (slideshow of a few pictures),

+ You can pay only for real clicks or views of advertising,

+ You can view detailed stats, which allows you to track effectiveness of ads,

+ There is not minimal budget that allows even the smallest companies to use the service,

+ You can view detailed stats, which allows you to track effectiveness of ads,

+ There is a good selection of clickable calls to action: view full ads if the user is interested, go to the site or download an application.

Earlier different sources informed that IMHO VI would deal with advertising on the popular social network, however, there is no such service on company`s website. You can also meet on the Internet some alike offers from different resources, but experts’ advice is to work with the official representative, as the new product under the massive demand often attracts fraudsters.

The first problems with advertising on Instagram of the Russian companies have started both because of misunderstanding of how the service works and not a perfect work of the service itself. We won`t talk about the elementary lack of knowledge of users on how to create a public page on Facebook, all the little problems go away with time, we will take a noticeable example.

Such giant as Sberbank has ended in a fiasco: it did not achieve the goals, taking on a large flow of negative comments from dissatisfied Instagram users. Elena Piskareva, coacher for business promotion on Instagram, comments on why it happened: 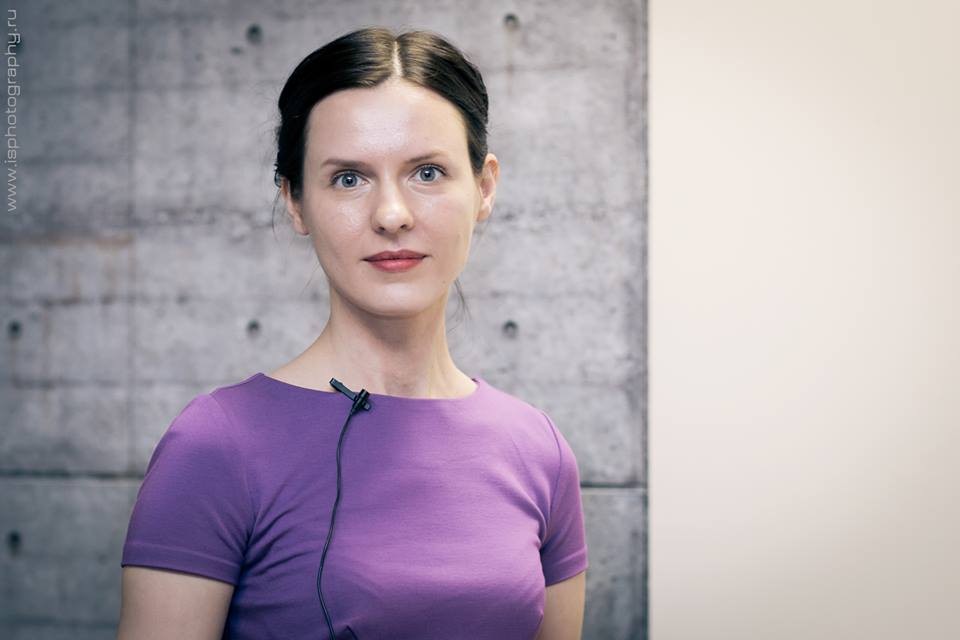 "Sberbank wanted to officially promote its Instagram profile. It selected the action "go to website" and directed a link to the account through the web version of Instagram. As a result, when a person clicked an ad, he was redirected to the web version and to subscribe Sberbank, he needed to be authorized in the web version. It is unlikely that someone readily enter his login and password because of the strong wish to be a subscriber of Sberbank. User had one more clickable option: "Open in the application." However, firstly, it is an extra step that users do not like. Secondly, when you click this option Instagram completely turned off. Conclusion:CTR was not tested; the company did not bother about the customer's time and easy viewing of advertising." 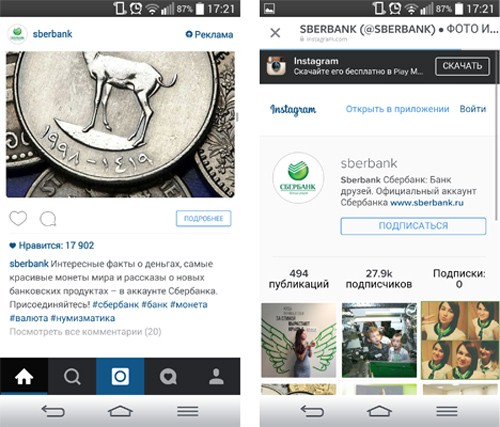 Interesting facts about money, the most beautiful coins of the world and information about the new bank products in Sberbank account. Join us!

Next reason for failure is the fact that imposed advertisements always irritate. It was so with the launch of similar services on the popular social networks Facebook and Vkontakte, it is happening now on Instagram. It will take some time before people accustom to seeing advertisements, and it do not cause negatives. Ekaterina Frolova, the author of the popular site PRO-SMM.com, tells about the same things: 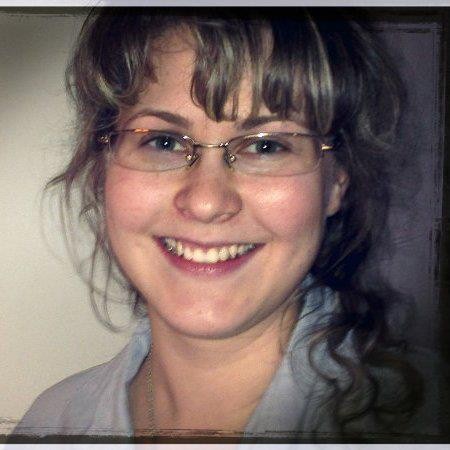 "While advertising is a rare curiosity for users. These are the normal cycles of the channel development, and we have already passed through it, first with advertising on Yandex Direct, and then advertising on Vkontakte and Facebook. The situation with Instagram will be the same." However, Ekaterina believes that the situation should be used, because it has another advantage: now Instagram advertising is cheap, it has no minimum limit, but six months later, when everyone will understand how to use and benefit, the price will be determined and jump up. Therefore, to seize the moment and succeed, you should throw all the forces on good content and best picture today. In this case, even unsolicited advertising will be of interest.

Expert Elena Piskareva cites the example of an unsuccessful imposed advertising: not original presentation of tattoo studio services displeased users, and they began to write about it in the comments to advertising. It is not usually possible to remove the comments to advertising posts, so the company had not taken into account the interests of the audience and conditions of the post publication; as a result, it has substituted itself. Customers who saw this post probably will never go to this studio to do any procedures, considering the reaction of commentators. 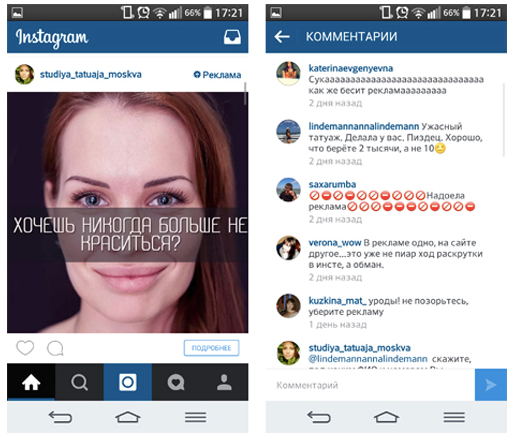 Hell, how ads drives me round the bend!
You’ve made a horrible tattoo! Great you take 2 thousand and not 10
Ads sucks!
Ads and website shows different things…. It`s not a pr, Insta promotion course, it`s a fraud.
You, jimmies! Don’t make a tit of yourselves, withdraw your ads

However, there are some good examples, even in imposed ads. A win-win solution is a humorous component of publications, such as the post of Knorr spices that was greeted with much hilarity among the audience, and also got a huge plus: users began