There are more than 55 thousand games present on Steam, and their number grows daily. In order to stand out of the pack and make sure that gamers will decide to play a game, it is important to properly pitch it on the platform.

Optimization of a Steam game account is one of important steps to raise the number of impressions and to appeal to gamers. When we talk about the engagement of the Russian-speaking audience, the first thing that is worth special attention is localization of the Steam game account into Russian.

Platform numbers speak for themselves:

What is to be translated? The game description and quick reference must be translated into Russian. Tags that you initially add to the game for quick search must be in Russian, too. The game's name should remain the same as one that you introduce to the market—you do not need to translate it. 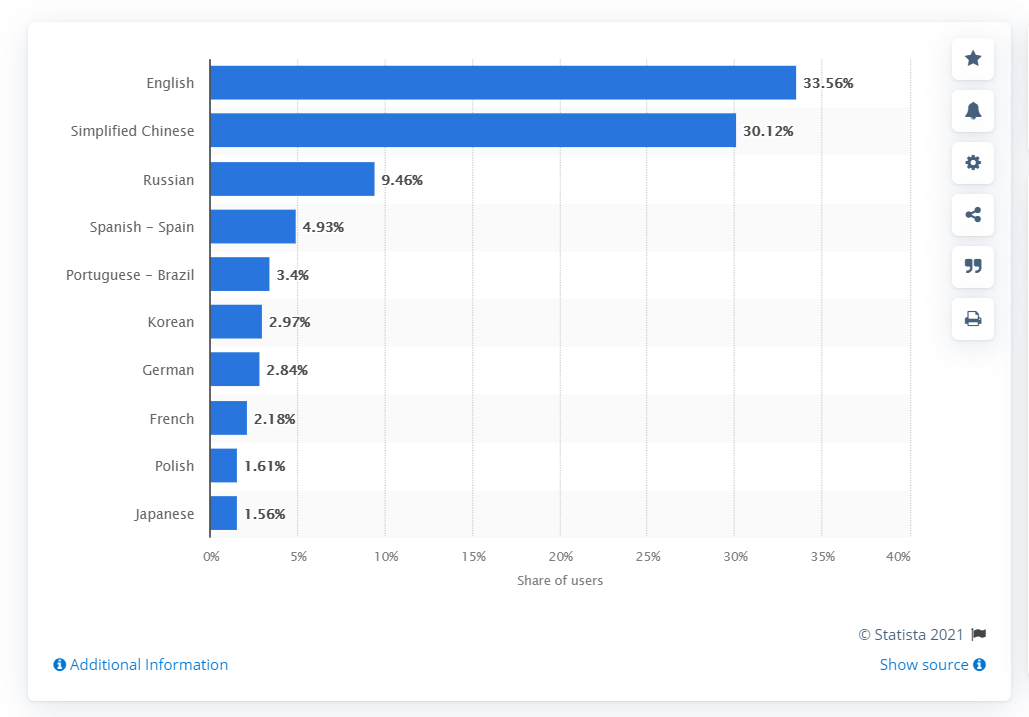 Source: Statista, Most common main languages of Steam gaming platform users in May 2021

It must be clear from the opening lines of the game's description what it is about. If your game is not AAA and is not shouted about from the housetops, you should pay special attention to the positioning of your game in the Russian market. This is another important point that will govern the tone of the Steam game account localization.

Please note that it is essential to tell users in a brief description what they will be doing in this game. It can't hurt to mention its genre again. 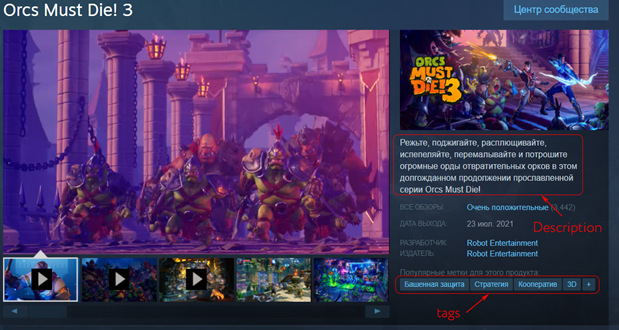 Images, banners, game screenshots and trailers are an important component that does strike the eye or does not. When looking for a new game, the first thing that Steam users pay attention to is an image on the game preview, or a thumbnail. At this stage, it is enough just to attract attention—if the picture looks unusual and appealing, users will mouse over it to get extra information, on the basis of which they will be able to decide whether they need to click through.

Screenshots help gamers understand whether a game belongs to a genre of their interest. They try to learn it from the interface and the game camera type.

Four screenshots that users see when pointing the cursor to the game are much more important for the success of the game than its trailer, since the great majority of potential buyers will never make it to the trailer. The screenshots must be chosen in a way so that they could show the essence of the game—this is what players expect from them.

As for the trailer, it must demonstrate gameplay and interface elements from the first frames—this is what gamers are interested in.

Reviews are not only an opportunity to hear gamers' opinions about the game but also a source of ideas for its development and search for appearing bugs. Developers have mentioned the fact that Russian gamers are happy to 'test' games, find errors, and share their recommendations long ago. On Steam, it is important to work with both negative reviews—here you have all chances to change feedback for positive, let it even be 1 out of 10 reviews—and positive ones—thanking for feedback won't go amiss.

Remember that users both look at the game status based on reviews and read them. Therefore, a game with a very positive status and with the developer's relevant response on top of that has more chances to be eventually bought by users.

Take care of marketing and coverage

Just putting a game on Steam is not enough. It will leave the first page with novelties for the end of the list quite quickly and will not be in the foreground any more. That is why it is of importance to elaborate a marketing strategy for game promotion even before the launch. We described a detailed plan of how to do it in the Russian market in our article Checklist for Promoting Games in Russia.

If you decided to market your game on Steam in Russia, RMAA Games experts will help you optimize and localize its description, clearly formulate its positioning, and promote your game among millions of Russian-speaking gamers.