What Ads in Russia Pay Off Better?

Every year marketers and companies’ heads face a lot of problems:

Nielsen conducted a research of return on investments made in advertising campaigns via various media channels using ROI. A similar study in 2018, but involving only Internet channels, was made by Roistat. Here we share data from these studies that will help answer questions stated above.

*Marketing mix model building by Nielsen covers the period from 2014 until 2018. In 2018, there was an analysis of efficiency of more than 1,000 omni-channel advertising campaigns with a total budget of more than 8 billion rubles for more than 120 brands in various communication channels (TV, radio, web banners, online video, placement in social media, out-of-home ads and other digital and traditional media). The analysis made mostly in the FMCG market (85% - FMCG, 15% - non-FMCG).

What Advertising Channel is More Efficient?

In 2017, the average ROI for all media channels was 0.97, i.e. every ruble invested in advertising brought 97 kopecks of a short-run effect on sales (during the placement and up to 3 months afterwards). In Europe, the average ROI varies from 0.2 to 0.4, which is related to higher costs of ads in the Western world.

The study by Nielsen demonstrates that media channels affect the customer demand more and more. As compared to 2015 when ROI came down to 0.6, the following years show positive dynamics. 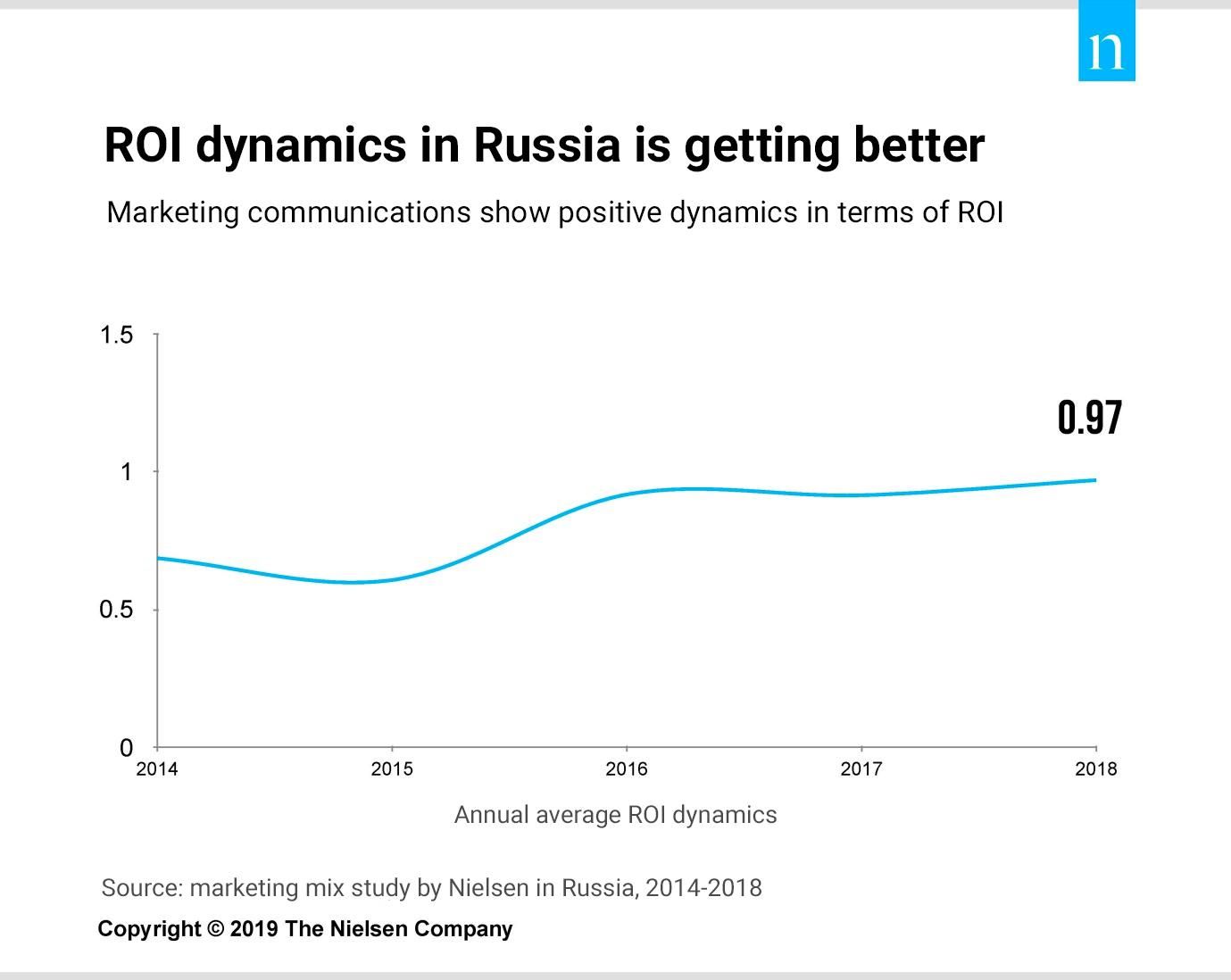 Banners and online video, on average, bring a twice as larger return on investments than TV, while social media (including bloggers) demonstrate even higher rates. That is why TV suits least of all for a short-run effect from sales—ROI for TV ads is only 90 kopecks coming from 1 ruble of investments. At that, the volume of aftersales from TV ads exceeds the aggregate volume of sales via other channels two and a half times. 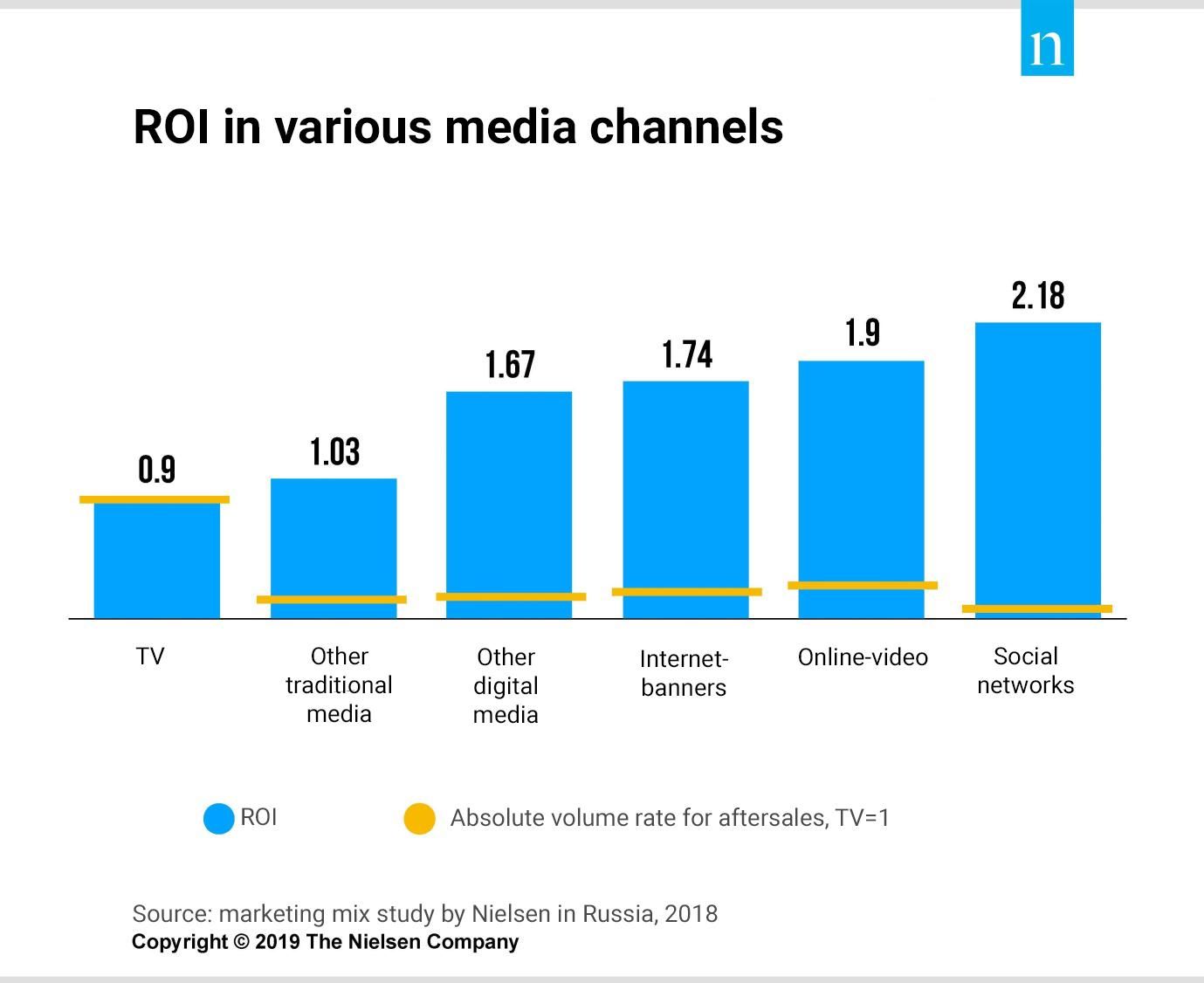 In the long run, the most stable channel is TV—it shows the smallest ROI fluctuations. Social media, on the contrary, are notable for a high divergence of return in various advertising channels. In digital media, the situation is reversed—higher average rates are accompanied with a substantial divergence of ROI from campaign to campaign, and in some cases it turns to be even lower than on TV. 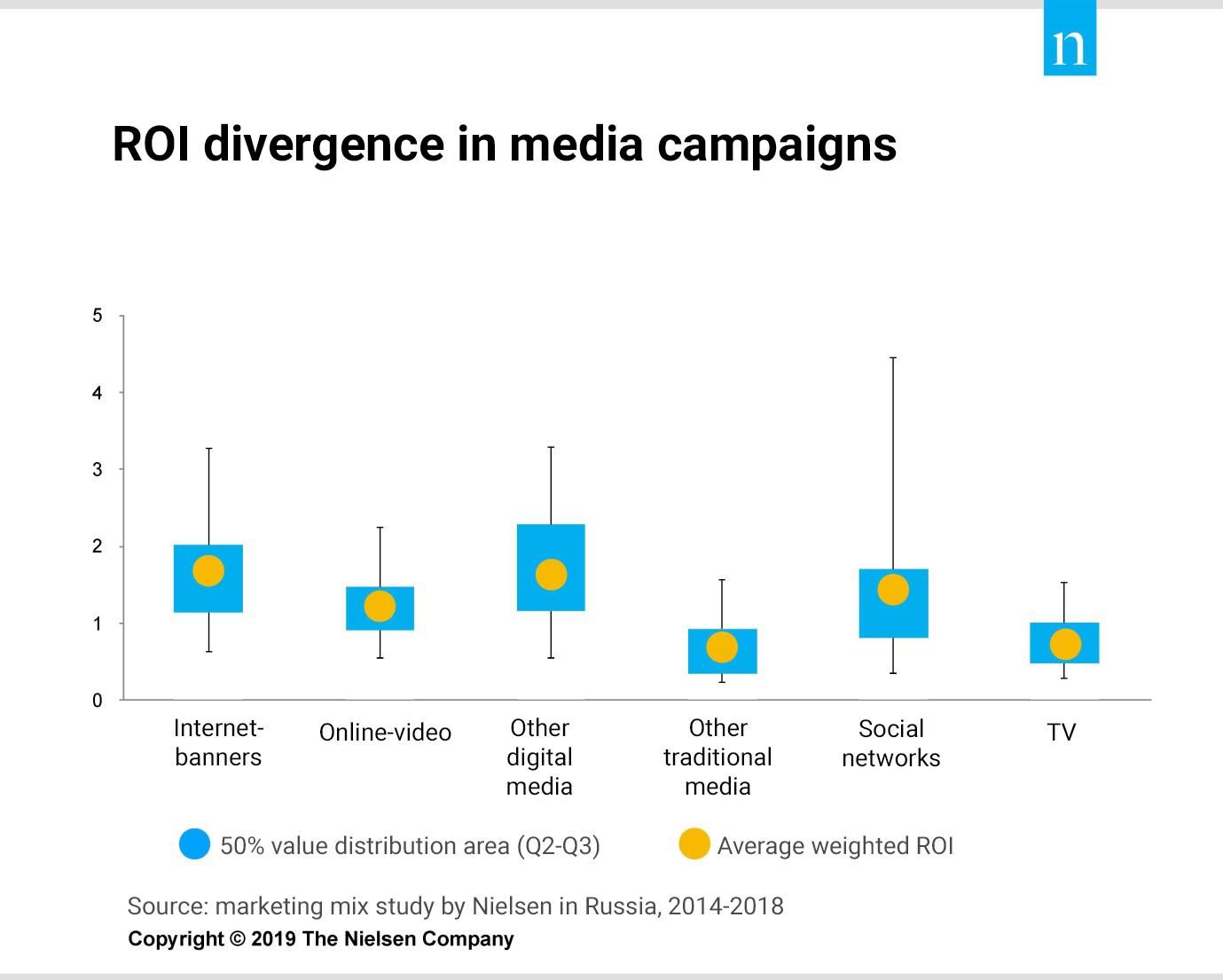 We multiply highlighted the importance of omni-channel for promotion to achieve the best result. Nielsen experts determined an optimum quantity of advertising channels per one campaign—4. This is the number of simultaneously used channels that will give the highest ROI. Using three advertising channels, we will get 0.7 ROI, using four, higher than 1; when using more channels, ROI systematically goes down, but the result becomes more stable.

Roistat (end-to-end analytics system) annually conducts a study to evaluate efficiency of advertising tools on grounds of aggregated and anonymous data from thousands of advertisers. In 2018, 5,000 advertisers were sampled.

Return on investment was calculated using a formula: 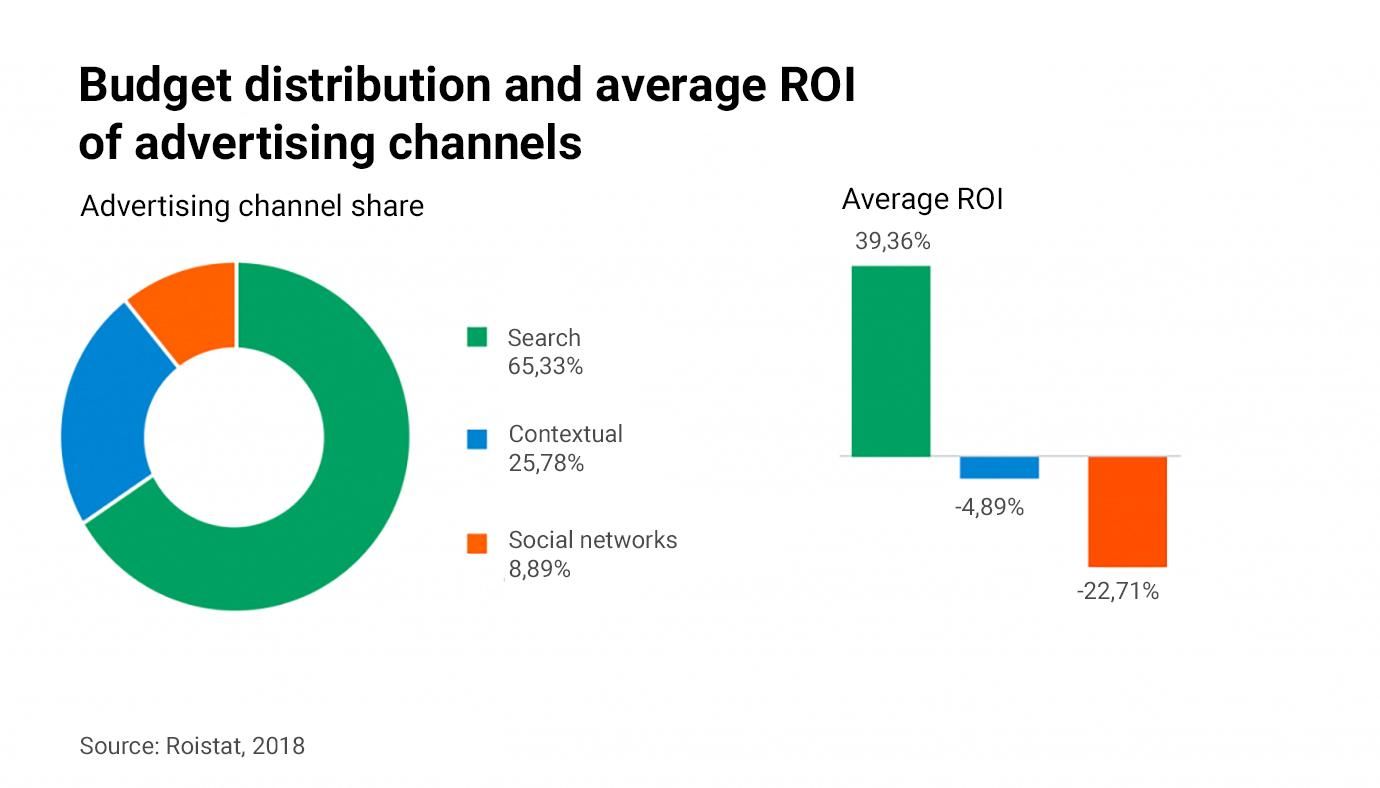 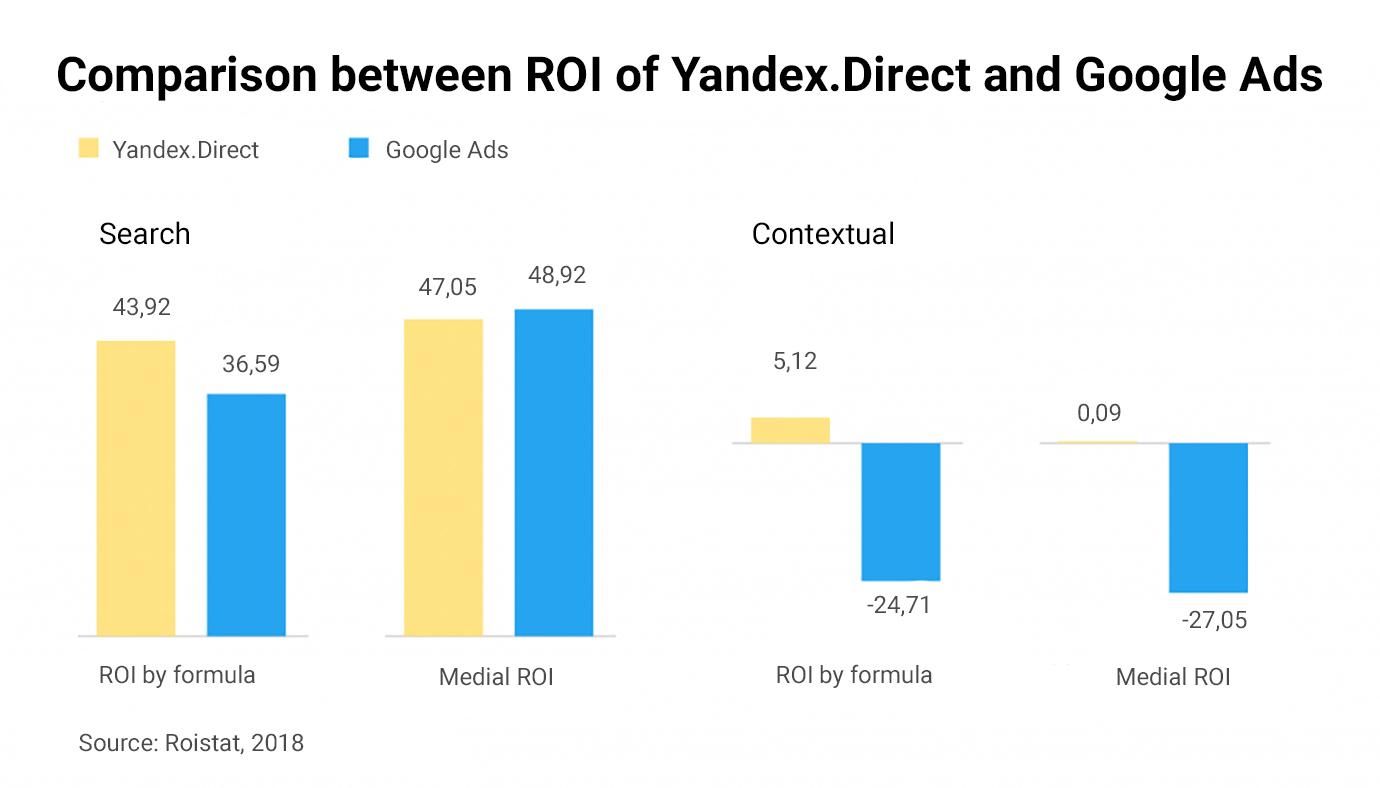 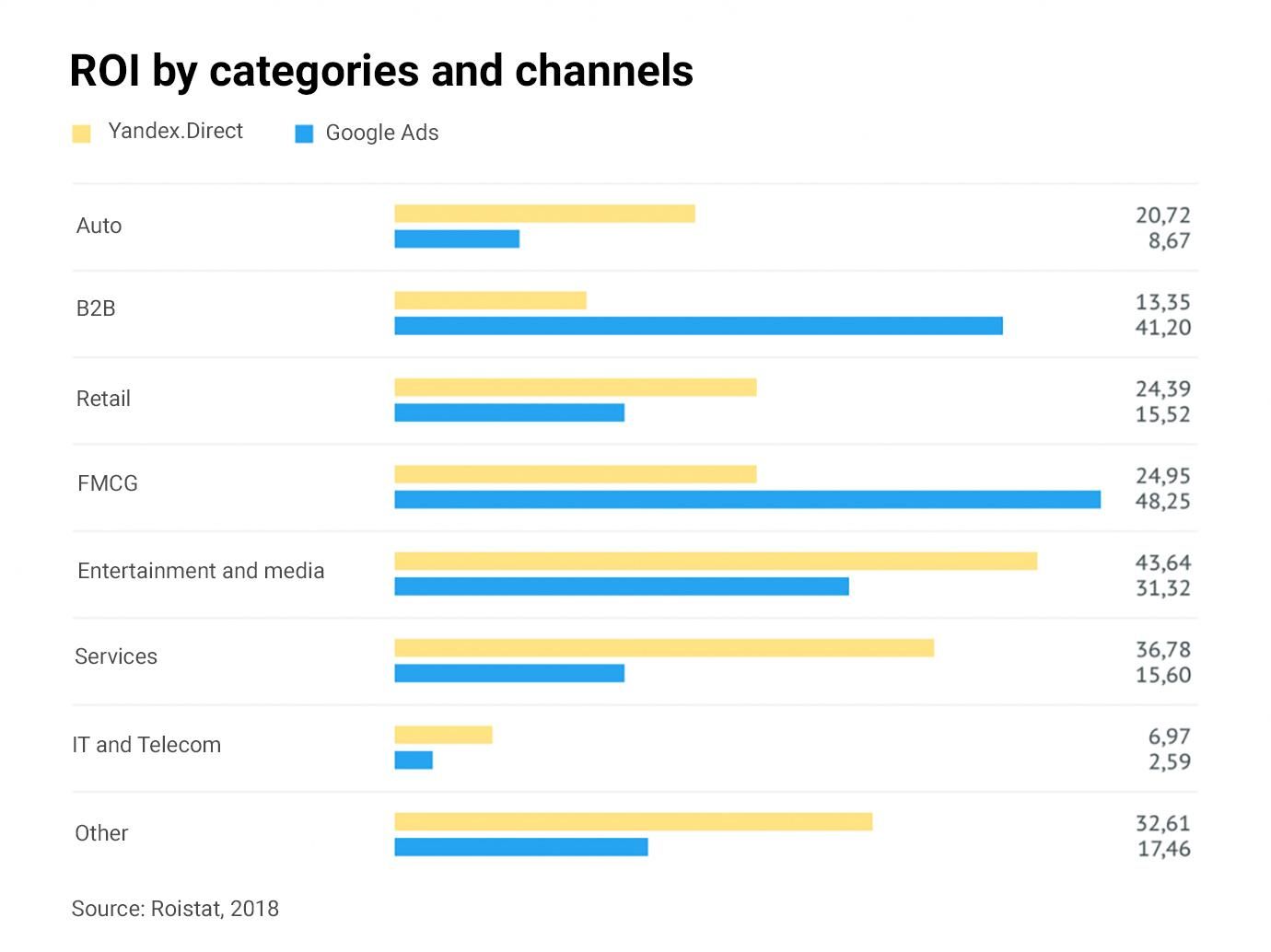 If we look at ROI in the context of industries, Google Ads showed the highest efficiency in B2B and FMCG, while Yandex.Direct leads in all others by a clear margin. 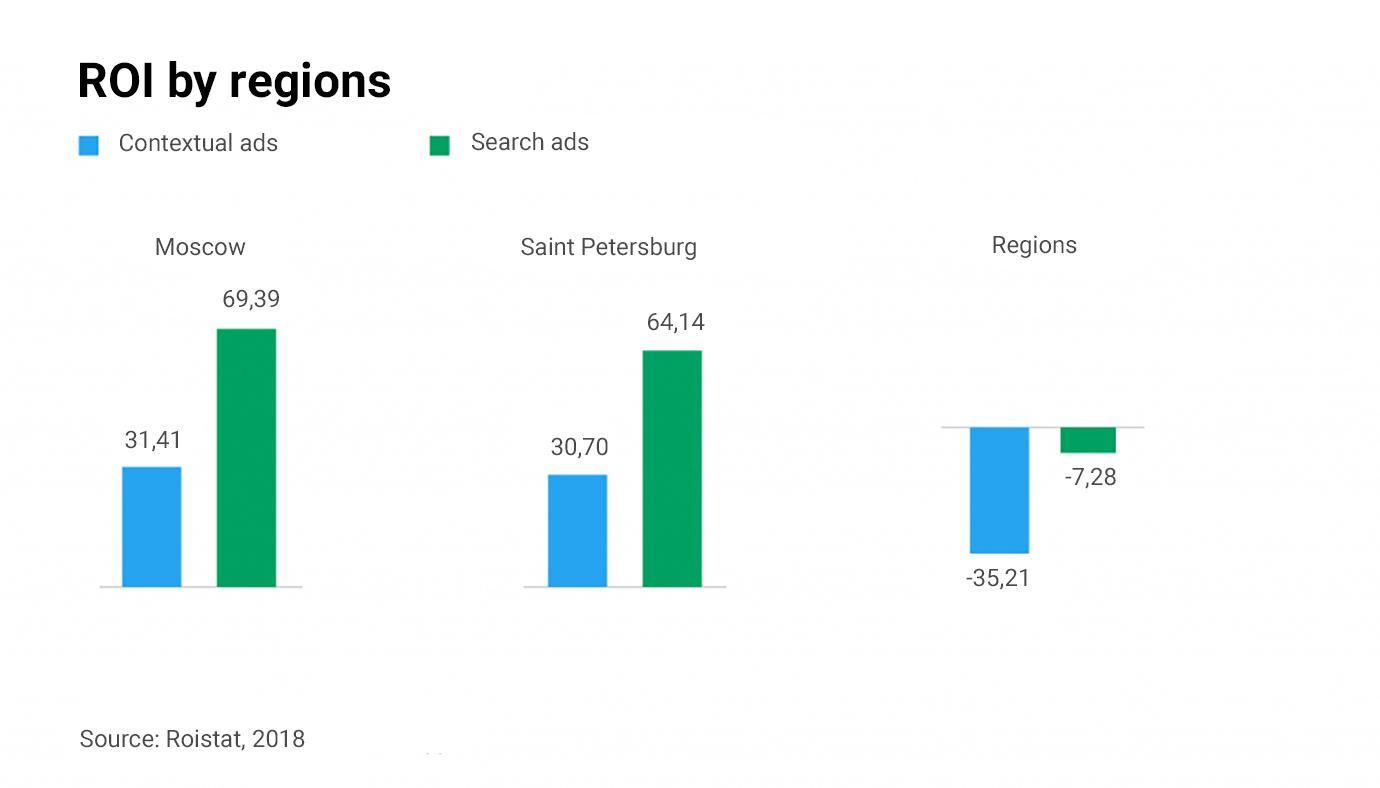 The highest conversion from bids to sales is seen in FMCG. This may be caused by a small average bill and a quick turn of fast-moving consumer goods. If people came to order some dog food, they do not have many reasons to cancel the purchase at the finish.

If you promote your business only online, when setting up context ads in search and networks, pay special attention to geotargeting. Any changes in advertising campaigns can affect ROI—follow statistics, analyze, and draw right conclusions.

Otherwise, delegate media planning and advertising settings to experts from the RMAA marketing agency, and we will choose optimal promotion channels for your business in the Russian market.