The COVID-19 pandemic has played an important role in the game market growth. When the whole world happened to be out of whack with habitual travels and interpersonal communication, when it became impossible just to walk on the streets and enjoy offline entertainments, many people went online and chose games for interactivity and communication tool.

According to SuperData, the provider of market intelligence, in 2020 the global game market increased by 12%. Throughout the year, games and interactive media earned almost $140B in total. Out of them, mobile games earned more than a half ($73.8B), PC earned $33.1B, and consoles $19.7B. Interactive media (gaming video content and XR) generated $16B in aggregate.

The COVID-19 pandemic played a tremendous role in video game popularity growth all over the world. While early in 2020 the increase was only 6%, it became much higher (14%) from March until December, as compared to 2019.

As for new games, the same tendency survives: new IP are only a small part in the list of first runs. In 2020, Ubisoft, Microsoft, Sony, and Nintendo released only two games each, which were not sequels, reboots, add-ons, or spin-offs. Activision did without any novelties at all. With this in mind, the mere Nintendo released 17 games during the year.

As far back as at the end of the 2nd quarter 2020, it became obvious that the game market is one of the main pandemic beneficiaries as even those who never played before came to games.

According to Statista, the video game revenue in Russia equaled to $2.5B in 2020. The increase in revenue of the Russian game market was double the world market and equaled to 25%, as compared to 2019. Mobile games in Russia in 2020 ensured 60% revenue.

As forecast by Statista, the growth dynamics will freeze a little bit in 2021, but will remain positive, and the revenue in the video game market will exceed $2.7B.

The number of gamers in the mobile segment significantly increased in 2020, from 30.3M to 35.8M, with an 18% increase. The rise in the number of online gamers equaled to 21%, or 15.9M users. Substantial dynamics in 2020 was demonstrated by a segment of so-called gaming networks*—it increased by more than 25%, and the number of its users hit 3.7M.

2020 Top Video Games from the Perspective of Russian Gamers

According to a survey conducted by 3DNews.ru and taken by its 11,206 readers, The Last of Us Part II by Naughty Dog took the first place, while the much-hyped Cyberpunk by CD Projekt RED ended with taking the second place. Half-Life: Alyx by Valve, released in the beginning of the year, was the last game to make the top three. 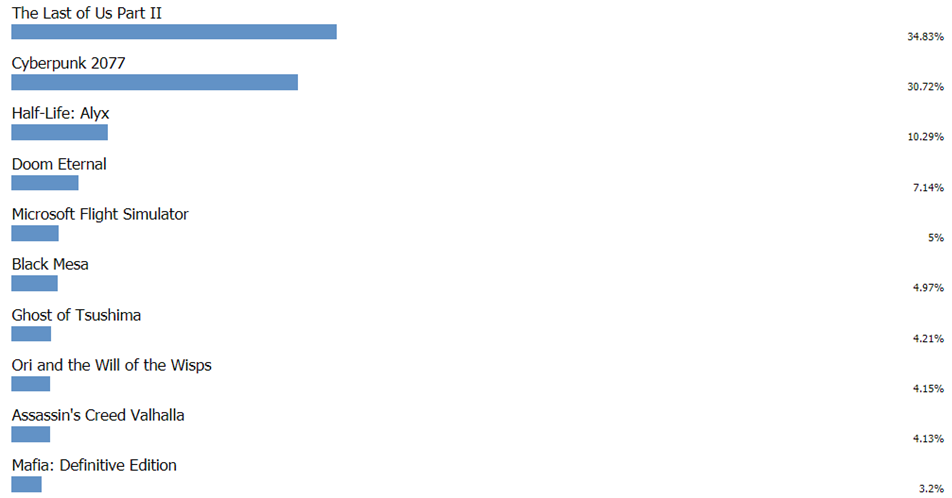 Do you want to keep abreast of the situation in the gaming industry in Russia and the CIS countries? Download our free White Paper Guide to Online Games Promotion in the Russian Market, and you will learn:

*Gaming Networks refer to paid subscription services for getting access to premium online services such as Xbox Live Gold, PlayStation Plus, or Nintendo Switch Online.