Activities of Auto Brands in Russian Social Media: What Content Do Drivers Prefer?

Social media is one of the key channels to communicate with customers. This relates to auto manufacturers, too. Each brand is presented in three and more social media in Russia.

We analyzed the August content made by official auto manufacturers out of Top 10 in terms of sales in Russia and found out several distinctive features that help brands maintain communication with car owners and, what matters most, find brand advocates.

So, let us start from some numbers. We analyzed the content from VKontakte accounts in August and found out not only the most popular topics, but also official groups of popular brands with the highest engagement.

The table below shows the rating of groups of Top 10 brands in Russia made on the basis of the average ER of all posts in August 2019.

Official social media accounts of most popular brands in Russia are not less popular among Internet users. The page content is aimed at both those who already own a car and at those who are only going to purchase one.

It is no surprise that types of posts in the accounts are somehow similar:

Accounts of different brands only differ in how often they publish one or another type of posts. So, for example, Renault prefers posts with polls while Nissan gives its preference to advertising posts, thus being a remarkable difference in ER of both accounts.

Basically all brands of top auto sellers in Russia actively maintain their accounts in VKontakte, except for Ford that, unlike its competitors, posts not so often: only 2-3 posts a week, while other brands publish 5 and more posts weekly.

According to the results of the study, posts with polls showed the highest ER. What is more, they even beat out contest posts and content with game mechanics, which work best most often, by involvement attained. That is why, if you promote an auto brand in Russian social media, pay attention to this communication format. By doing so, there can be all kinds of questions, from ‘Who caused MVC?’ with a video to ‘How do you like these changes in our car?’

The simplest mechanics let you involve users, increasing posts’ organic reach by this. At that, a poll is just part of a post where you can share useful information on the brand with users, having completed it with video or pictures. 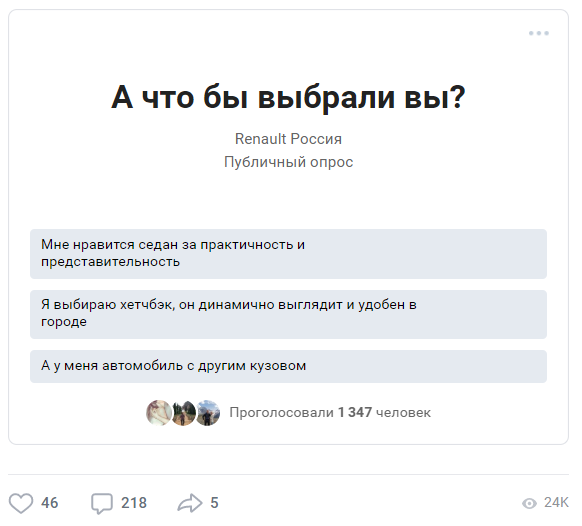 Comments: To Reply or Not To Reply?

There are not so many comments in the auto brand accounts; however, some brands pass them by and disdain to answer questions. And how wrong! An active dialogue with users will let you not only handle objections that users might have, but also increase brand loyalty and get brand advocates—car owners who treat the brand positively and are ready to prove its advantages to others.

Car owners are happy to share their cars’ pictures in their accounts with a brand’s unique hashtag—the more actively the brand encourages users to share their pictures and car ownership experience, the more content they get. Such posts have only advantages: you get a review for publication, which is content of good quality, while a car owner, in his or her turn, is pleased that a big auto brand mentioned his or her very content, and he or she will more likely become an even more loyal group member. What is more, someone’s example becomes infectious for others—group members just start sharing pictures of their favorite cars in comments.

So, for instance, Mitsubishi in Russia encourages users to share their car pictures with the tag #МойMitsubishi (#MyMitsibishi). 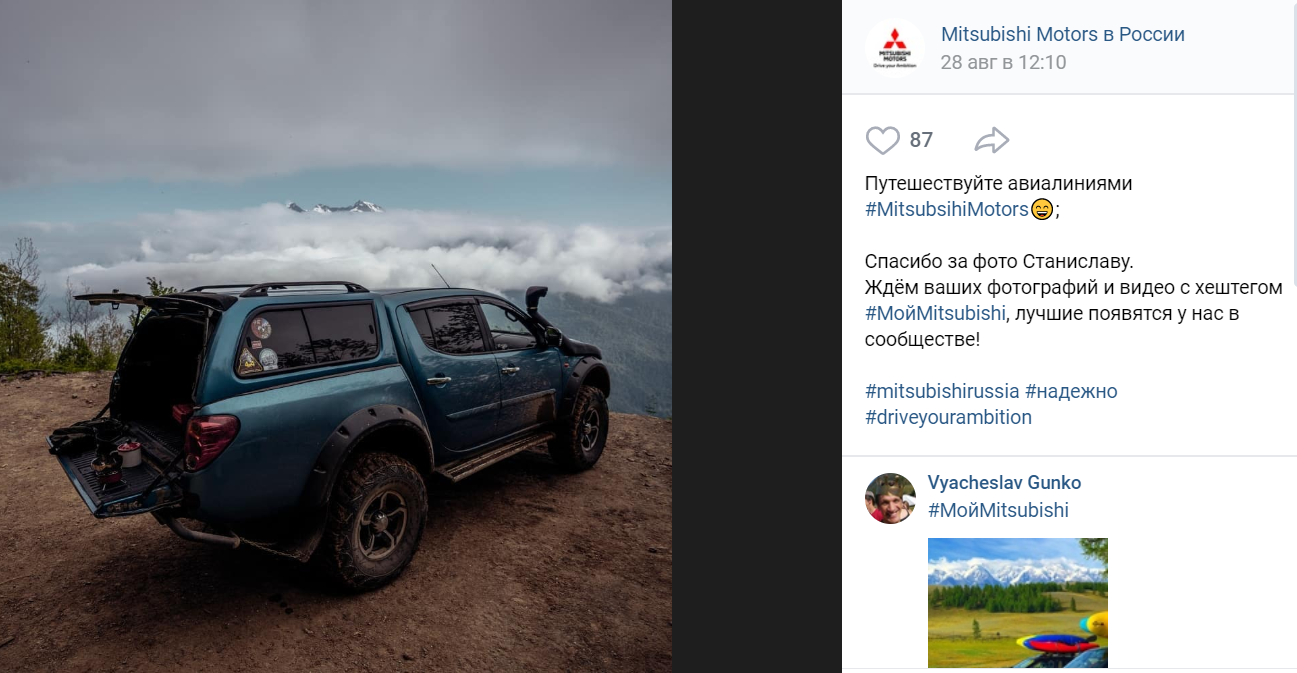 How Else Can You Involve Drivers?

Do not forget to include contest and games into the content plan. However, do not overdo and remember: the simpler the mechanics are, the higher the involvement of users is. Puzzles, quests, emoji—experiment with games and do not forget to integrate a brand and/or car theme into the game. Here is a brilliant example of an emoji puzzle of Kia—users were proposed to guess what movies are emoji-keyed on number plates of branded cars. 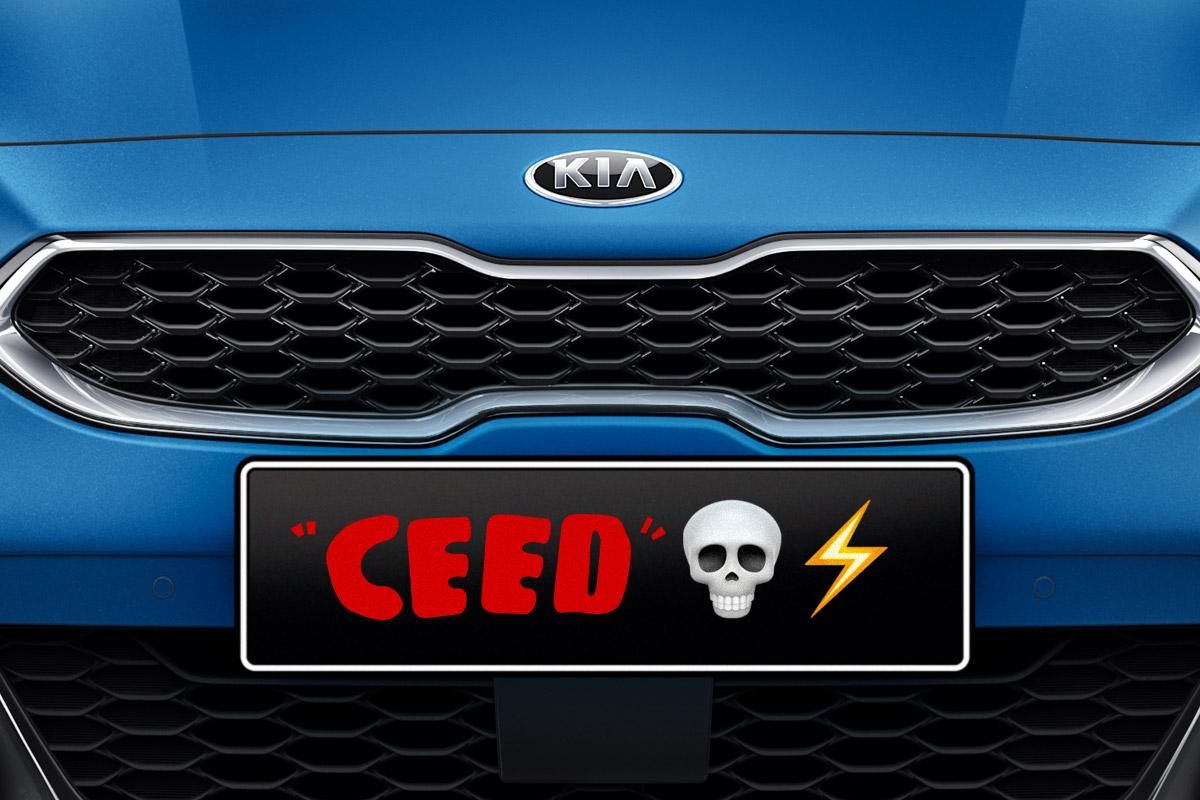 We brought up importance of car brand online presence (in particular, in social media) not for nothing because comments of ordinary users and reviews in the brand account can play a critical role when choosing an auto.

According to the study made by AUTOSTAT experts, the most popular source of information about cars is online reviews of their owners. This possible answer takes the first place in the rating, having 50.5% votes of respondents. It is worth noting that male audience trusts this source much more than female one (53.8% vs. 47.2%). 41.4% respondents follow advice and reviews of their friends or acquaintances in general, while most of them are women. Practically the same number of men and women visit websites of dealers and auto manufacturers, while their share equals to nearly 35-36%. The last one in Top 5 information sources when choosing a car is consulting by sellers in dealership centers—they were mentioned by 34.6% respondents, with a majority of female drivers (39.9%).

It is not unexpected that male audience, being more technically advanced, is more interested in auto websites and online reviews of car owners, while female audience, for which it can be more difficult to dig into technicalities, trusts sellers’ consultations in dealership centers and reviews of their friends/acquaintances more. 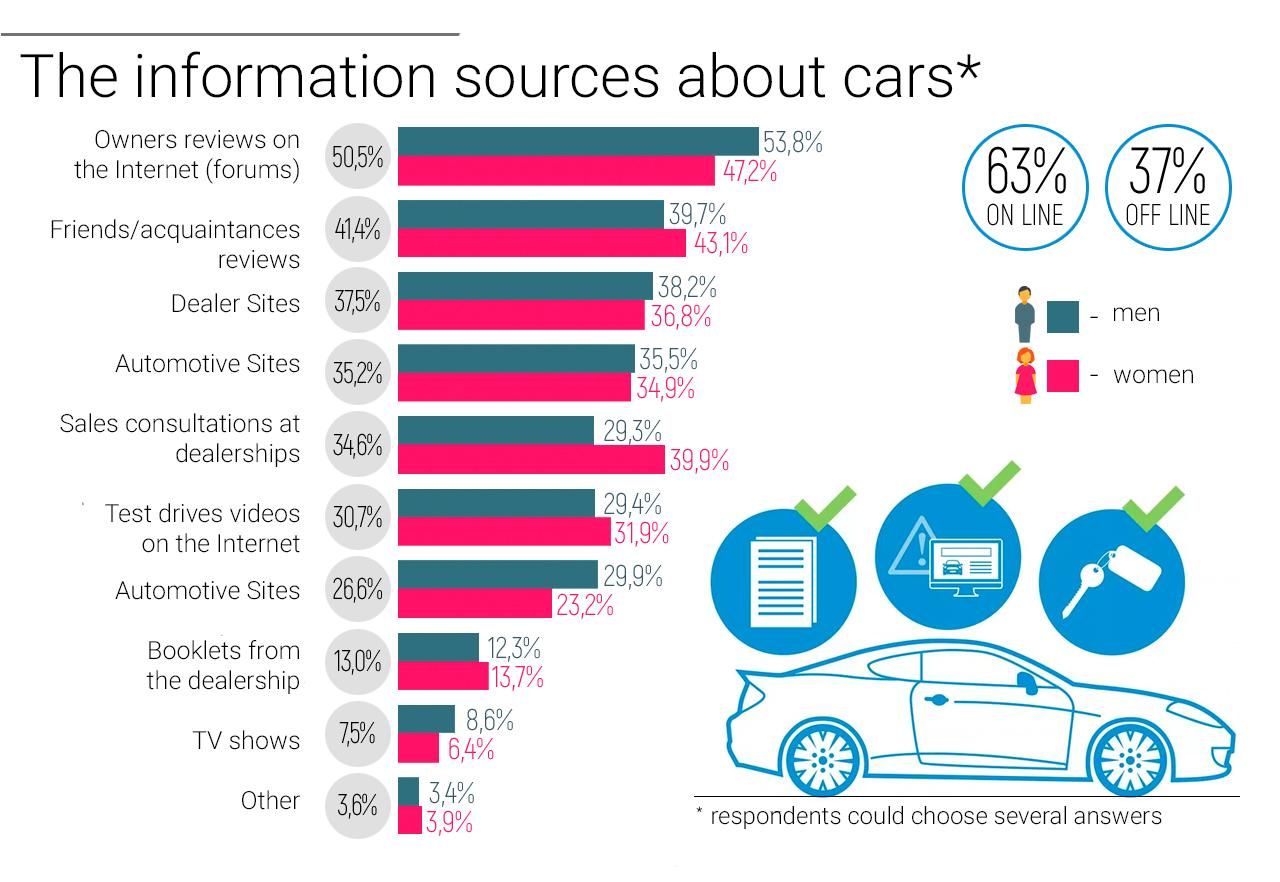 When promoting an auto in Russian social media:

Meanwhile, our White Paper ‘Russian Digital Market Overview 2019’ will help you choose the most efficient channels of online promotion and analytics of your advertising campaign in the Russian market.