How to Promote Your Mobile Game in Russia

According to App Annie, Russians spent $744 million on mobile games in 2019. Last year, the Russian market showed 44% growth. It is no surprise that today many IT companies switch to mobile game development as the demand for them is high.

In our earlier article A Complete Guide on How to Promote a Mobile App in Russia in 2020, we have already described standard tools to promote mobile apps in the Russian market. In this blog, we will share with you the simple guide on how to promote your game in Russia.

We know that every developer considers their game to be unique and that it will definitely find its audience. But is it true? Not always. That is why, before you offer your mobile game to Russian users, learn the demand at least at the most basic level—web requests and genre popularity.

For instance, analyzing user requests in Yandex.Wordstat, we see that mobile casinos, strategies, and shooters are very well-liked by Russian users while RPG and adventures are way inferior to them.

When we talk about certain games, according to figures from App Annie published in the report ‘The State of Mobile 2020’, Top 5 downloaded mobile games in Russia in 2019 are as follows:

However, Top 5 mobile games in terms of ‘Consumer spend’ look quite different:

Find competitors’ games in the market and learn them, too: check what game functions and options of them score better than yours. You might have to refine your mobile game so that it would meet high market standards and become popular with Russian gamers.

iOS vs Android game marketing: which should you build your mobile game on first?

Just like in most countries of the world, Russians give their preference to Android. However, you should consider specifics and age of your audience. For example, according to Mail.ru, in 2019 every second user aged 18-24 had an Apple smartphone. Consequently, if they are your audience, you should pay special attention to making your game iOS-friendly.

This is a very important issue missed by some developers before starting mobile game promotion: translation of your game into Russian will let you measurably increase the percentage of installs and constant users of your mobile game.

According to LocalizeDirect, in 2019 the Russian language became the fourth popular world language, into which games are translated. Localization is not the least of the factors that can become a key one when a user will choose between two similar games. 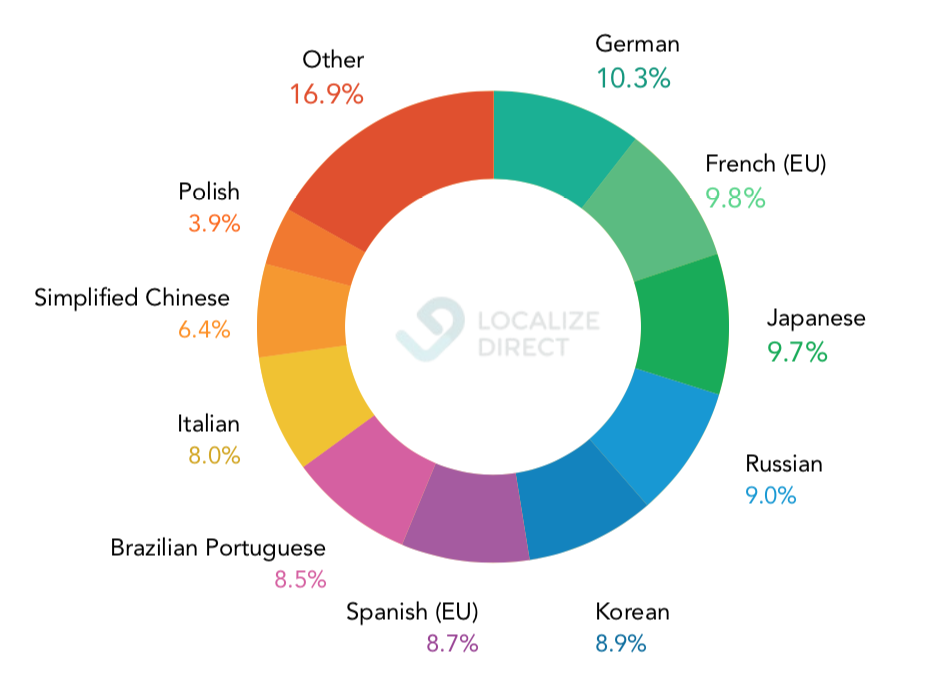 We went into details of paid optimization and promotion of mobile apps in our article A Complete Guide on How to Promote a Mobile App in Russia in 2020 – all these tools are also pertinent to the promotion and marketing of mobile games in the Russian market.

How to promote your mobile game?

What tools should you use?

Which ones will show best install results?

What channels will show more income-bearing installs in terms of LTV?

A test advertising campaign aimed at your mobile game installs will help you answer these questions.

Besides, if you decided to promote your mobile game in the Russian market, you must include local tools into your promotion strategy and test them: VKontakte and Odnoklassniki social media, Yandex search, Yandex.Store app store etc.

Thematic resources let you cover hundreds of thousands of users who are really interested in gaming, gadgets, and technological innovations, i.e. cover your very target audience.

In order to understand the audience of what resource will suit the promotion of your very mobile game, you will need to make a list of thematic resources about mobile devices and video games in the Russian Internet (for example, AppTime, StopGame, Gadgetplay, 4pda) and learn the media kit of every media.

Here you should also pay special attention to themed channels. You will have to look for and evaluate quality of channels (video, audience) in manual way. To look for channels, use themed key phrases like ‘top 5 new mobile games’, ‘top Android games’, ‘best games for smartphone’ etc. These should definitely be Russian-language channels.

There are many advantages in cooperation with influencers because YouTube videos are watched specifically by those who are interested in games and who may look for what to play. That is why you must tell vast audience about your mobile game via video bloggers.

Advertise your game via cross-promotion

Even if you are at the initial stage of a mobile game promotion, you will always manage to agree on cross-promotion with other developers. As for mutual promotion, we mean not a passive button (which users have to press on their own to install a game), but sort of a pop-up that a user sees while playing another pre-installed game.

The pop-up must not be demonstrated all the time, but when you show it, a dialogue with a user is being formed. One needs to demonstrate it when a user is, for example, in a store or doing a particular quest. A game developer should specify in-game moments when this pop-up may be shown.

The key is to give bonuses. One needs to understand that we irritate a gamer a bit when showing a pop-up. However, when we give an in-game bonus for making a certain action, his or her attitude will be at least neutral, if not enthusiastic.

Naturally, we should consider game genres, theme etc. to coincide somehow for cross-promotion.

When do you begin marketing your game?

Even before an official game launch in the Russian market, it is important to have a promotion strategy in hand and motivate gamers in a way so that the game could make a hit at the start and take top positions in app store ratings further.

How do you do it? You have two ways: to implement all marketing activities on your own or to rely on experts from RMAA Games who know the Russian market environment and specifics of mobile game promotion very well.