March 2022 turned out to be a period of dramatic online changes for Russians. It all started on March 4, when the Federal Service for Supervision of Communications, Information Technology, and Mass Media restricted access to Facebook* and Twitter in Russia. Then, TikTok and Instagram* were blocked, and on March 21, Meta* was recognized as an extremist company and its activities were banned in Russia. Against that backdrop, Youtube developers gradually began to close Russian channels on their service, Google – advertising cabinets. On top of that, some apps (like Spotify) have left the market.

However, the Russian audience was not ready to completely abandon their “favorite” online products.

Many citizens have taken care of this in advance, which is shown by the analytical data of several popular marketplaces. So, the developers of the data.ai platform stated that on February 28, 2022, 16 VPN services entered the TOP 100 most downloaded applications in Russia on iOS (two of them took first place in the ranking), and 8 VPNs – in the TOP-100 for Android. In other words, the Russian audience (though not 100%) still continues to use blocked resources, bypassing restrictions through VPN. 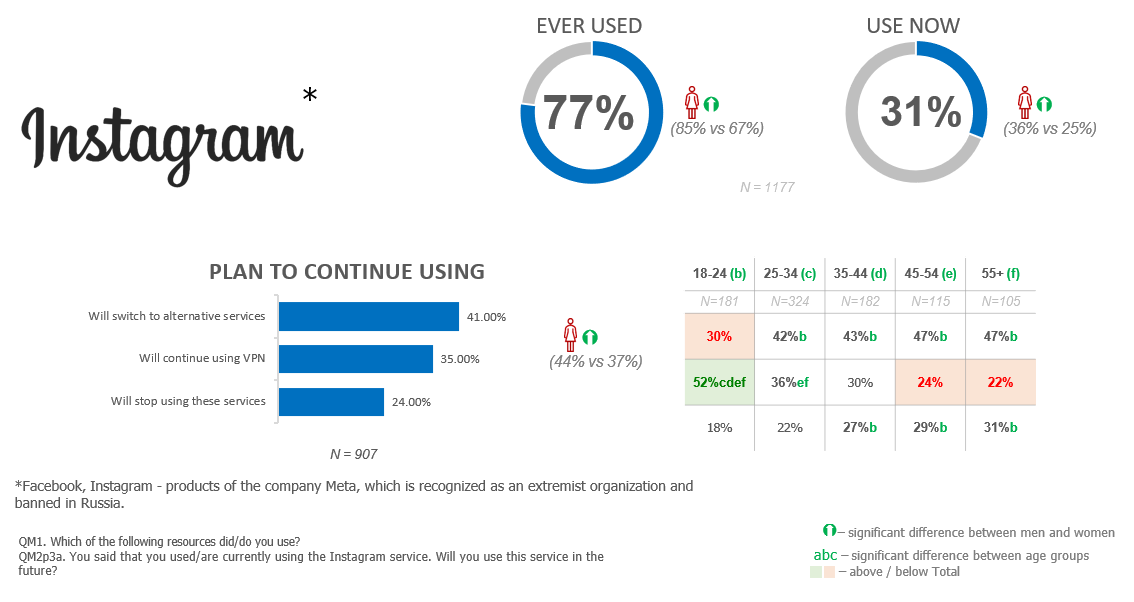 Source: OMI, the study “Dynamics of changes in consumer behavior, media consumption and perception of the situation”

Indeed, based on another study from Online Market Intelligence (OMI), this trend can be traced. Thus, 35% of the current female Instagram* audience in Russia continues to use the resource through VPN. For Facebook* and Twitter, these figures are much less than 18%, but still, a certain percentage of users still remained there. Besides, you can’t ignore the Meduza** online media, which became one of the most downloaded applications in Russia at the end of February (according to data.ai). Viewing this resource in the region is also impossible without connecting to remote servers. Many other resources currently blocked in Russia, but still in demand among regional users can be added to the list. With the help of VPN.

In general, VPN can be described by such important parameters as anonymity and free surfing on the Internet. During a usual connection (visiting websites, etc.), all user requests go directly to the server of the service provider, which sees these actions and can limit them. If a VPN is connected to the device, then requests are transmitted in encrypted form to remote resources. In other words, the provider does not see the user's actions, therefore, he is unable to block access anywhere.

This feature provides many advantages:

In addition, most VPN programs are easy to use and have a fairly user-friendly interface with a quick connect button.

Therefore, the number of users of VPN services in Russia is increasing every day. AtlasVPN specialists are sure of this, having registered a record percentage of installations in the region on March 14 – by 11, 253% compared to previous years. Most likely, this figure will increase further. As Russians are increasingly beginning to understand the advantages of VPN programs, thanks to personal research, advice from friends and, of course, competent promotion of VPN products on the market. 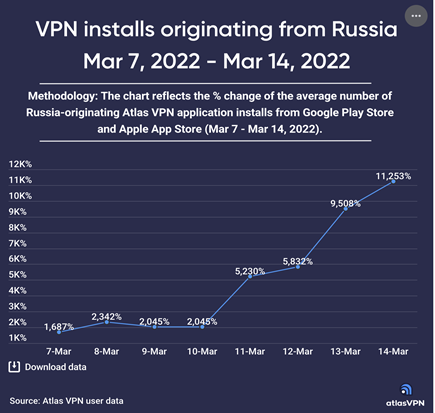 After analyzing data from several online sources, RMAA experts compiled a list of VPN resources that became the most popular for the Russian audience in early 2022. AppStore, Google Play ratings, as well as data from the Russian mobile operator Yota were used to prepare this material.

Application that occupies high positions in all ratings. Besides, the service has a huge amount of positive feedback, thanks to the high connection speed (250 Mb/s) and lack of need to register when using it. Application developers do not limit clients in the number of connected devices. Additional antivirus functions and automatic ad blocking are service benefits. SurfsharkVPN can be connected to various platforms, including Smart TV. A huge advantage of this VPN in Russia is the Russification of the application and the company's online resources, where you can get acquainted with all the features of the system in more detail. But there is a disadvantage – free use is possible for 7 days only.

Cost after the free period depends on the tariff ($12.95/month is a minimum tariff). Payments can be made in Euro, US dollars, and cryptocurrency.

Marketing promotion tools in Russia:Russian version of the site with a detailed description of the application.

Leader among VPN services for Yota clients (traffic share was 55.9% for the period from March 28 to April 3). The service is designed for a business audience, allowing you to connect branches and departments of large companies around the world to remote access. The main product of the company is OpenVPN Cloud (the ability to create a private cloud network), which combines various functions for a more convenient work for employees.

“Our multi-tenant cloud service has a high-performing mesh core network that is spread out across multiple countries and offers multiple regional connection locations worldwide. New regions are continually being added to our managed service creating global worldwide coverage”. – OpenVPN developers write, explaining the principles of work within their service

In other words, this VPN is a cost-effective and secure solution for small and medium business customers. Moreover, the developers offer their customers individual solutions and tariffs. At the same time, OpenVPN will be absolutely inconvenient for “regular” users due to the lack of a free version and other entertainment features (for example, connecting to Smart TV services).

Main advantages: the ability to create a private remote Internet connection for all employees of the company, individual solutions for business.

Marketing promotion tools in Russia: there are none as such, BUT the company has a clear positioning of its product on the international market.

Another Russian-language service that “won” high user ratings in the AppStore and Google Play. The application has a free version as part of the work from one device and some ads when using. Therefore, TurboVPN has become one of the most sought-after resources among the Russian audience in 2022. The program is available for all popular Internet platforms, while the developers guarantee safety of data with “banking” level encryption and IPSec, OpenVPN protocols. On top of all, the system has fail-safe protection to ensure uninterrupted connectivity. TurboVPN has a huge number of services – more than 21,000 in 45 countries, which allows you to open any blocked streaming services and programs (like Netflix) at high speeds. For Russian users, there is Russian-language technical support.

Cost of the paid version depends on the tariff ($11.99/month is the minimum tariff). Like SurfsharkVPN, payments can be made in cryptocurrencies and through UnionPay.

Marketing promotion tools in Russia: the Russian version of the site, the page on VKontakte is also indicated (not updated since 2021).

At the moment, the service ranks first in the AppStore rating, and also has a high rating (4.9) from Google Play users. The developers offer to try the program for free – the first three months, thanks to which VPN Proxy Master has become one of the most downloaded applications in Russia lately (about 150 million customers worldwide). The wide possibilities of the service guarantee the uninterrupted operation of servers (of which there are 6,000 in more than 40 countries), as well as the ability to connect up to 6 devices at the same time. In addition to standard Windows, Mac OS, iOS, Android systems, the application works with TV gadgets. The VPN Proxy Master interface is designed mainly for the English-speaking audience, so it will be inconvenient for those who are used to work with programs in Russian.

Cost after the free period depends on the tariff ($12.99/month is the minimum tariff). Payment for Russian citizens is possible through the UnionPay system, Qiwi, and also with cryptocurrency.

Marketing promotion tools in Russia: there are none as such, promotion is facilitated by high ratings on marketplaces.

Service stands out from the rest thanks to a competent marketing strategy that the brand broadcasts around the world (including Russia).

“We created ProtonVPN to protect journalists and activists who use ProtonMail. ProtonVPN breaks down the web's censorship barriers, allowing you to access any site or content.” (note: information on the company's official website).

Following this principle, at the end of March 2022, the developers opened free access for Russians to media and social networks blocked in the region. The list of “open” resources includes such information platforms as Meduza, BBC, Mediazona, Radio Liberty, Voice of America, etc. Also, Facebook*, Instagram*, Twitter and Linkedin. This decision was justified by the fact that now it is especially important not to restrict access to the tools through which Russians are used to learning news, communicating, conducting scientific and financial activities.

Also, the recommendation to use ProtonVPN was seen on Instagram* before blocking the resource in Russia. It belonged to the well-known Russian journalist Ksenia Sobchak, which once again “emphasized” the course of the developers in the media positioning of their product.

Among the advantages of the service, one can note the free version (with a limited number of servers), high connection speed, ad blocking and Russian-language support. The developers guarantee absolute anonymity on the network, protection and, when connecting a paid tariff, the ability to work on 10 devices.

Cost of the paid version depends on the tariff ($5/month is the minimum tariff).

Marketing promotion tools in Russia: public support for independent media, promotion through opinion leaders, the Russian version of the site.

The growth of interest in VPN services in Russia, which arose at the end of February, was noted by most marketing analysts. This tells us that these programs will be in demand in the future, as the Russian audience still plans to use the resources blocked in the region. Some people need a VPN connection for entertainment and social purposes, while others use remote access for business.

Depending on this, a huge number of VPN products have appeared on the Russian market. After analyzing the popular programs among the Russian audience, we came to the following conclusions.

Firstly, Russians choose a VPN service based on the app's high ratings and free usage. Due to this, one of the market leaders is VPN Proxy Master (3-month trial version), which does not have any promotion in Russia at all.

Secondly, Russified services, such as SurfsharkVPN and TurboVPN, can also be attributed to the market favorites. Particular attention should be given to ProtonVPN, which has not only a Russian-language website, but also a clear marketing strategy.

Thirdly, one cannot help but pay attention to OpenVPN with its advanced features for small and medium businesses. Moreover, the company clearly states its positioning in the global market. The growth of interest in the service among Russian-speaking users can be explained by the fact that it is quite difficult to find an alternative VPN product with similar business functionality.

All this tells us that when promoting VPN resources on the Russian market, a number of factors should be considered. Among them: high ratings on marketplaces, free bonuses for users, functionality, positioning and difference from the main competitors. RMAA experts will help you go further into the matters, attracting the attention of the right audience interested in a quality paid VPN.

* Social networks which are recognized as extremist and banned on the territory of Russia.

** Recognized as a foreign agent. 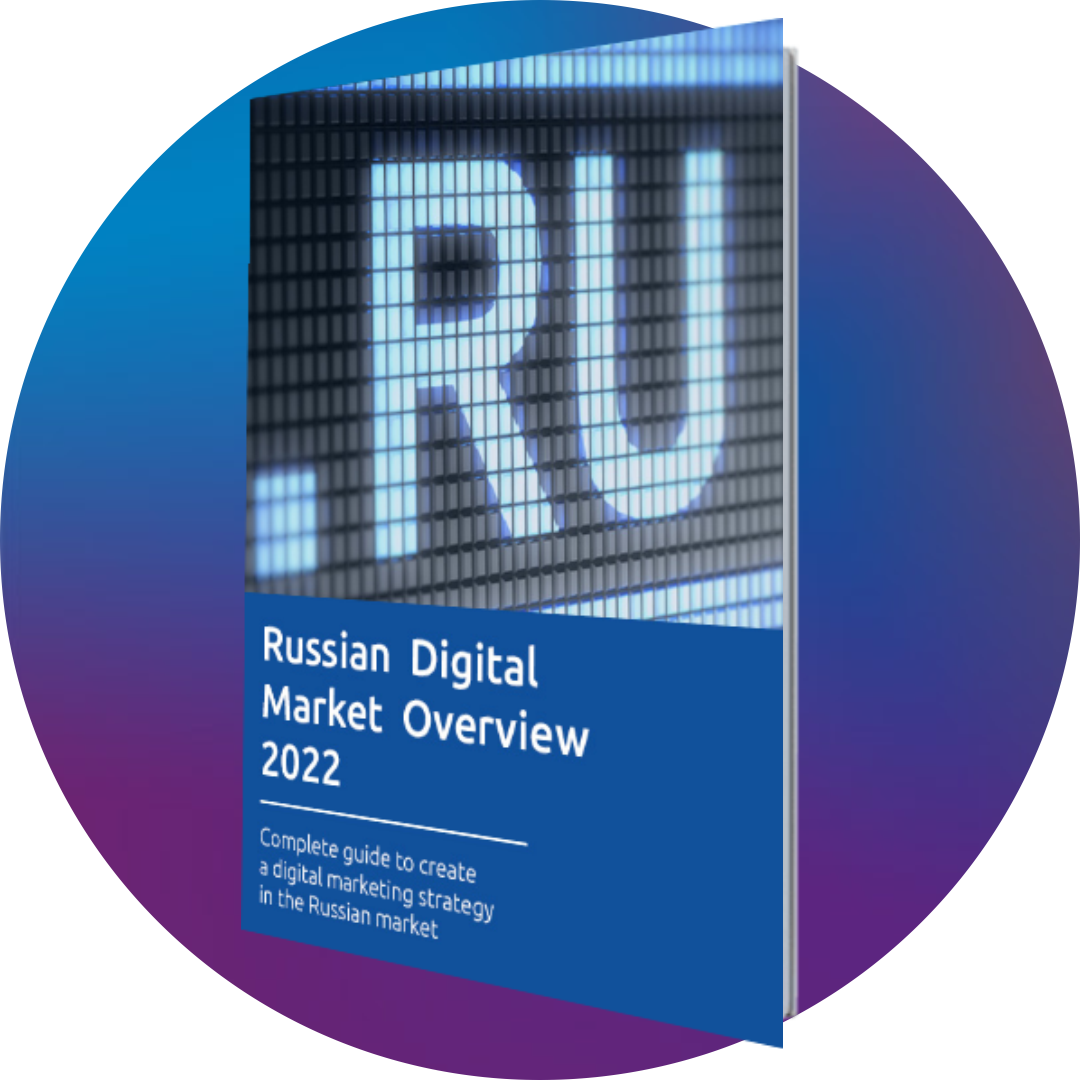 Author of the RMAA Blog 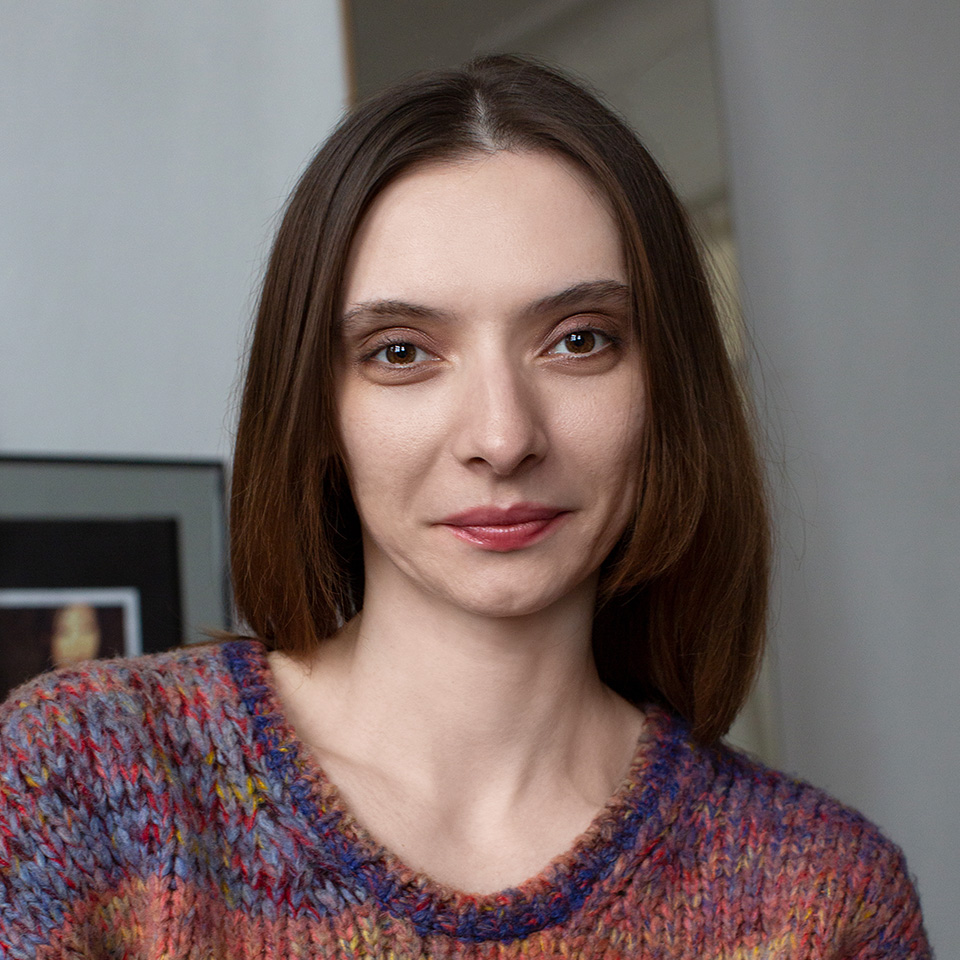