Multibillion revenues and ever-growing audience transformed modern games and e-sports into one of the main entertainments of the XXI century. Today, global game industry is one of the key drivers of the digital content market.

For more details download our White Paper “Guide to Online Games Promotion in the Russian Market”.

According to Newzoo, at year-end 2018 Russia took the 11th place in the world game industry revenue rating. The total revenue of the Russian game market proved expectations that the company had had before and amounted to $1.657 billion ($1.7 billion were expected). 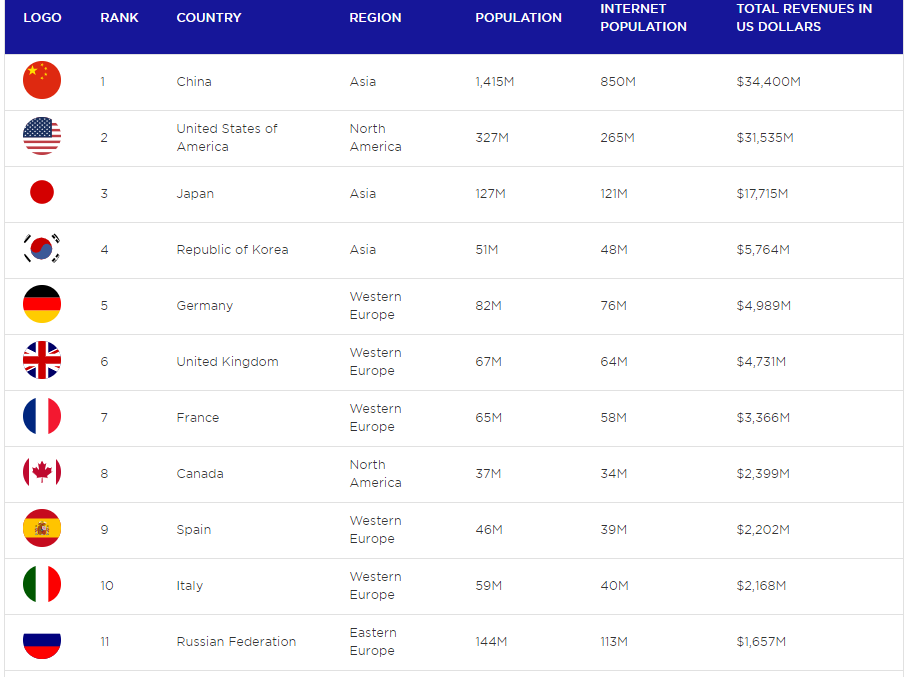 PC games in Russia are most popular among male gamers (60%), and mobile games—among female gamers (46%).

In 2018, the Russian PC game market turnover made up $736 million. As for gamers’ annual spend, Russian Federation is out-competed by only five countries: China, USA, Japan, South Korea, and Germany.

There is a considerable revenue difference between the first and the sixth places. While the Chinese PC game market generated $7.4 billion in 2018, the Russian one did only $736 million.

The Russian market grew by 9% in dollar terms, despite of a considerably weakened ruble.

In 2018, more than half of revenue out of $736 million—or $456 million—accrued to free-to-play games. The dynamics of this segment is higher than one of the whole platform, equal to 13%.

The most popular genres in Russia in 2018 became pay-to-play and free-to play shooters; next come free-to-play role play games and MOBA (Dota 2 & League of Legends).

In 2018, Russians spent $517 million on mobile games—this means the consumption spending amount and not the amounts collected by developers from stores—this information was announced by Alexey Vstavskiy, a member of App Annie. According to him, the average mobile game market dynamics makes up nearly 15%, while the Russian market showed a 25% increase in 2018.

‘Following the results of 2018, Russia takes the 12th place worldwide as per mobile game revenues and accounts for less than 1% of the world market (taking into account iOS, Google Play, and third-party Android services’, noted Vstavskiy.

There are 47.2 million active mobile game users in Russia, and, according to Statista, the number of players will be growing. This is caused by a higher and higher popularity of smartphones and mobile Internet. Besides, the segment age brackets expand as well: 71% children aged 3 to 10 play mobile games. At that, many parents encourage games with developing content and even play them together with their children. 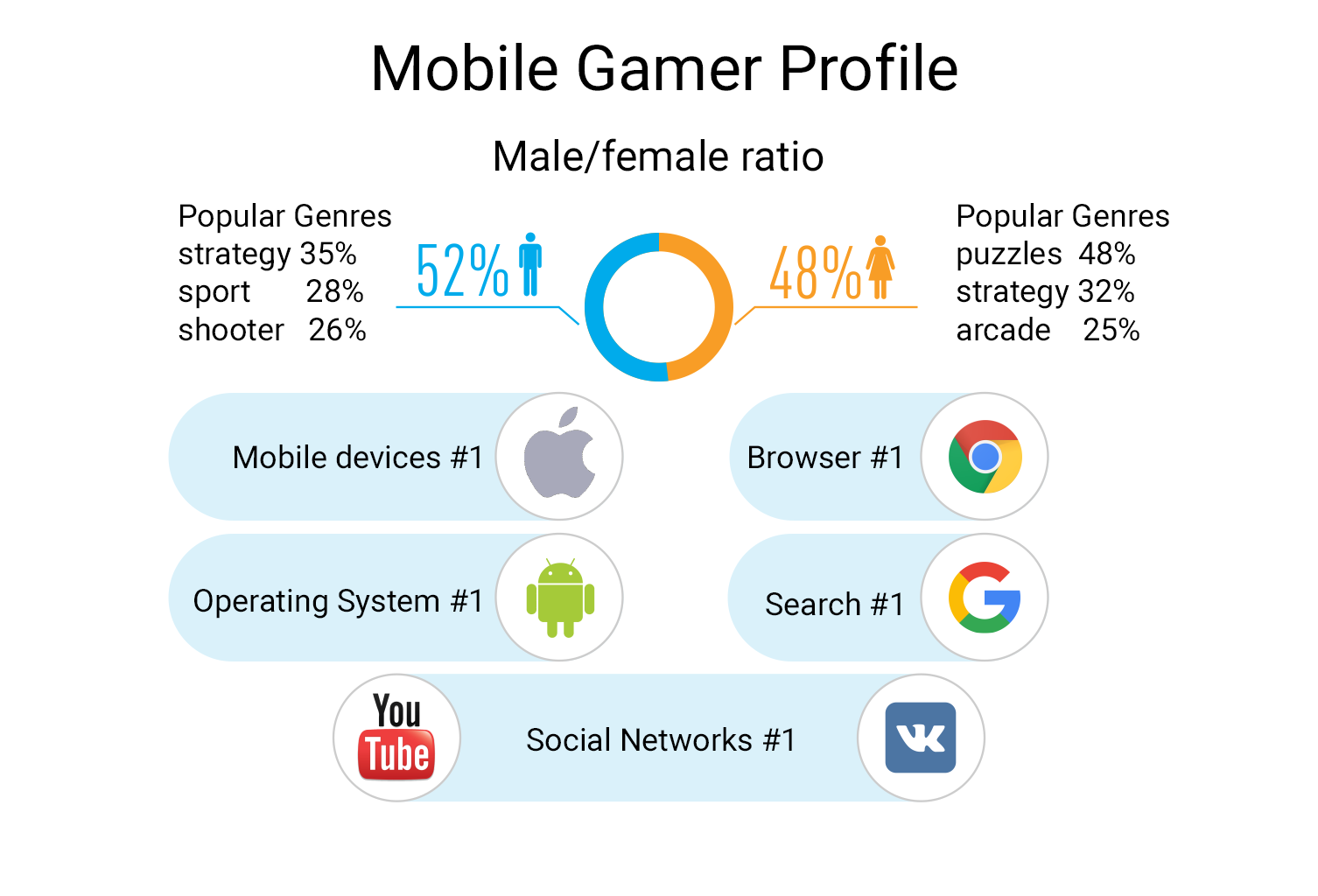 It is expected that the most paying segment is gamers aged 25-35, while gamers younger than 24 years old generate up to 30% profit. Most payments are made on first days after an app is installed.

Women log in more often, but men pay more often: 48% men and only 32% women are ready to pay for game content. 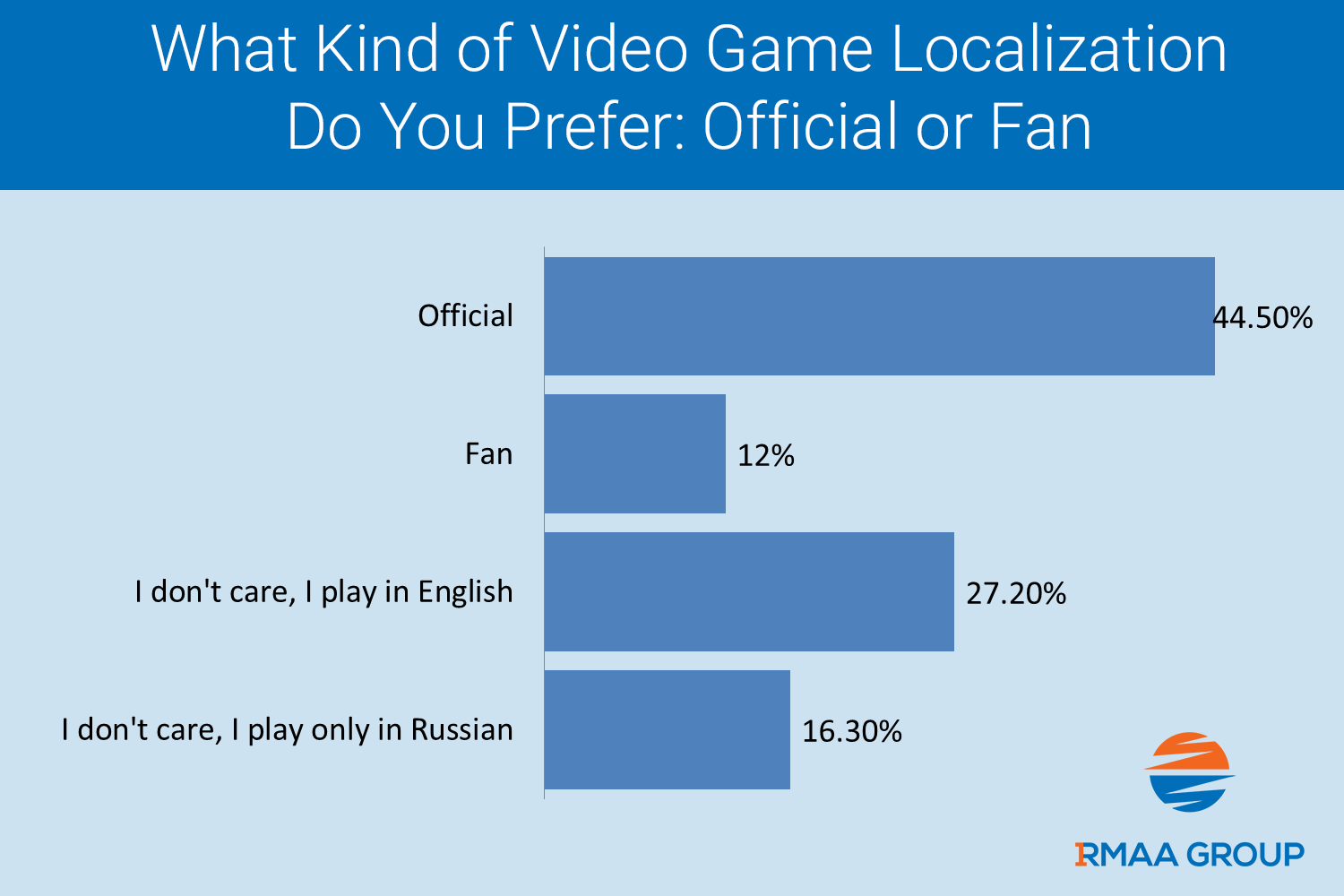 Top developers earning in the Russian market are presented by companies from a variety of countries: Israel, Finland, Lithuania, Turkey, and China. Among Russian developers, Playrix is in the first Top 10 (the company’s headquarters are in Ireland, but production is centered in Russia). This company is also on the global list of mobile game developers, taking the 32nd place.

According to App Annie, the top ten Russian market majors in mobile game development, as of July 2018, are the following companies:

On April 8, 2019, M.Video-Eldorado Group, a Russian electronics and household appliances retailing company, shared the results of development of the console and PC game retail market as of 2018. In total, Russians purchased nearly 2.2 million material copies in the amount of nearly 4.5 billion rubles, which is respectively 5% more in units and 13% more in cash than one year before.

As estimated by analysts, the driver was games for PS4, Xbox One, and Nintendo Switch, which share reached 80% in units and 90% in cash. The demand solely for console games increased by 13% in units and 16$ in cash up to 2.1 million units and 4.4 billion rubles respectively. In the conditions of the console market growth, the PC game share fell to 5%. The combined share of M.Video and Eldorado in video game retail sales exceeded 50% both in cash and in units.

Nearly 70% console game market in units and 75% in cash are taken by PlayStation 4 games, the demand for which has grown by 30%.

Xbox One games carry on demonstrating positive dynamics — 16% increase in units and 23% in cash — while the demand for Xbox One software dropped by 45%.

The popularity of the Sony last-gen platform is explained by a large number of high-quality titles and release of such exclusives as God of War, Detroit: Become Human, Spider Man and others, as the company explained. At the year-end, three releases at once hit Top 5 of the most saleable ones. FIFA 18 by Electronic Arts became a leader, while the fifth place was taken by the latest version of this very football simulator, FIFA 19, which jumped ahead of another most expected release of Red Dead Redemption 2.

Nintendo Switch game sales demonstrated overweight growth rates and increased 2.5 times in units and 2.2 times in cash. The console game share reached 7% in cash a bit more than in a year after the entry into the Russian market. Nintendo Switch is peculiar with its own game franchise, exclusive Nintendo Labo Kits, as well as amiibo interactive figurines and cards.

Xbox One games carry on demonstrating positive two-digit dynamics. According to M.Video-Eldorado, within the year Russians purchased 16% more in units and 23% more in cash for the Microsoft last-gen game console, while the demand for Xbox One software dropped by 45%.

Wargaming shared data on how much Russian gamers spent on free-to-play console games in 2018. The segment turnover equaled to $59.6 million. This is 19% more than a year before.

Apart from that, the company shared the list of the most successful console free-to-play games in 2018 among Russians:

Russian market is one of the most attractive ones for foreign developers. Firstly, there are almost 65 million online game lovers in Russia (read more about Russian gamers in our article). Secondly, the market has next to none national game content to offer, that is why users are happy to play foreign novelties.

If you developed a game and do not know where and how you want to promote it, pay attention to the Russian market, and our experts will not only tell you about prospects of the entry into the Russian market, but will also help elaborate a marketing strategy to win hearts of gamers living in the biggest country of the world.