As mobile consumption increases, so does the importance of mobile ad formats. If earlier mobile advertisement was perceived by many advertisers as a secondary promotion tool, and its budget for it was distributed on a residual basis, today marketers have a perceptual unity of this tool as one of the key ones.

More than 32 million Russians use only mobile devices to access the Internet.

Every day Russians spend much more time on the Internet on mobile devices than on desktop. And this applies to absolutely all age categories. 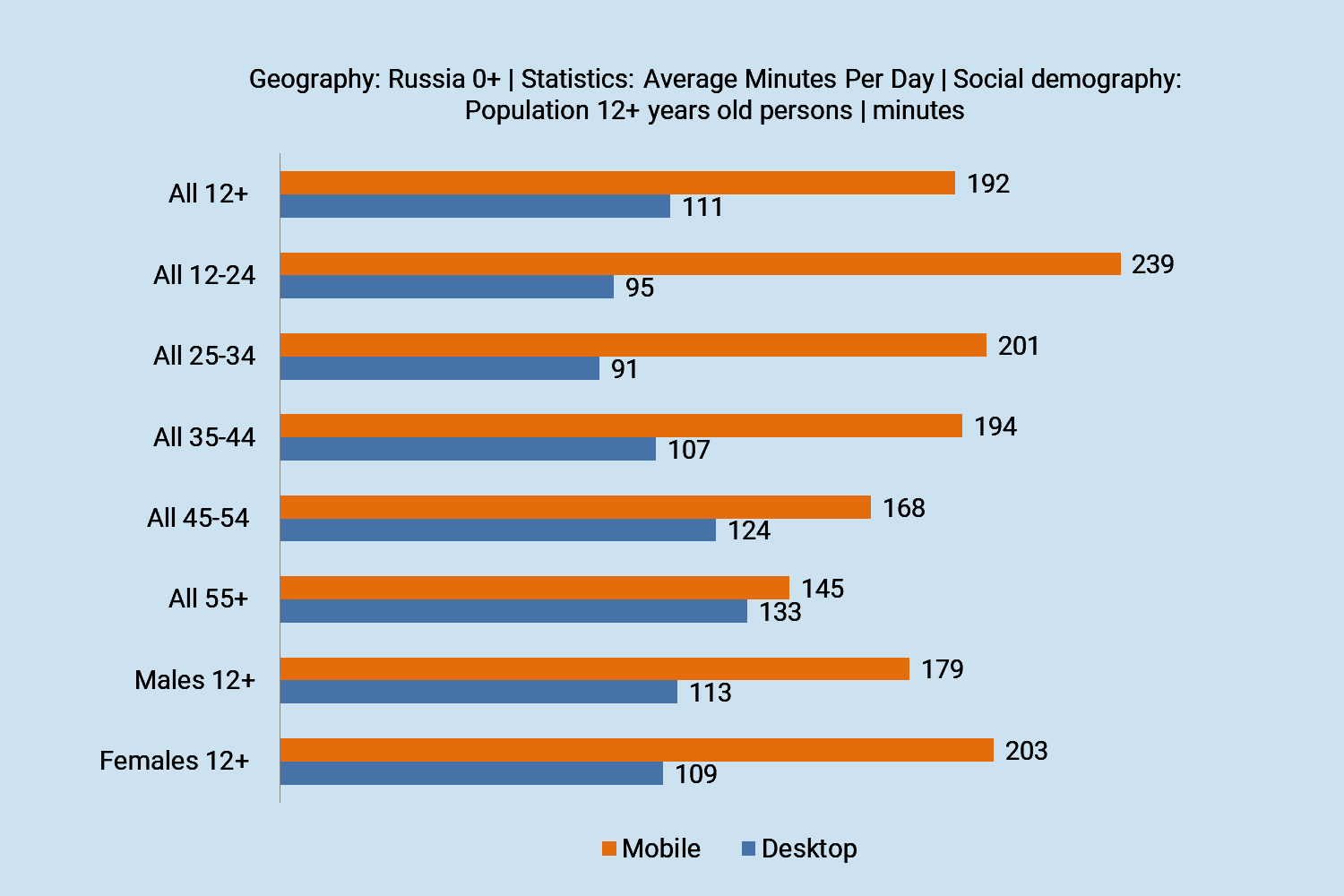 Within framework of monthly usage by audience Google leads the way in Russian mobile service. If we talk about daily use of mobile resources, the leaders among Russians are Whatsapp.com messenger (with daily coverage of 40% of the mobile audience) and Vk.com social network (with 29.5% coverage), Google takes only the third position with 29.1% daily coverage.

According to MY. GAMES* data, 85% of all Russian players played mobile games once a month. The audience for mobile games is evenly distributed between men and women. Thus, the male part of the audience prefers to play competitive and tactical genres (military simulators, shooters, Battle Royale, action games, strategy games), while female – casual (music, time management, simulation of life).

*The survey involved more than 1.5 thousand people aged 15 to 44 years.

According to results of the IAB Russia survey, 58% of all mobile advertising expenditures in 2018 were made up of ads on mobile sites, while the remaining budgets (42%) were spent on ads in mobile apps.

Advertisers in e-commerce, Internet services and games categories, on the contrary, spend almost whole of their budget on advertising apps, and a small part (or nothing at all) on advertising mobile sites. 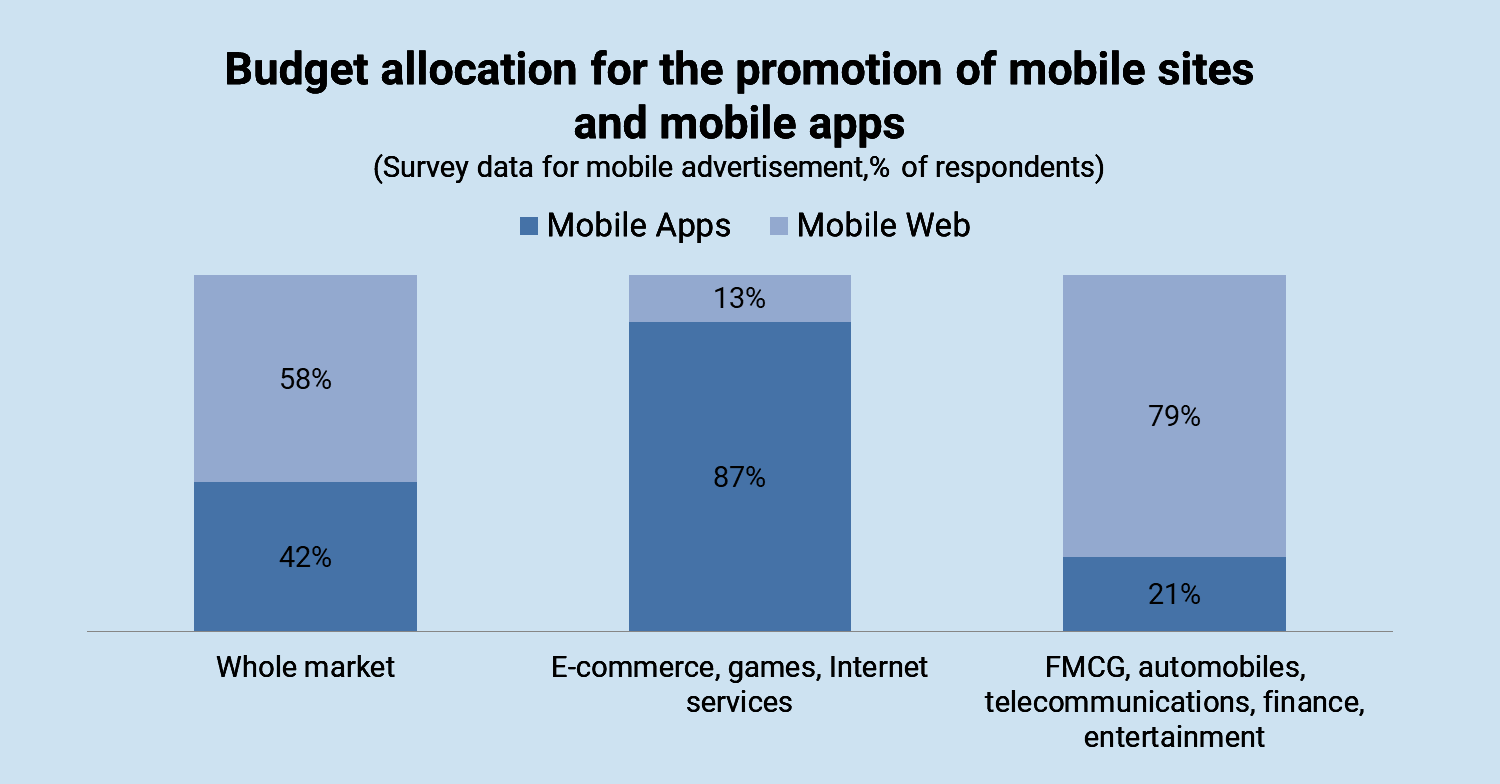 The Russian market of video games: total of 2019

According to MY.GAMES estimates, volume of the Russian video game market in 2019 increased by 14% YoY and amounted to 120.4 billion rubles. The main growth driver in 2019 is mobile games (+49% to 48.1 billion rubles), which almost caught up with free games on PC against the background of slowing growth of the latter (+5% to 49.1 billion rubles).

According to ResearchAndMarkets.com data, the global market for smartphone and tablet games will grow from $58.3 billion in 2019 to $97 billion in 2020. This growth is largely due to the impact of the COVID-19 pandemic on the mobile gaming market.

According to our analysts' forecasts, the Russian mobile games market is also expected to grow in 2020. And if in 2019 users spent $744 million on mobile games in Russia, this year this figure may well exceed the $1 billion bar.

As for mobile advertising, Dentsu Aegis Network forecasts that its global market share will exceed that of television in 2020. TV is expected to account for 31.5% of the global advertising market, and mobile – 32.1%. In 2020, mobile advertising will show an increase of 16.5% to $172.6 million.

This trend is also observed in the Russian market. Dentsu Aegis Network analysts forecast that in 2020 volume of mobile advertising in Russia will increase, and spending on mobile will reach 50% of digital budgets.