Tips for Marketing Video Games Across Social Media in Russia

Social media for gamers is a place where they can learn news about their favorite game and just communicate with same game lovers. For game developers, social media is a unique opportunity to get feedback from active gamers, as well as promote their game and cover a new audience. At that, we should keep in mind that direct ads in social media for gamers will not be very effective if you are targeted at a wide audience. This is what we are going to discuss in our article about games social media marketing.

As VKontakte is the most popular and inclusive social media network in Russia, many Russian-speaking gamers dwell at this very platform. For video games social media marketing, apart from standard targeting settings, there is an option to gather the most relevant audience and target ad impressions at it. We mean targeting at community members that is available in the VKontakte advertising account. All you need to do for social media marketing for games is to collect a list of groups with the target audience of gamers. In our article below, we will look into several categories of groups where gamers can be found indeed.

This is the largest and most obvious category of public pages for gamers in VK—if a person is subscribed to a group devoted to news of a certain game, it is highly likely he or she plays or used to play it, especially when being subscribed to several groups devoted to news about this game or a particular genre.

All you need is to make a list of game competitors, find their groups, and then set targeted ads at audiences of the publics found.

Thematic VK pages for gamers have a much wider audience, as compared to the previous category. That is why, if you are aimed at large coverage and widening the target audience of your game, we recommend you paying attention to both top groups and ones with a narrower theme (for instance, by game genre).

As for this issue, we eased the search for you as much as possible and made a list of Top 10 VK public pages and groups for gamers that you will find in our White Paper Guide to Online Games Promotion in the Russian Market.

There are services that are, in fact, game aggregators and distributors: this is convenient both for game developers and for gamers because they can play via a single platform, interact with friends, and share things.

For PC, there are several largest cloud systems like that:

You can gather the audience of every platform to get those who play games and are hosted at these platforms.

As for consoles, the situation is a bit simpler because there are three main ecosystems:

3. Nintendo from the self-named company

The logic is simple—whoever has one or another console is subscribed to groups devoted to this console (although one should also definitely consider the audience of ‘dreamers’ because a console, taking into account high game prices, is a luxury).

Logically, gamers will read those portals/mass media that tell about games: rumors and facts about future games, game tips and reviews—in one word, all game aspects of gamers’ life.

You can also find top gaming media in our White Paper Guide to Online Games Promotion in the Russian Market. It is best to look for groups of themed portals by a specific name because they have a lot of crossings, and in-VK search will show too many irrelevant groups.

Let’s players and streamers are also on a constant hunt for new games for reviews that is why communities where they hang out must be included into the promotion strategy. This is especially the case of publics of beginning streamers—here you will get a double advantage: your game review, on one hand, and a new player, on the other hand. Besides, your main target audience—gamers—is located in such publics, too.

Events play an important role in game promotion. Moreover, large conferences and events also gather their own audience in social media. Core fans often buy tickets to take parts in events in person and get a lot of impressions and, consequently, subscribe to updates in the very VK.

To gather the audience and set up ads in social media afterwards, we recommend the following events in the game industry:

There is no doubt that this list of events can be expanded with smaller ones, including regional—it all depends only on your target audience and Russian regions, at which, as a result, your game advertising and social media marketing campaign will be targeted.

What Formats of Social Media Ads Should Be Included into the Video Games Marketing Strategy?

Our practice shows that it is best of all to use a combination of several formats, for example, a teaser and a promo post. At the same time, you must track metrics of various formats to redistribute budgets to more conversional ads.

You will find all formats in detail in our article VK Ads: A Type Guide.

What images attract potential gamers best? Game interface screenshots, where a character leveling window with their inventory is seen, work well, as well as screenshots depicting some game actions: magic flashes, damage numbers, action records during battles, etc. Besides, short videos demonstrating gaming process really do the thing (especially ones from colorful and dynamic games). To sum up, test and choose an optimal placement option for your very game. 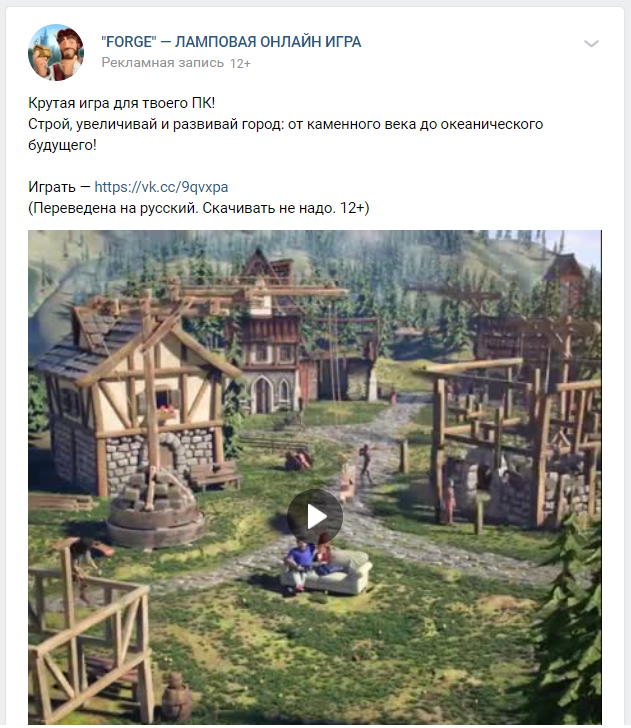 How a Game Can Conquer Audience of Social Media

In our article, we have considered only some nuances of social media marketing. If you decided to promote your game in the Russian market, but do not know what strategy will suit your particular project, the team of experienced marketers and gaming industry analysts RMAA Games will help you elaborate a strategy to win hearts of gamers from the largest country of the world.