Streaming has ceased to be a gamers’ prerogative long ago, turning into a real trend of modern times. However, gamers and let’s players are those who take dominant positions among YouTube bloggers. This trend is observed both in the world arena, as the very gamers became top paid YouTube bloggers at year-end 2019, and in Russia where let’s players take leading positions among Russian-speaking bloggers.

Streaming has already expanded beyond the gamers’ simple entertainment for quite a while. Today, large companies from different areas (not only game developers) actively cooperate with streamers in order to advertise and promote their products and services. The Russian game streaming market in 2019, according to various estimates, has made from 15 to 20 billion rubles. As experts believe, the market has a high growth potential, up to 20% yearly, where the COVID-19 pandemic can become an extra push. At that, it can be seen already that the streamers’ content becomes of better quality, just like audiences of their channels. All this lets advertisers (game producers and not only) make more efficient advertising collaborations with streamers.

Top 5 leaders in terms of the number of subscribers have remained unchanged since the beginning of 2020—there have been only minor position moves inside the top, but, in general, the channels go on gaining popularity and keeping dominance. From February until August 2020, the audience of Marmok, a permanent leader, has grown by 1.6 million. Although the number of video views on the channel has increased, too, Marmok takes only the 12th place as per views rating, while Funny Family Games tv became the views leader—with 4.4 million subscribers, the video views on the channel hit 5 billion.

The channel of Aid [VyacheslavOO] has gained 0.7 million subscribers from February until August 2020 and rose from the 5th to the 4th place as per the number of subscribers, while it takes the confident 3rd place by views.

Meanwhile, TheBrainDit retained its 8.3 million subscribers, which let it stay in Top 5 leaders, but the channel fell from the 2nd to the 5th place from February. As for the views, the channel takes the 5th place, too. 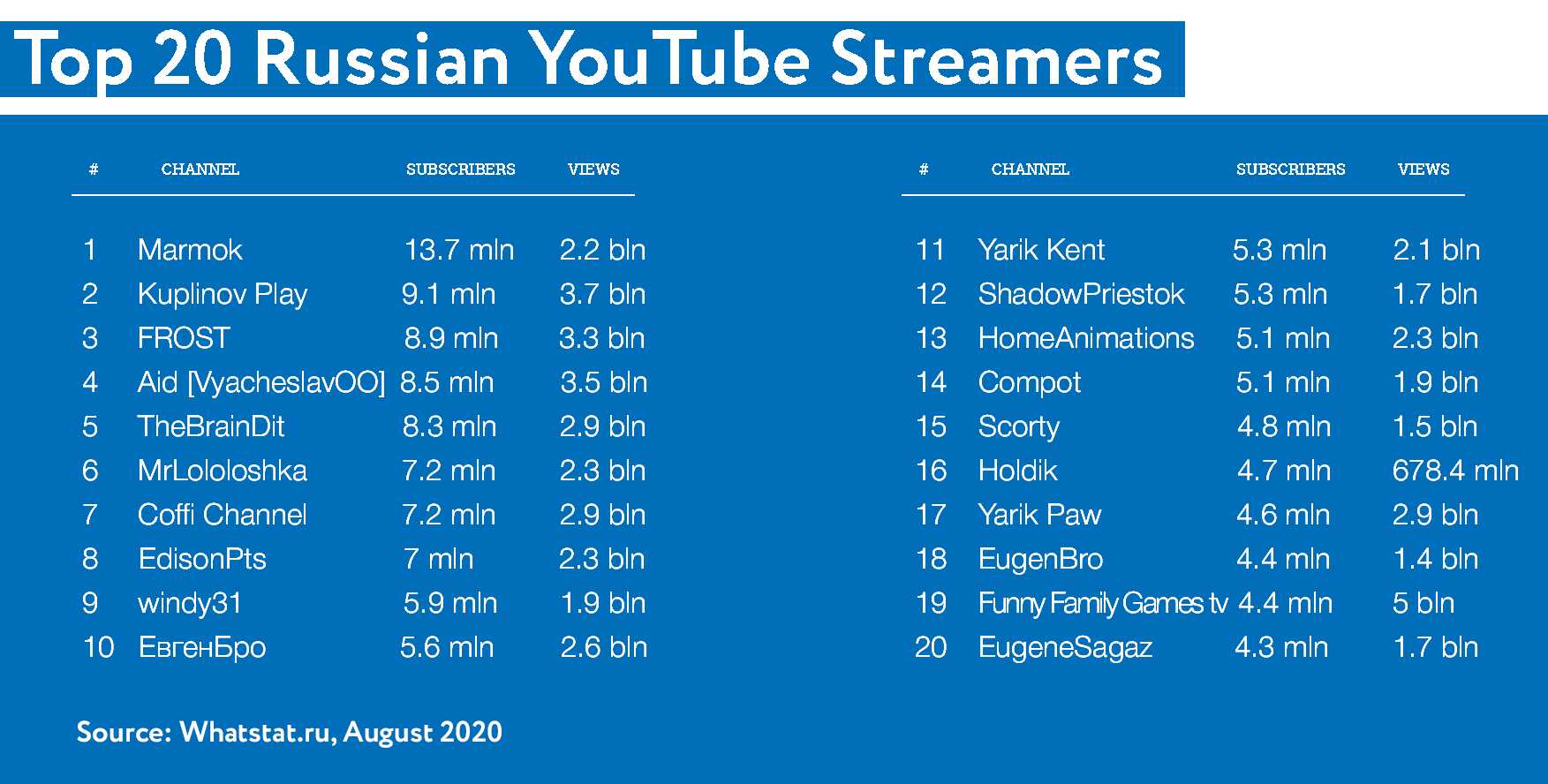 Speaking about the YouTube rating of bloggers in June, which is prepared by Brand Analytics from time to time, let’s players took 13 positions out of 20.

A let’s player EdisonPts rose to the 2nd place of the rating by engagement. The blogger’s name is Eduard Perets, he is 25 years old and one of the first Russian-speaking let’s players on YouTube. Eduard makes videos about the Minecraft game.

There are 5 newcomers in the June rating. Three of them are let’s players as well: Minecraft players Compot (4) and EvgenBro (16), as well as Gaming with LINE recording the walkthrough of Brawl Stars (8). 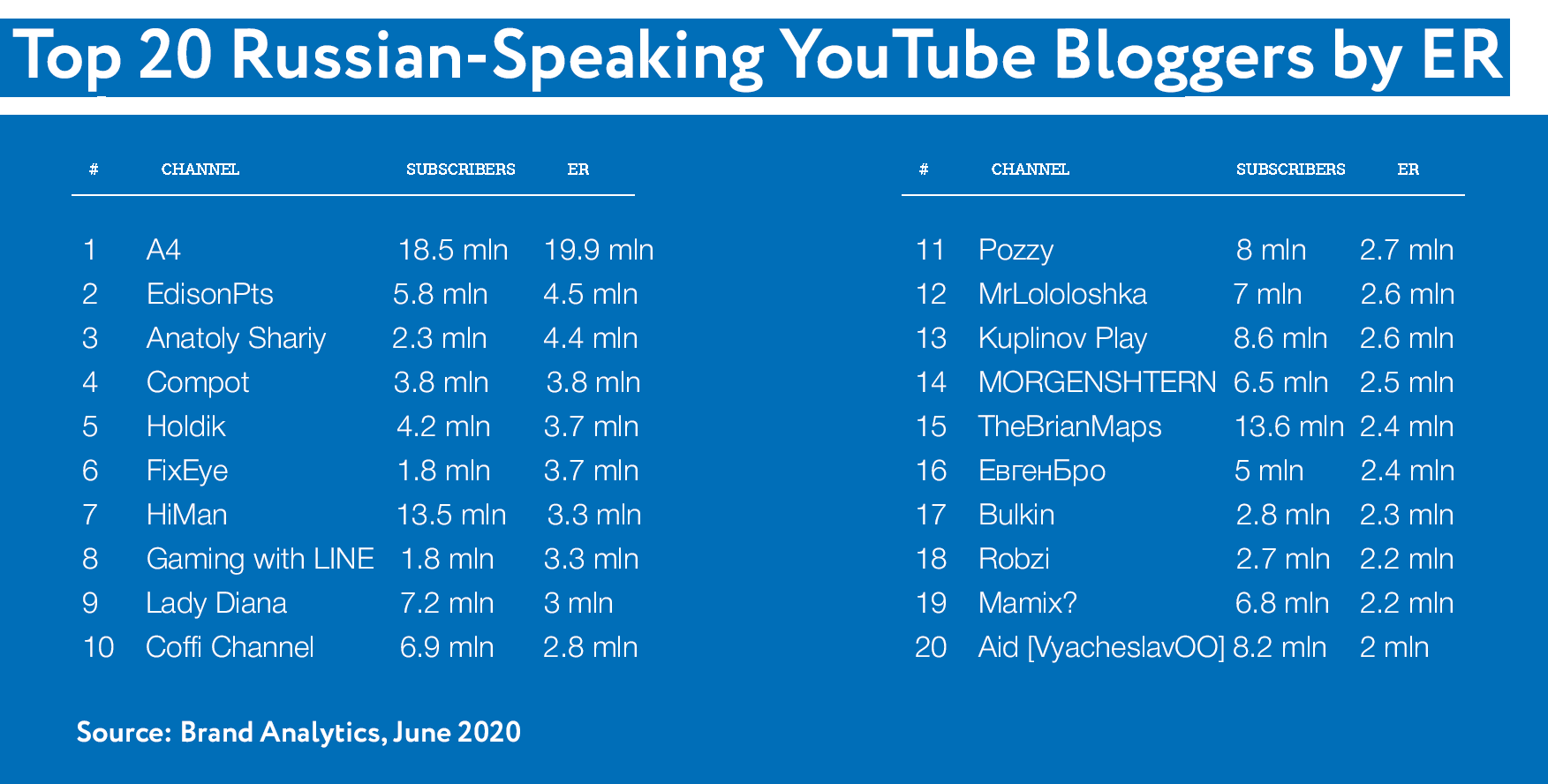 *The rating is built on the basis of engagement metrics, or the sum of all user reactions: likes and comments. For the purposes of calculation, more than 130 million publications in the Russian-language YouTube segment were analyzed in June 2020.

According to Mediascope Web-Index, the monthly audience of YouTube in Russia exceeds 84 million, while the daily one is 38.5 million users with middle and upper-middle income. Thus, if you have an online promotion budget, YouTube can become one of your main advertising channels, while interesting integrations on YouTube let brands not only reach, but also conquer audience because the goods are recommended by their very favorite blogger and not via an annoying ad video.

The bloggers’ prices for ad impressions depend on the average number of channel viewers, subscribers, repetitive views, whether a blogger uses a web camera, whether he or she swears etc. In order to assess how effective one or another integration was, we recommend to assign individual promo codes to bloggers or use UTM in links to your website.

RMAA Agency experts will help you select channels for the goals and objectives of your brand in the Russian market, choose the most efficient formats of ads placement, and undertake all practical arrangements regarding cooperation with Russian-speaking YouTube bloggers.