Brand Analytics monthly provides a list of Top 50 Russian-language YouTube channels for the previous month. The rating is based on not only the number of subscribers, but also user engagement.

Key rating metrics are engagement, or the sum of all user reactions: likes and comments. That is why Brand Analytics ratings may fail to match with others because they are based, as a rule, on the number of subscribers and reach; however, engagement of many million-plus accounts is not high. Nevertheless, this indicator is very important because it is the one that tells that a blogger is not only watched, but also supported.

Bloggers working with games are becoming more and more popular, and games remain a leading theme of the engagement rating: out of Top 50 channels of all themes and issues, let’splayers, reviewers, and streamers took 19 positions and got almost 24 million comments and likes in total in March 2019.

Today, we will zero in on Russian-language YouTube gaming channels that hit Top 50 by engagement. 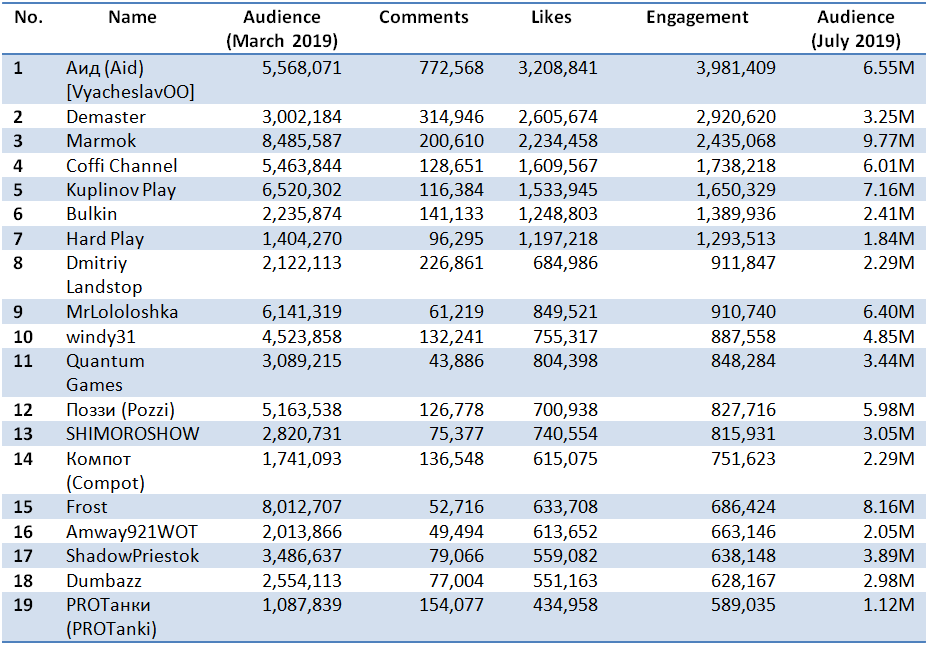 The rating leader is Aid, a Minecraft let’splayer, having more than 6 million subscribers and more than 2 billion video views on his channel. He uploads 2-3 videos a day, each of which gets at least half a million views. Interestingly, the second place is also taken by a Minecraft devotee. Demaster is no less productive in video creation, uploading 2-4 videos a day, but the number of views is 2-3 times less on average than the leading channel has. Besides, channels of MrLololoshka, Compot, ShadowPriestok are devoted to playing Minecraft.

An outstanding feature of videos on Marmok channel is a peculiar sense of humor of its author and a passion for finding various bugs in games. As users note, ‘Marmok will find a bug even in Tetris’. Videos appear on the channel once a week, getting 4-5 million views, hundreds of thousands likes, and dozens of thousands comments. Every video starts from an ad, but it goes so fast and subtly that it clearly does not arouse negativity of users and subscribers.

The eleventh channel in the rating, Quantum Games, is on the same page with Marmok, recording bugs and funny moments in such games as GTA 5, GTA Online, CS:GO, as well as many funny let’splays and walkthroughs. Besides, on his channel one can watch various selections like ‘Top 10 hell bugs’, ‘Top 10 games for slow PC’, etc.

Bulkin is notable for his passion for cars. The blogger uploads videos of both virtual test drives and races and real ones. What is more, during the walkthroughs he emphasizes driving as well.

Pozzi makes reviews of games mostly created on Roblox. Pozzi uploads his reviews daily (2-3 reviews a day), and users ask play one or another game and upload a walkthrough on the channel in comments.

Channels of Coffi Channel, Kuplinov Play, Hard Play, Dmitriy Landstop, windy31, SHIMOROSHOW, Frost broadcast reviews and streams of various games from GTA to Mortal Combat, not sticking to one of them.

Like the channels above, Amway921WOT broadcasts walkthroughs of various games, but the key ones on the channel are videos with reviews of tanks and streams of one of the leading PC games in the Russian market, World of Tanks.

Dumbazz channel presents various videos of CS:GO mixed up with trolling that is clearly a cup of tea for his subscribers and viewers.

The last place in the rating is taken by PROTanks. The channel’s name speaks for itself: the channel daily provides edutainment videos, reviews, guides on WOT and not only, like reviews, streams, and walkthroughs of many other iconic games.

As you could rightly note, there are only 19 channels in our list, but we promised 20.

It’s no secret that YouTube kids’ channels are currently the hottest new trend. Children grow up and start playing games and creating separate channels for them. An example of such a channel that closes Top 20 of our rating is one more popular project of a no less popular channel Viki Show (5.1 million subscribers to the main channel)— Viki Show PLAY. Now there are not so many subscribers to her channel with game reviews (a bit more than 600 thousand), but the number of views is on a par with million-plus bloggers.

Why are blogger kids, as a rule, not on the list of Brand Analytics by engagement? It’s as simple as that: most often, videos have restricted comments, and engagement can only be estimated by likes. So, Victoria’s video about Minecraft got more than 4 million views and 42 thousand likes (as a comparison, a video by leader Aid with almost 5 million views got a bit more likes—44 thousand).

Why Are Streamers So Popular?

There are several theories why streamers are becoming more and more popular.

Firstly, not everyone can touch the heights of e-sports and play at a high level. At that point, streams kick into action where one can see strong players. People watch football, don’t they? They do! Why can’t they watch e-sports?

Secondly, upgrading one’s PC to a level at which professionals play is not cheap enjoyment and not everyone can afford it. In this case, streams are the only option for everyone to enjoy the game. This option is accepted most, that is why live streams are gaining such popularity.

We have already noted more than once that the Russian online game market has a vast potential for development and expansion. So, if you decided to promote your game in one of the biggest markets in the world, RMAA Group experts will help you create a strategy of winning hearts of Russian gamers.

Download our “Guide to Online Games Promotion in the Russian Market” and learn more about Russian video games market.