What and how did Russians buy on the Internet in 2019?

Percentage of all Russian residents aged 16-55.

According to GFK Rus Omnibus, 2019

The major reasons why Russians buy in online shops do not change: this seems to be a rational way to spend their money and time. Nearly 60% of respondents see an opportunity to compare prices and buy goods cheaper than in a common store as an advantage. Almost half of respondents tell that they like learning reviews of other people, shopping in any place and at any time, and not wasting their effort on shopping trips.

Every third respondent made his or her last online purchase from a smartphone or a tablet. Compared with a year earlier, the share of such orders has grown by half.

Purchases are made from mobile devices more and more often

The share of respondents who made their last order in an online shop this way.

The goods the online demand for which grows best are FMCG: baby care goods, food and drinks, household goods, chemicals, and dishes. In 2019, these goods were ordered by 30% more respondents. The slowest demand increase is for color cosmetics and perfumes (+4%), as well as on mobile devices (+9%).

Percentage of respondents who bought at least one thing in this category for 12 months. 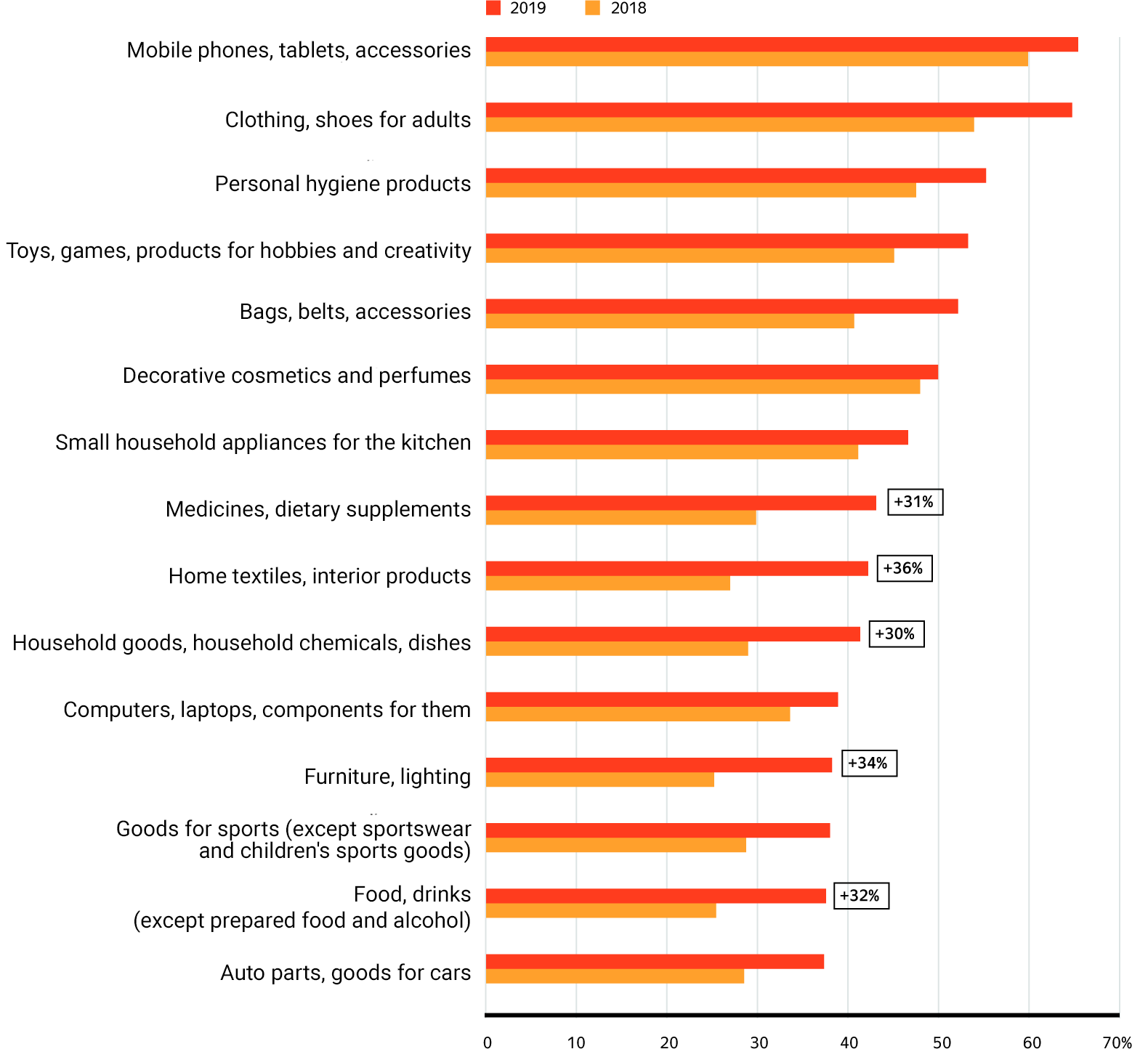 The popularity of prepayment by card is growing: while two years ago this method was used by half of the buyers at least once a year, there are almost two-thirds of them already this year. At that, the share of respondents who named this way as the most convenient one grew just a little, from 25% to 27%. Most people consider card payment upon receipt of goods the most preferable payment method, and their share is growing: 36% buyers said so last year and 43% this year. This method was used by 48% of respondents.

Percentage of respondents who used this payment method in a Russian online shop at least once during 12 months.

The most widespread way of delivery is pickup from a store, a pick-up point, or a parcel terminal. At least one of these options was used by more than 90% of respondents. Parcels from parcel terminals are now received by a relatively small part of online buyers, but their share is growing—this year, it has exceeded 20%. While, according to the results of a last year study, this delivery method was called preferable by 6.5% of respondents, there are already 11% of them this year. Other popular delivery methods, on the contrary, began being called most convenient a bit less often.

Percentage of respondents who used this method of delivery from a Russian online shop at least once during 12 months.