Overview of the largest outdoor constructions in Moscow and Saint-Petersburg

Massive advertising construction placed on the fine overviewed place with number of contacts is a source of pride to any company. For a long time, large brandmauers and banners have occupied city facades in Moscow and Saint-Petersburg. Recently the situation has changed significantly: Russian government started to control outdoor advertising. There are not many large constructions anymore.

To know more about the most noticeable advertising constructions, trends and situation in the outdoor advertising market in Russia, read in RMAA Group blog. 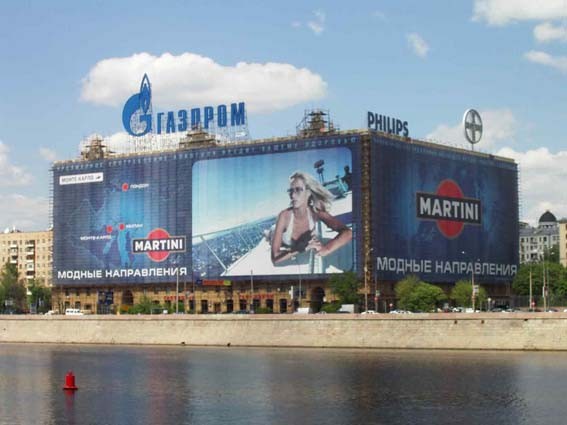 The time when advertising constructions occupied any planes in the center of Moscow and Saint-Petersburg to attract potential customers is gone. Adverts used to be placed on the facades, construction mesh, even roofs. Streets used to fulfill with advert banners. Now it is all different.

In recent years, authorities of both cities has launched different activities in limiting and sorting outdoors market. We can name several reasons for that:

• Ad constructions increase a dangerous situation over the traffic.

• One of the reason to reform an outdoor marketing is an opportunity of redirection profit into the City Treasury.

Now, disposition of outdoors advertisement is regulated by large number of limitations like districts of posting, types of constructions and advertising goods. It is strictly necessary to know all the restrictions to follow them. However, it doesn’t mean that there are no large advert constructions. Today there are few of them and they are not located in the city center, but they do exist.

For example, the largest in Europe media facade is on the Hydroproekt (Hydroproject) building in Moscow at building 2, Volokamsk Highway. Currently – Samsung Galaxy S7 Edge, the Samsung’s flagman Smartphone, is disposed there. 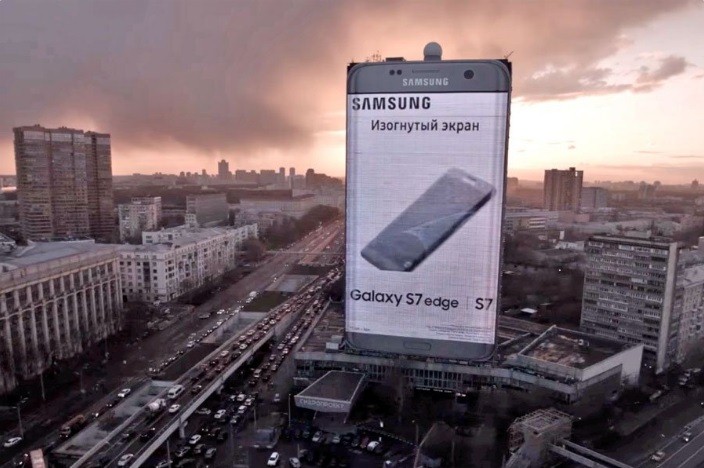 This building has been used for advert constructions for a long time and it still looks really impressive. Media facade size is 80 – 48 meters, total yardage is 3840 sq. meters. 800 000 people is a daily auditory of this advert.

One more building that is used in the advertising purposes is located at building 2, Noviy Arbat street. 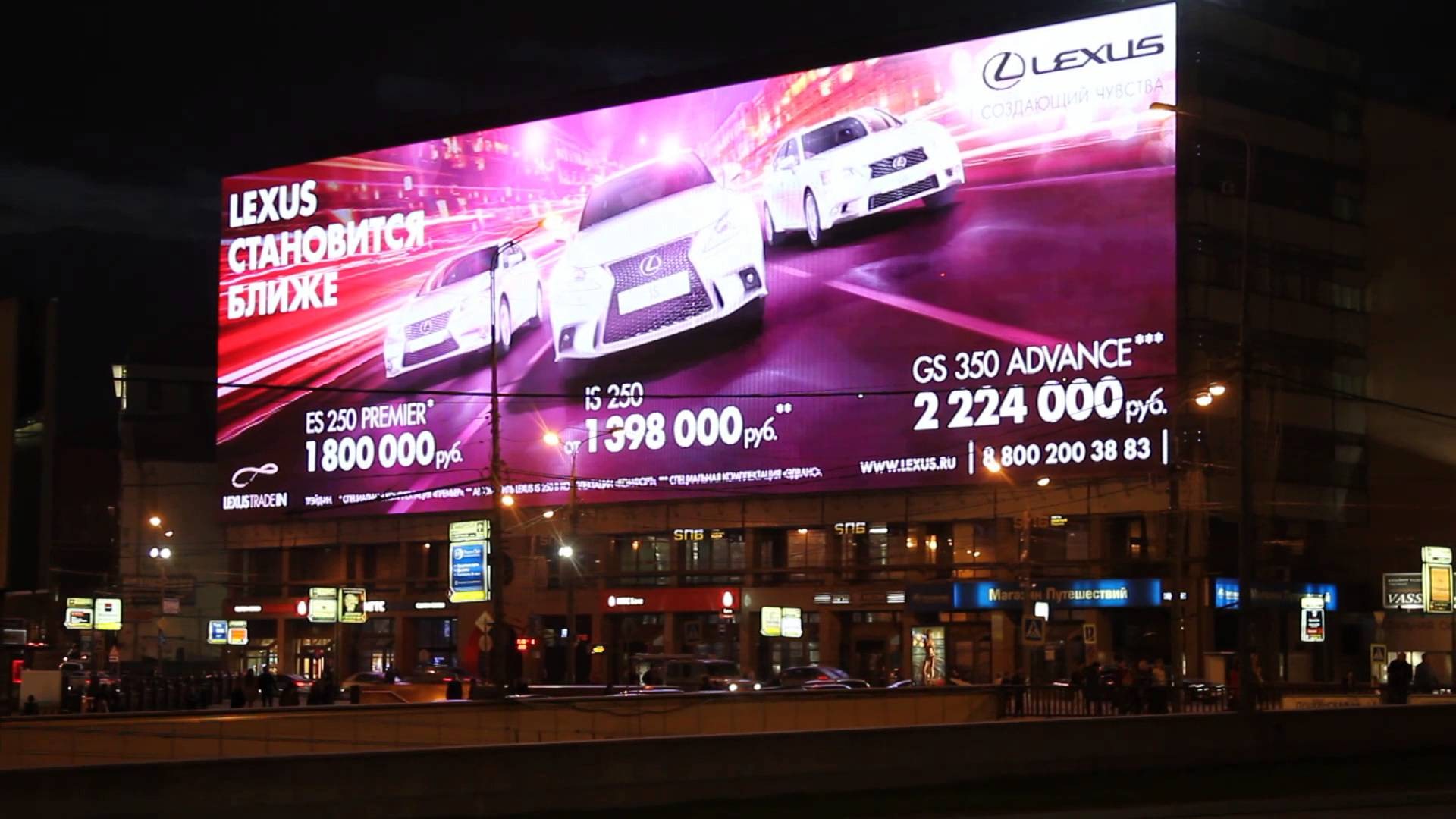 This media facade is demostrating several video commercias in turn. The size of advertisng construction is 75 to 24 meters and total yardage is 1800 sq. meters.

The third biggest media facade is located at building 5, Entusiast highway. The construction is located on the square exhibition center. 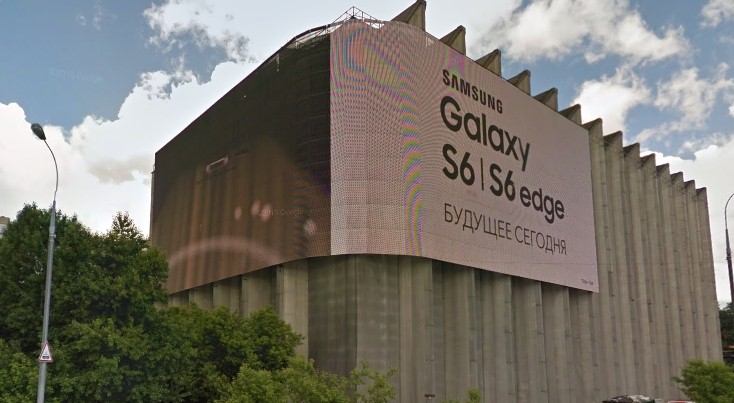 This construction has 75,2 to 20 meters with 1500 sq. meters. As with previous media facade, several video commercials are also being performed turn by turn here. Each of them is being demonstrated 288 times per day.

These are the largest outdoors advertising constructions in Moscow. Currently there is a list of authorized media facades in Moscow, and by 2014 it contained only 11 addresses. The List is expanding slowly, and obviously will grow further. All the other large advert constructions in Moscow, except media facades, are prohibited. Only usual 3x6 billboards are permitted, as well as some medium size roof installations and many lesser size advertising formats: buss stops, road signs, urns, toilets etc. Also it is permitted to build unique advertising construction, but it takes great effort to get the approval for building.

Considering Saint-Petersburg, the situation is quite ambiguously. Large advert constructions are less regulated but they still require an approval. Often, ad constructions are placed on the facades of repairing buildings. For example, whole building of Frunze Department Store used to be covered by an enormous banner of Michailovsky theatre for a long time. 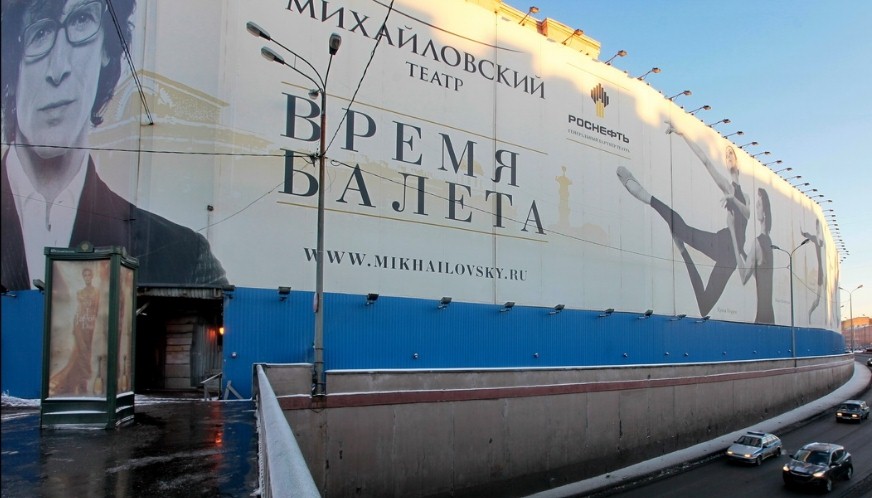 The banner is currently removed. 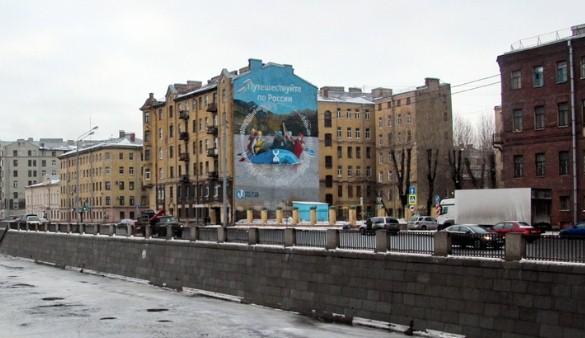 But media facades of Saint-Petersburg’s stay far behind Moscow ones. The largest media facade located at building 105, Moscovskiy avenue. Its size is 16 to 9 meters and total yardage just 148 sq. meters. 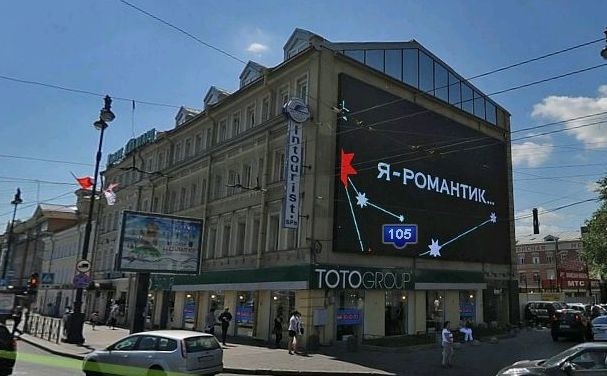 Speaking about the situation with outdoors advertising market, we can note a clear move towards the growth of regulations of this sphere by authorities. Also, the number of outdoor adverts in historical centers is decreasing, either in Moscow or in Saint-Petersburg as well. Authorities in both cities have been successful in that, and no doubts regulation will continue to grow.

By the way, the GOST (the State Standard) which regulates publishes and posts of outdoors adverts, has became necessary for executing since spring 2016. It used to have just recommendatory character. Experts say that GOST’s strict prohibitions will lead to massive deconstructions of outdoor adverts and strong decrease of market volume. However, active operators gained postponement till 2020, so they will frame their current constructions under the State Standard’s requirements.

Thus, the Russian outdoor advertising market is permanently changing and developing. However, state regulations and limitations of platforms will probably continue, so there are not going to be many large advertising constructions. If you are interested in disposing outdoors adverts in Moscow or Saint-Petersburg, RMAA Group specialists are ready to help you to find the most optimal variants of disposing adverts according either to your tasks and Russian laws.