In 2005, the company “Deca” began to produce kvass (traditional soft drink) “Nikola”. Brand name is the archaic reduction of the Russian name “Nikolay” which highlights traditional and archaic character of the beverage and appeals to the liaison with national roots. At the same time it sounds like “notcola”, and this is not a coincidence. The task set by marketing managers of “Deca”was to create a national scale brand for relatively little money. So they decided to fit in with large multinational brands such as “Coca-Cola” and “Pepsi” and position through their denial.

In 2005 and 2006 the advertising campaigns of “Nikola” focused on natural fermentation technology and using natural ingredients in the product manufacture. This, considering almost total prevalence of surrogates, was a very important feature of the product. Since the beginning of 2007 Russia has adopted a new National Standard, whereby kvass can be called only the product resulting from natural fermentation.

It has become more difficult not to get lost among the competing brands so the company opted for patriotic feelings. For a long time Russia had been separated from the West countries by the Iron Curtain, it had beenliving without usual for the West products, as well as without the aggressive and attacking advertising. When both appeared in Russia one of the symbols of capitalism in the mass consciousness became Coca-Cola (Pepsi appeared in Russia in the 80-s). In modern Russia the rejection of Western culture with its total consumptionis widespread. It was this thatthe product manufacturers and advertising agencies started to use.

At the first glance, such commercial is not focused on the most educated audience, but in brand positioning there is atouch of covert irony. “Kvassnoi patriotism (Jingoism)” is an expression describing a meaningless sense of superiority over foreigners – peculiar to many small-minded people. Furthermore in the slogan “Kvass is not Cola, drink Nikola!” they usedan unacknowledged quotation from a famous book of Victor Pelevin “Generation«P»” - a surreal story which contains a stinging criticism of the consumer society and the advertising industry.

At the brand presentation the press kit, which was distributed to journalists, included a book of Victor Pelevin “Generation «P»” with a bookmark on the spot where the hero is making up a slogan for “Sprite” – “Not cola for Nikola”. It was enough forpress reports to saythat brand idea was plagiarized from the writer. Media attracted some copyright experts to comment the situation. However Pelevin, who from the very beginning of his writing career avoids the public life in all its manifestations, did not take part in the scandal.

In 2007 the first campaign opposing the kvass to Cola drinks was launched. The slogan was “Stop colonization, Kvass isthe health of the nation!”Commercials created by the agency “Instinct”, were translated at national channels. They used the characters of Michael Jackson and Jim Simmons, the lead singer of KISS in the commercial. Thatis how a Russianlooks like after havingdrunkthe American beverage.

People (a family in the first case andfriends in the second case)are strickenafter having seen that someone who had cola drinks transformed into someone obscene. Then the person pronouncing the following text appears on camera: “Do you think this is a joke? Colonization creates an unhealthy atmosphere every day. But who said that you have no choice? Kvass “Nikola”is natural kvass based on fermentation. It is delicious refreshing and invigorating”. After that they revive a poor man with kvass and he returns his original appearance. His friends and family recognize him and rejoice.

Giving explanations about the campaign, the producer wrote: “We do not oppose our cultural values ​​to the world. We are against the imposition of strangerand harmful practice tohave synthetic drinks and rejoice”. However the Association of Advertisers found this explanation unconvincing and lodged a complaint with the Federal Antimonopoly Service, concerning the incorrect comparison of the advertised product with the others which are in circulation. The commercials were banned, but in fact that was the thing the advertiser aimed at. “Deca” took them away from the air; however, they left a slogan that was used in outdoor advertising.

Thanks to the controversial campaign “Deca”raised sales to record heights. In 2007, according to “Business Analysts”, “Deca”owned 26 % of the kvass market.

In 2008, the brand continued the “anticola” line but more subtly. New slogan was “Kvass - yes, chemistry – no”. The same agency “Instinct” worked under the campaign.

The person looking like Ronald Reagan as he was portrayed on cartoons of the Cold War became the campaign identity. He represented the public organization “Russiaagainst kvass”.An agent of the West speaking with a strong accent and distortions persuadedusnot to buy kvass. He said that kvass was a kind of savagery unacceptable in a civilized society. The commercials were created by “Instinct”, which has already approved itselfa year ago.

“We gave the world Shakespeare, shaker, burger, marketing and consulting. We are civilized people with a high culture. And we believe that kvass is out of the culture and morality. Thank you”.

"Do not drink kvass “Nikola”, because it is not cola. You see, I am Russian. I have a hat! You trust me. Thank you”.

The site kvasu.net which allegedly belonged to the anti-kvass organization was created on the Web. They actively usedbroken Russian and caricaturalattributes of “Russianness”: balalaika, bears, ear-flaps hat. In a banner campaign of the site they actively used the Russian football championship.

Nikita Volkov, director of marketing and promotion of “Deca”:

“New commercials were made in the rarely used form - the main character dissuades from “drinking kvass”. It is unusual for modern advertising and contrasts with sugary housewives, wandering from one commercial to another. We appeal to make the conscious choice in favor of natural kvass. We say, do not be manipulated, do not let yourself be fooled, do not deprive yourself of choice despite the dominance of synthetic products. We have something to offer the world – it is natural and healthy kvass “Nikola”.

The calendar from Great design studio was designed in the style of popular vintage Soviet propaganda posters. Slightly modified, but still recognizable silhouette of the Coca-Cola bottle replaces the abstract bottle of liquor. Propaganda of sobriety was very common in Soviet period despite the fact that alcohol like all the other products was produced by the state. 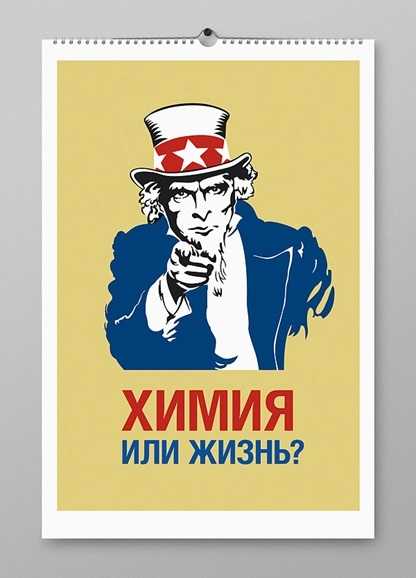 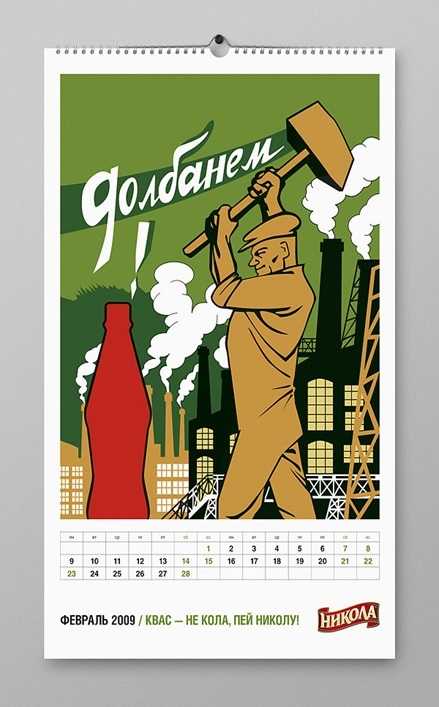 Despite the advertising in 2008, the popularity of “Nicola” declined. The cold summer and the global financial crisis were to blame for. In 2009, “Nicola” is still a standard-bearer brand. Nevertheless the company expands its range of products: it creates the brand “Big kvass” and buys the brand of kvass “StepanTimofeevich” from “Heineken”. They do not run any significant advertising campaigns.

2010 - A year without confrontation

In 2010, the large-scale campaign of “Nikola” starts again, but now the brand is absolutely non-aggressive. There is no trace of outrageous and scandalous mannerwhich the famous campaignsof “Instinct” wereknown for. Now the main characters of commercialsfrom DALEX Productions are the office workers, and the slogan is neutral to full colorless “kvass“Nikola”, drink “Nicola”. Theysupposed that it must represent the brand as a drink for self-confident and self-sufficient people.

Big boss sees subordinate drinking kvass. The boss invites him to his office, and then, while drinking kvass, expresses the intention to raise his salary.

In 2011, the brand returns to the confrontation with the Western world again. It is promoted at the same time as“Big kvass” and “StepanTimofeyevich”. Now the agency “Papa” does advertising. The commercial was criticized quite a lot on the popular website about advertising Adme.ru it was even called the“idiocy of the month”. However, “Deca”says thatthe campaign of the 2011 was the most successful in the history of the brand. Gross sales of kvass increased by 22%.